Even Winston Churchill Was Misinformed Of The Facts

I am often asked questions along the lines of “How do you know your being misinformed?” or “Are you sure you’re being lied to?” The answers are simple. I can prove it through the study of declassified documents and other official material sourced directly from those attempting the ruse. All serious UFO researchers are faced with the same questions, and often the responses are gleefully accompanied by the whipping out of formally classified government documents which have been begrudgingly released from as far back as the 1950’s right through to this very day. And we are spoilt for choice. It could be a copy of the infamous United States Air Force (USAF) “Bolender Memo”; or any of the newer Joint US-Canadian Communications Instructions Reporting Vital Intelligence Sightings (CIRVIS) for “Unidentified Flying Objects” Regulations; or a copy of any the British Ministry of Defence’s (MoD) Defence Intelligence Staff (DIS) DI55 documents that mention UFO’s. Whatever the example(s), any number of hundreds upon hundreds of once-classified documents, even entire files numbering in the dozens of pages, and usually only released decades after creation, plus other material, prove that the nonsense contained within certain agencies’ official media releases and public statements is absolute misinformation, disinformation, and lies. In my last post I eluded to the fact that Sir Winston Churchill may have been misinformed about the UFO issue; and that if the Prime Minister of Britain is misinformed, or outright lied to, what hope do civilian researchers have?

On the 28th of July, 1952, British Prime Minister Winston Churchill became concerned enough about the growing number of credible UFO reports that he wrote a Prime Ministers Personal Minute (found in the file “PREM 11/855 Defence Research” at the old Public Records Office, London) to both the Secretary of State for Air, and to Lord Cherwell (Frederick Lindemann, Churchill’s Scientific Advisor). It famously reads: 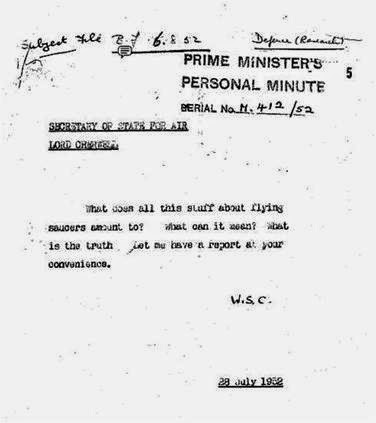 “The various reports about unidentified flying objects, described by the Press as ‘flying saucers’, were the subject of a full Intelligence study in 1951. The conclusions reached (based upon William of Occam's Razor) were that all the incidents reported could be explained by one or other of the following causes:-
(a) Known astronomical or meteorological phenomena
(b) Mistaken identification of conventional aircraft, balloons, birds, etc.
(c) Optical illusions and psychological delusions
(d) Deliberate hoaxes.
2. The Americans, who carried out a similar investigation in 1948/9, reached a similar conclusion.
3. Nothing has happened since 1951 to make the Air Staff change their opinion, and, to judge from recent Press statements, the same is true in America.” 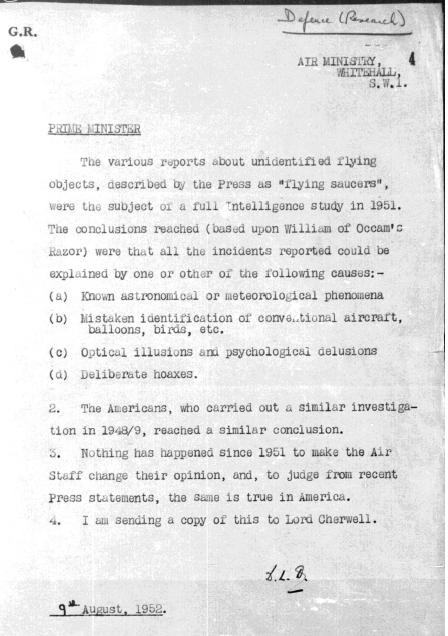 A copy of this report was sent to Lord Cherwell, who wrote to the Prime Minister on the 14th of August, 1952 stating:

The Prime Minister was misinformed. Firstly, the Air Staff were, in fact, unable to explain all the incidences. Secondly, the American’s had not whatsoever “reached a similar conclusion.”.

In a letter (a copy of which UFO researcher Timothy Good has in his possession) from Group Captain Harold Collins, who was the Deputy Director of Intelligence at the Air Ministry, to Ralph Noyes, who was the Head of Defence Secretariat 8 (DS8) an air intelligence Directorate in the Ministry of Defence (MoD), the results of early Air Ministry findings at that time was:

“….we prepared a paper which divided the more recent reports into four classifications:
(1)   Some 35% that could be immediately discounted.
(2)   Some 25% for which we were able to find a definite or probably explanation.
(3)   Some 30% where there was no corroboration of there was doubts about the report and for which we could find no explanation.
(4)   Some 10% where the reporter was well qualified, ie Farnborough test pilot, etc, where there was corroboration and where the report itself carried conviction; but where we could find no explanation.

These figures are rather at odds with what Prime Minister Sir Winston Churchill was handed, of that there is no doubt.

“The frequency of reported sightings, the similarity in many of the characteristics attributed to the observed objects and the quality of observers considered as a whole, support the contention that some type of flying object has been observed … The origin of the devices is not ascertainable.”

“The phenomenon reported is something real and not visionary or fictitious.” 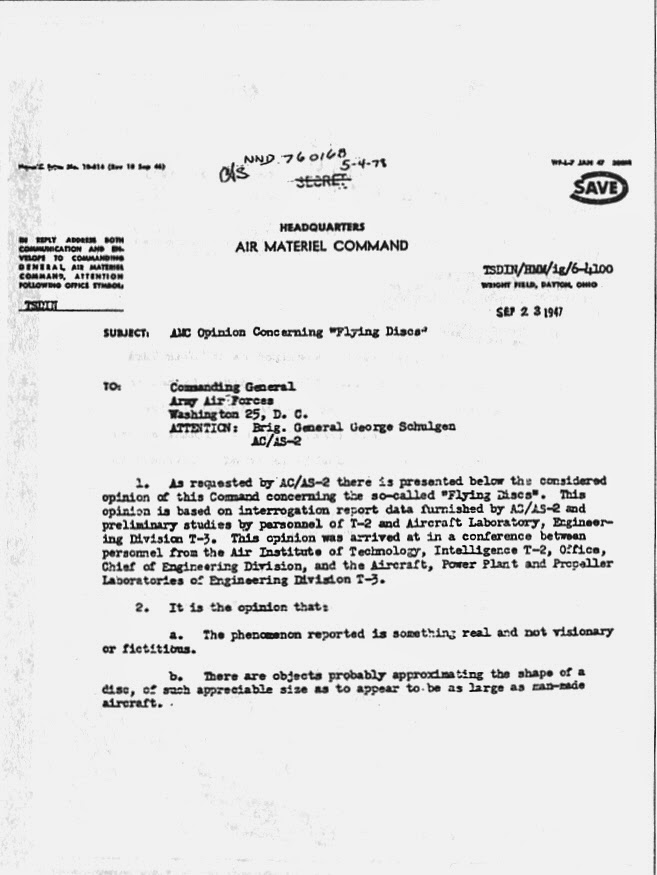 Furthermore, at the time of Churchill’s enquiry, a Central Intelligence Agency (CIA) memorandum, written by H. Marshall Chadwell, the Assistant Director of the CIA’s Office of Scientific Intelligence (OSI) confirms that:

“Since 1947, Air Technical Intelligence Center has received approximately 1500 official reports of sightings … During 1952 alone, official reports totalled 250. Of the 1500 reports, Air Force carries 20 percent as unexplained and of those received from January through July 1952 it carries 28 percent unexplained.”

With this official, formally documentation, it becomes impossible to conclude that the Prime Minister was being properly informed of the true situation. For starters, the Air Ministry’s own statistical information is at odds with what Churchill was told in the Aug 9th reply. As for the statement “The Americans, who carried out a similar investigation in 1948/9, reached a similar conclusion” - even the most boneheaded sceptic has to concede that the hitherto classified documents I have included here tell a vastly different story. The question remains, did the Air Ministry deliberately misinform the Prime Minister? Or was the information he was given merely administrative bungling? Probably the latter. However, as I will elaborate on in future posts, this is only one documented occasion where political figures, military top brass, Congressmen, Lords, etc have been given suspect material. So one does wonder. As for the American’s in this case.. Did Britain’s Air Ministry receive dishonest information from whoever they enquired with in Washington DC on Churchill’s behalf? Or did the Air Ministry receive correct, alarming conclusions, and subsequently misinform the Prime Minister for reasons only they know? Whatever the answers, sceptics and debunkers take note: Do not try and tell patient researchers that the official response to the UFO matter is black-and-white. And, as I have said before, if leaders like Sir Prime Minister Winston Churchill was given the run-around as far back as 1952, civilian researchers nowadays have a rather large task on their hands indeed.