“The equivalent 41 Wing term to an “Uncorrelated Target” is a “Contact Of Interest” (COI), the COI process is documented in the publication “41 Wing Standing Instruction (Operations) 3-19 Contact Of Interest Reporting Process.”  This instruction defines how to report events that are detailed in the “41 Wing Tasking Intentions” as reportable items.”

The Royal Australian Air Force’s (RAAF) 41 Wing is one of four operational wings that are subordinate to the RAAF’s huge Surveillance and Response Group. The primary role of 41 Wing is that of aerospace detection and surveillance above and around Australia’s. The Wing is divided into four units, three of which are operational: 1 Remote Sensor Unit (1RSU), 3 Control and Reporting Unit (3RCU), and 114 Mobile Control and Reporting Unit (114MCRU). These units use some of the most advanced primary radar systems in the world, and are tasked with detecting, tracking, monitoring, identifying and reporting any unusual, unknown or even hostile intrusions into Australia’s airspace. The units, and 41 Wing as a whole, are also tasked with supplying a “recognised air picture” to such areas as the Air Battle Management Coordination Center (ABMCC) and the Australian Theatre Joint Intelligence Center (ASTJIC). I am satisfied, after much study, that if any system, or “system of systems”, is going to detect and track a UFO event above or near Australia, it would be one of the above mentioned units.
Serious researchers of the UFO matter are well aware that such primary radar equipped air defence units, at least overseas, have been detecting startling UFO events for decades, sometimes correlated with visual sightings by pilots, or, better still, correlated on more than one primary radar system at the same time. We have thousands of pages of released government documents to back this claim up, as well a formidable bevy of retired military officers swearing that such events do occur on occasion, and are unexplainable in mundane terms. One organisation I have studied in relation to the UFO matter is the joint American/Canadian North American Aerospace Defence Command (NORAD). NORAD has a long but little known history of tracking bona fide UFO’s – and I don’t mean stray Russian cruise missile test flights or hijacked aircraft with their transponders turned off. We this for a fact because we have a growing pile of NORAD or NORAD-related documents to prove it, all furnished through diligent and tiring Freedom of Information Act (FOIA) requests. More on that in my next post.

Having already asked, in August 2013, the Minister of Defence and the Chief of Air for any and all terms and terminology that would equate to unknown, unusual or unidentified air traffic used by anyone or any area of the Defence Department, and having been grossly misinformed by both of them, I decided to embark on a slightly different approach. On the 11th April I wrote to the Assistant Director of Freedom of Information, Defence Department, Melissa Davidson, explaining what terms and terminology NORAD uses for UFO events, and highlighting actual NORAD documents, to make it quite clear what I was after. My target was the RAAF’s 41 Wing. I was under no illusion that the systems used by the operational units of 41 Wing must use specific terminology to describe unknown or unusual air activity, just as NORAD does. For the record, NORAD uses the term “Uncorrelated Target” as a baseline to describe, at least initially, an air or space event that cannot be accounted for or ignored. To my knowledge, no researchers, surprisingly, in Australia have probed 41 Wing for information like this before. I was the first.

On the 9th of May, 2014, Melissa Davidson wrote back to me stating that the RAAF had seen fit handle my enquiry, and came back with the following:

“The equivalent 41 Wing term to an “Uncorrelated Target” is a “Contact Of Interest” (COI), the COI process is documented in the publication “41 Wing Standing Instruction (Operations) 3-19 Contact Of Interest Reporting Process.”  This instruction defines how to report events that are detailed in the “41 Wing Tasking Intentions” as reportable items. Should a COI meet certain criteria it may be declared an “Unauthorised Aircraft Movement” (UAM). The criteria for this declaration and the processes for further investigating this activity is defined in “41 Wing Standing Instruction (Operations) 3-15 Unauthorised Aircraft Movements Reporting and Investigation Process” The above documents work in conjunction with the “OPTASK LINK Identification Supplement” which is promulgated by the Air and Space Operations Centre and defines how tracks are to be identified by all ADF air surveillance units. There is a standing document which covers operations conducted under peace time ROE and when we conduct exercises and operations under a different ROE an Identification Supplement specific to that exercise/operation is developed for that specific circumstance.”
Finally some truthful explanation of the facts. Here, in plain English, I was being furnished with the titles of four different RAAF publications, as well as terminology no one in the UFO community has seemingly heard before: “Contact Of Interest”. So much for the garbage I had been fed by the Defence Department previously. Without further ado, I immediately demanded, using the FOI Act, the aformentioned documents.

On the 27th of July, 2014 I was supplied all four publications, albeit with very significant redactions. Here, for the first time, I finally believed I was getting on top of how the RAAF may detect and track a significant UFO event just as has occurred all over the world. The publication I want to highlight in this post is, at six pages, titled “41 Wing Standing Instruction (Operations) 3-19 Contact Of Interest Reporting Process”. Imaged below is the first page: 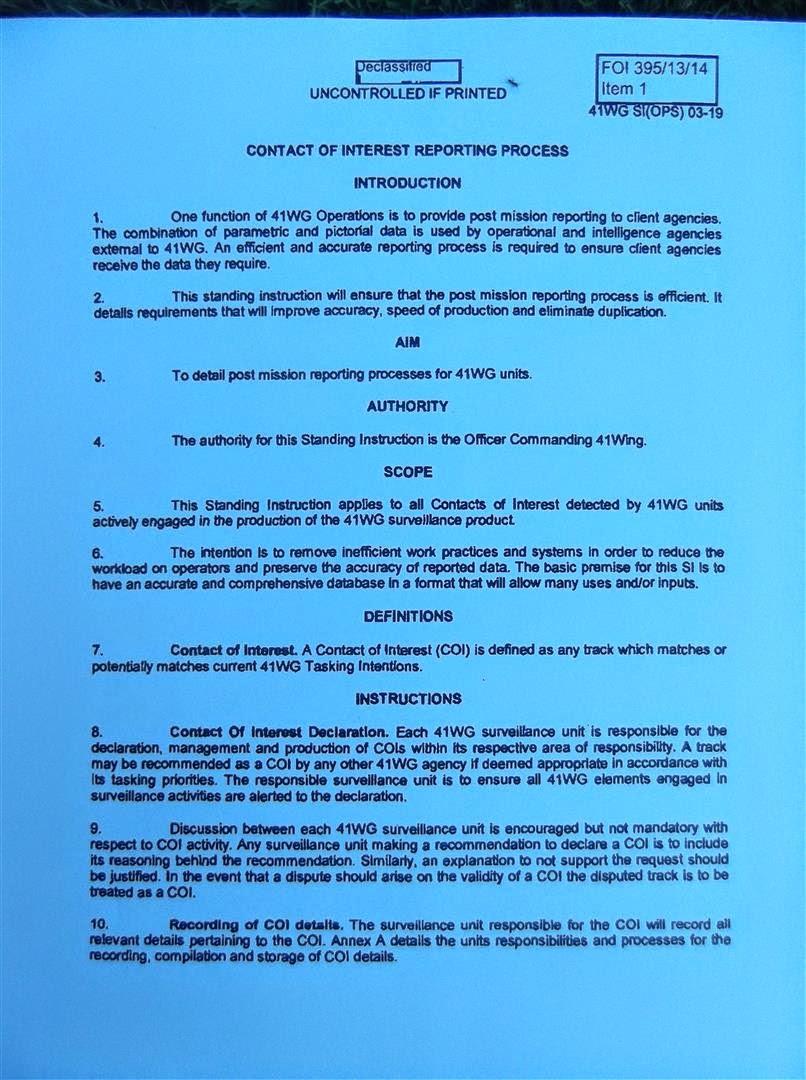 “Contacts of Interest. A Contact of Interest (COI) is defined as any track which matches or potentially matches current 41WG Tasking Intentions.”

Unfortunately, the publication titled “41WG Tasking Intentions”, was nearly totally redacted when I received it. So we don’t know exactly what 41 Wing is looking for in the skies at any one time. But, one could be fairly certain that the units within 41 Wing, who are tasked with monitoring the skies, do indeed search far and wide for potentially hostile combat jets, light aircraft behaving suspiciously, and any unknown or unusual airframes which may pose a threat to Australia. Our air defence capability would be in a sorry state indeed if we weren’t.

“Recording of COI details. The surveillance unit responsible for the COI will record all relevant details pertaining to the COI. Annex A details the units responsibilities and processes for the recording, compilation and storage of COI details.”

This means that the details of any COI’s tracked by 41 Wing units are recorded. I have it on excellent authority that potentially menacing COI’s are dealt with astoundingly quickly, and multiple Defence operations centers throughout the country can instantly patch in to the data stream which would be coming into the units radar systems and synthetic displays. Thus, as one would hope, different areas of Defence can make decisions on how to handle the situation. Of course, of interest to us is Annex A, mentioned above. What, precisely, is recorded for any given Contact of Interest? Below I have imaged one of three pages which are used by 41 Wing units to record basic COI data: 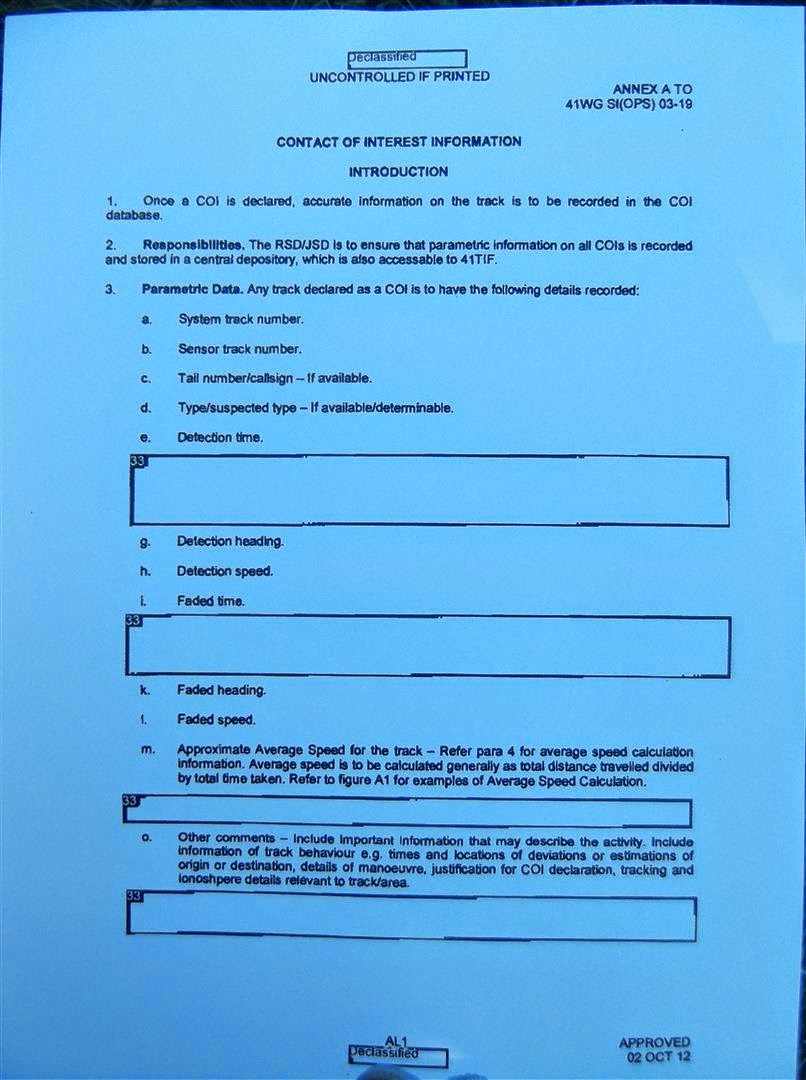 So, here we have it. Despite what the Department of Defence told us, in 1996, in a 3 page Instruction titled “Defence Instructions (General) ADMIN 55-1” publication, ie that UFO events were not of interest to the RAAF any longer, it is quite clear that 41 Wing units are indeed tasked with recording out of the ordinary aerial events. Note Annex A imaged above makes the unamiguaous statements:

“Once a COl is declared, accurate Information on the track is to be recorded in the COI database.”

Also, in relation to the recording and handling of incoming data, note the information which must be generated:

“Parametric Data. Any track declared as a COI is to have the following details recorded:

M.      Approximate Average Speed for the track - Refer para 4 for average speed calculation Information. Average speed is to be calculated generally as total distance travelled divided by total time taken. Refer to figure A 1 for examples of Average Speed Calculation.

O.      Other comments - Include important information that may describe the activity. Include Information of track behaviour e.g. times and locations of deviations or estimations of origin or destination, details of manoeuvre, justification for COl declaration, tracking and ionosphere details relevant to tracks/area”

Four of the points contained in this Annex are redacted under “Section 33” of the FOI Act. Section 33 “exempts documents that affect Australia's national security, defence or international relations”. The points redacted on the above imaged page are obviously F, J, N and P. Now, I am not really sure what these points may contain, but I am using my appeal powers granted to me under the FOI Act to find out.

So what does all this actually mean for UFO researchers? Does 41 Wing actually detect and track UFO events that cannot be whatsoever explained? And if so, who is tasked with the investigation of such events? Indeed, there is not a single piece of information contained here that shows anything untoward. One would have to obtain actual cases where extremely unusual 41 Wing generated radar data has been recorded and handled by higher authorities. I am in the process of doing this right now. What these documents do show us is that the RAAF still take seriously unknown tracks, just as they did in the past. The RAAF indeed used to investigate unusual radar tracks under the UFO banner, though they termed them Unusual Aerial Sightings (UAS). As stated above, “Defence Instructions (General) ADMIN 55-1” told the public and the press in 1996 that UFO events – either civilian or military – were not of scientific interest to the RAAF any longer. They essentially “got out” of the whole matter. Yet here we see that they are still recording and handling exactly the same events as they did before.
Posted by Paul Dean at 01:59