Huge Release Of  Information From The Australian Transport Safety Bureau


On the 1 December 2014, I submitted a Freedom of Information (FOI) request to the Australian Transport Safety Bureau’s (ATSB) FOI branch stating:

“I wish to have searched your Aviation Accident or Incident Notifications database(s) for any reported incidences or events which contain any of the following attributes: Unusual or Unidentifiable Aircraft and/or Objects; ie UFO's;  Suspected (but not confirmed) Drones/Unmanned Aerial Vehicles.  As stated, I would like the searches performed on files/databases dating back to May, 2003.

The next day, the ATSB sent me their mandatory acknowledgement of receipt of my request, and thus I waited for some four weeks for some progress.

On the 24th of December, 2014, the ATSB’s FOI branch sent me an initial decision stating they had indeed found material in their Aviation Accident or Incident Notifications database(s) which was responsive to my request. Also, the ATSB had furnished me, in the same correspondence, an “estimate of charges”:

“In accordance with arrangements made by Martin Dolan, Chief Commissioner of ATSB, I am authorised to make a decision under section 29 of the FOI Act. Accordingly, I have decided that you are liable to pay a charge for the processing of your request. The preliminary estimate for processing this request is $2010.63.”

$2010.63?? For material they already have accessible at the touch of a button?? Well, I was having none of it. On the 5th of January I sent the ATSB a request for a waiving of charges, backed up by my assertion that $2010.63 seemed a rather high figure – indeed far higher than any other FOI request I have submitted to other agencies and departments; plus, the little fact that UFO’s, unknown or unusual craft, drones, etc were a huge safety issue, sometimes in the extreme, and that the public would be better served knowing a bit more about what seems to be flying around in our airspace. The very next day I received a surprising and much appreciated response from the ATSB:

“Thank you for your email of 5 January 2015.  The ATSB has decided to waive the charges applicable for processing your request.”

On the 19th of March, 2015, after nearly three months of waiting, I received three PDF files containing a formidable 158 pages of ATSB Aviation Accident or Incident Notification reports, plus other internal ATSB correspondence, as well as inter-agency correspondence between the ATSB and the Royal Australian Air Force (RAAF). Upon studying this material, I was able to ascertain that there were, dated back to 2004, twenty-four individual air safety incidences involving near misses, or “air proximity” events, between aircraft and unknown, or at least, hard to identify bodies in Australian skies. Five of these events were already known to us from previous FOIs to Air Services Australia (ASA) and general information publically available, usually from online ATSB systems.

Of these twenty-four events most are clearly explainable as sightings of coloured balloons, pesky Unmanned Aerial Vehicles (UAV), remote controlled model aircraft, etc. But, just as I had hoped, there are three cases that jumped out at me, and a few others which seem borderline. Researcher Keith Basterfield went through the data too, and he agreed that the same three events I picked were worth looking into. I aim to detail these unusual cases, with actual images of the paperwork, starting off with the most concerning event, and, in some ways, the most perplexing.

The raw data states that at 0956hrs local time (EST) on 26 April 2005, an airprox event occurred near Mount Sandon, New South Wales, at latitude 31deg 19mins south, and longitude 151deg 24mins east. The aircraft involved was a Beech aircraft B200C turboprop belonging to the Royal Flying Doctor Service of Australia, which had left the ground and was cruising at an altitude of about 20,000 feet. Its SSR code was A1055. The ATSB narrative of the event reads as follows:

“4NM north of Mount Sandon the pilot of [redacted] thought they saw traffic just below them coming towards them. They commenced a turn to the right to avoid the object then turned back to the left to see behind and attempt to identify what it was. The pilot subsequently reported that it was a red and white object travelling very fast but it could not be identified for certain as an aircraft. There was no other known traffic to the ATS system within 12NM of the aircraft and there was no cloud. The sun at the time was high and to the rear left of the direction of travel. Air situation playback (ASPB) confirmed there were no other Mode-C SSR returns. The area is outside of primary radar coverage. The object passed at an estimated distance of less than 500 feet below the aircraft.”

20,000 feet hey? What, I ask, other than another airplane, does a pilot need to turn to avoid? A missile or UAV? We are currently, and somewhat urgently, looking into what sort of body could achieve this sort of altitude; and some of you may remember the fiasco that has occurred over Perth in recent times involving potential rocket firings near passenger planes. If not, read my previous blogs:

Below is an image of some of the actual ATSB material: 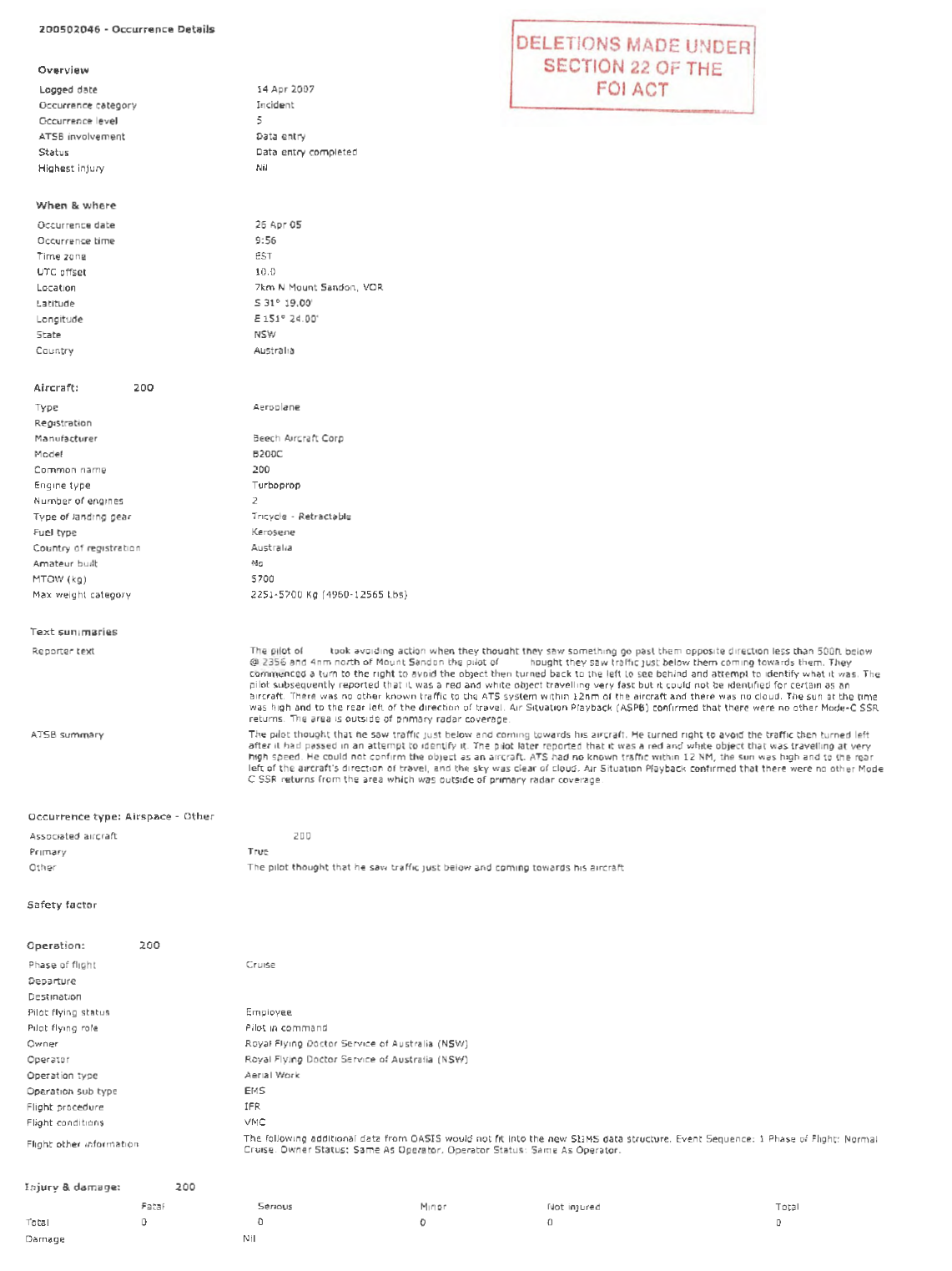 “Please note that this occurrence is a notification only and has not yet been investigated. After being issued departure instructions and a take-off clearance [redacted] take-off clearance was cancelled due to multiple unidentified system tracks that appeared on the Australian Defence Air Traffic System (ADATS) Situational Data Displays (SDD). The tracks presented as primary radar returns only, with no associated secondary surveillance radar (SSR) data. These tracks appeared at approximately 30NM south of WLM and disappeared from all SDD screens at approximately 8NM south of WLM. No further returns were observed and [redacted] was subsequently departed without further incident.”

Now, I wish to stress that this event could be related to primary radar glitches involving interference and such, but, as the paperwork tells us, an Air Safety Occurrence Report (ASOR) was raised because of the event. ASOR’s are a RAAF report, so someone considered the event serious enough to not ignore it. Maybe soon we will find out. I have already sent an FOI Request to the Department of Defence in which I described the event and its pertinent data, and I finished by stating:

“I wish to ask for any material held by the Department of Defence, regarding the above matter. The material may well be held at the Directorate of Defence Aviation and Air Force Safety (DDAAFS) and/or at Williamtown RAAF. Specifically, I wish to obtain ASOR material; any internal Defence emails, or emails to and/or from external agencies (the ATSB for example); any investigative reports; any material held on the Defence Aviation Hazard Reporting and Tracking System (DAHRTS); any material held on the Closed Loop Hazard/ASOR Review and Tracking System; imagery from the actual Situational Data Displays (SSD); primary radar system test results; general opinions and conclusions of RAAF officers; logs of phone calls made regarding the incident; etc.”

Below is an image of the paperwork for this puzzling event: 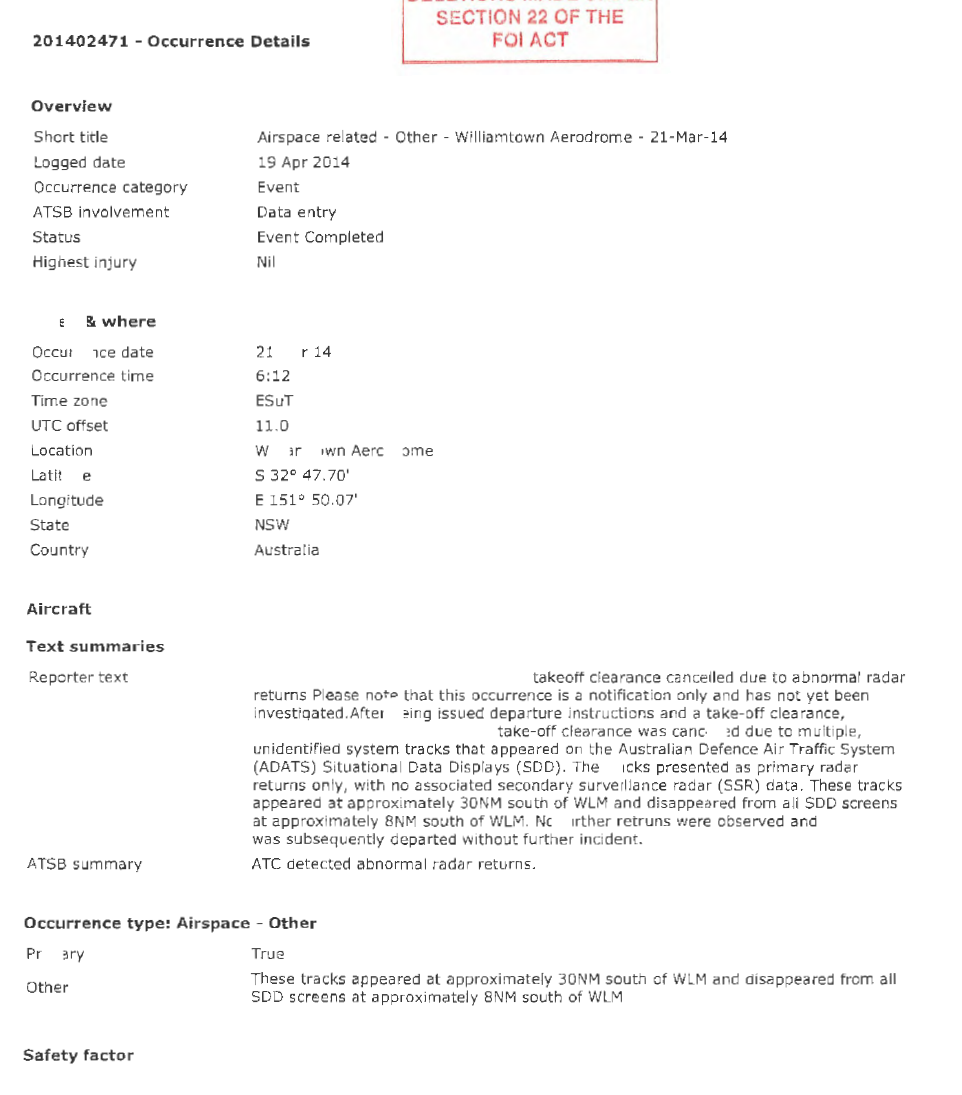 A large (approx. double size of a soccer ball) cylindrical shiny object passed by aircraft by our right hand side. Its colour was brown/orange. It caught my eye in the 1230 position and I watched it pass by our right hand side at our level and missed our right hand wing tip by about 5 metres. Reported to ATC (Sydney approach). It happened very quickly and I was the only known witness. It might have been a balloon but it was not round.”

An image of the ATSB documentation is below: 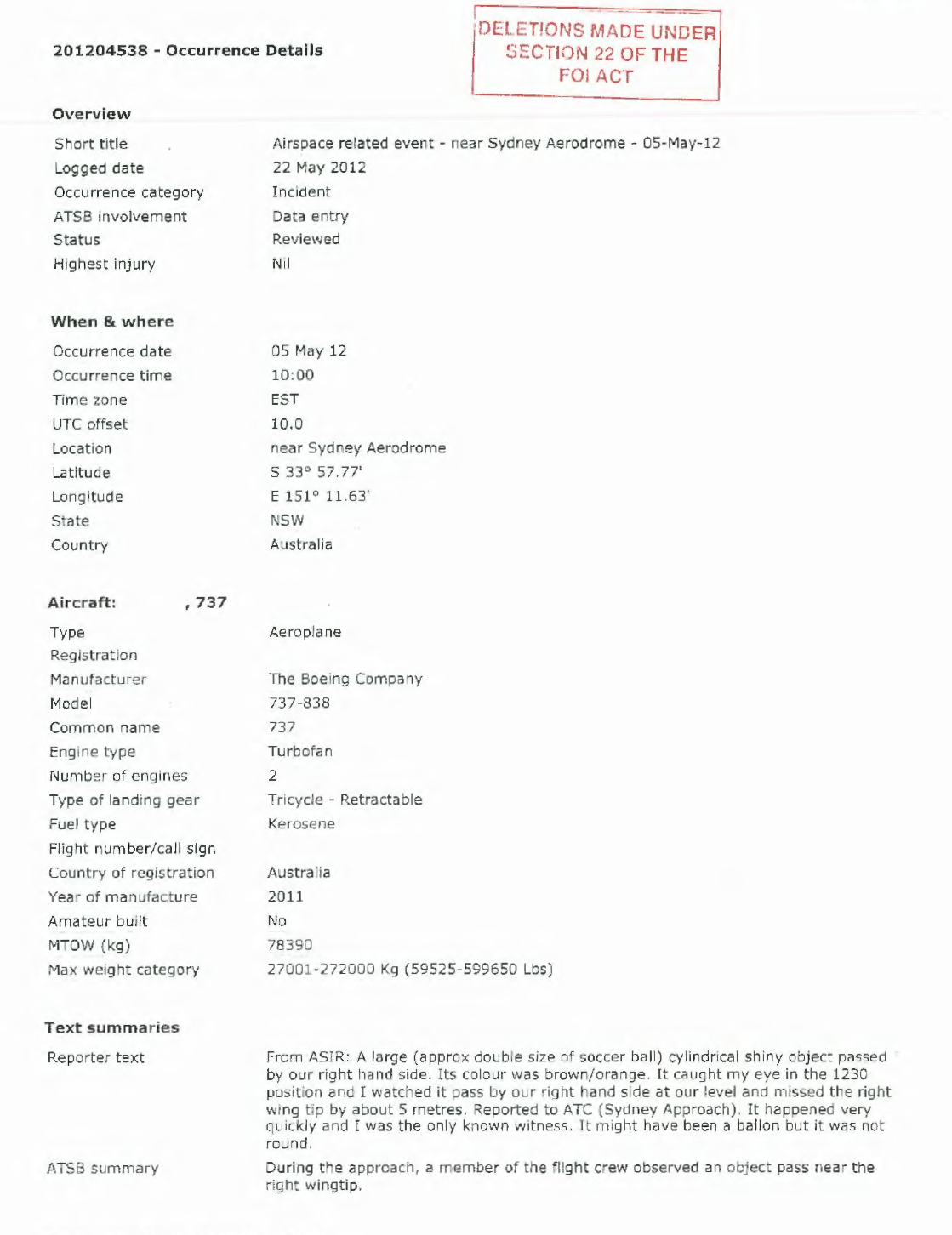 So, to sum up, it is quite clear that pilots are still reporting serious UFO events – whatever they may be – to civil aviation authorities. The ATSB and ASA obviously get the lions share of such reports through various reporting channels such as the Aviation Accident or Incident Notification report system. One wonders how many pilot reports have been filed, or are held, with other systems like the Department of Defence ASOR system, or their Defence Aviation Hazard Reporting and Tracking System (DAHRTS), or their Closed Loop Hazard/ASOR Review and Tracking System. One wonders about foreign civilian pilots who report events to agencies in their home nations even when such events occur over Australia. One wonders, also, how many UFO-style events go unreported altogether.
Posted by Paul Dean at 02:41 6 comments: