This blogpost is the third in a series which aims to link, through official and documented record, the UFO matter with the huge North American Aerospace Defence Command (NORAD). For over 50 years, NORAD’s stance on so-called “UFOs” – and I don’t mean merely stray aircraft – is that they know nothing, see nothing and hold nothing on record. However, myriad US military documents prove that NORAD has not been entirely honest. In this post I will highlight two especially unusual occasions where they were certainly involved. But, beforehand, if my readers need to catch up, I have linked is Part 1 and Part 2.


UFOs Are Tracked On NORAD Systems: And That’s Fact

Now down to business. A little known fact concerning the infamous Japan Airlines sighting in 1986 is that NORAD almost definitely played a role in the extraordinary event, completely aside from the FAA and even the USAF. For those that do not know about this case, I will only briefly summarise it. On November 17th, 1986, Japan Airlines (JAL) cargo flight 1628 was flying at nearly 900 kilometres an hour over Alaska. Just after sunset, the three crew witnessed a series of UFO encounters that last for 31 minutes, and, the entire fiasco was watched on both FAA primary radar, and, USAF primary radar. The case made headlines around the world. In 2000, John Callahan, Chief of the FAA’s Accidents, Evaluations and Investigations division confirmed the seriousness of the event, and the involvement of the Central Intelligence Agency and the President’s Scientific Staff. He also came forward with more FAA evidence, on top of the hundreds of pages of official documentation already released.

NORAD’s involvement has been overlooked in this case, I believe. At the heart of the matter, we know for an absolute fact that both the primary radar at the FAA’s Anchorage Air Route Traffic Control Center (AARTCC), and the primary radar at the USAF’s Elmendorf Air Force Base Regional Operations Command Center (ROCC) picked up “surge primary returns” next to the JAL flight. As these returns were being watched on the screens, the crew were discussing with the FAA, over radio, the worrisome traffic they had around them. It’s a classic radar-visual case, pure and simply. The actual voice tapes of this event are available, and one can actually hear the gravity of the situation in the voices of the pilot, as well as those of the air traffic controllers at FAA AARTCC and USAF ROCC. The important thing here is that there may have been, in some no-doubt complex way, a third set of air traffic controllers, using a third system, watching the event. In the official FAA voice tape transcript, the USAF’s ROCC controller says, at 5:38:51:

“Ah, I’m gonna talk to my other radar man here has gotta, he’s got some other equipment watching this aircraft.”

“Ya, this is one dash two again. On some other equipment here we have confirmed there is a flight size of two around. One primary return only.”

Note the first statements, “…my other radar man here…” and “…some other equipment…”, and then the subsequent statement “…some other equipment here we have confirmed…”. Considering it is a USAF controller who was talking, one can’t help but question who “my other radar man” could be, and, what “other equipment” was “watching” the UFOs around the JAL flight? It turns out it was probably NORAD. Elmendorf Air Force Base had, in the 1980’s, a more classified system operated by NORAD, which complemented the USAF hardware. The two merged in Year 2000, but, back in 1986, NORAD’s presence wasn’t exactly advertised at the time of the JAL 1628 UFO sightings. In fact, when one reads that dismal FAA paperwork on the incident, even the USAF’s involvement, let alone NORAD’s, was barely mentioned, despite the fact that they were watching the same thing on their screens, and stating such to the FAA controllers and the JAL pilots.

Whatever the exact situation, speculation that NORAD was involved in this event is strengthened when one reads a particular FAA document from the FAA’s JAL 1628 report. After one of the post-landing interviews between the JAL crew and FAA Special Agents James Derry and Ronald Mickle, Special Agent Derry wrote a one page statement. The final paragraph states:

“Upon completion of my discussion with the crew, I called Captain Stevens (Duty Officer to NORAD) and asked if he had any questions other than what I had asked. He said he had no other questions, but they also showed two targets on radar (one was JAL). He stated that they would give all data to Intelligence in the morning. I then asked Bobby Lamkin by phone if the Air Force was holding the data and he said yes”

Below is an image of this document. 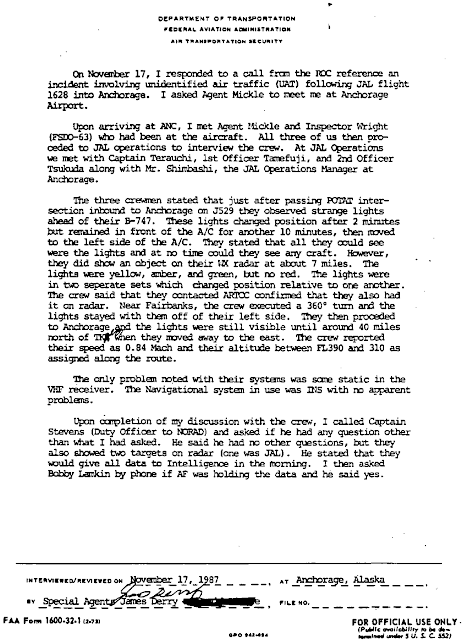 Another incident where NORAD paperwork connects them, very strongly I might add, to serious UFO events, is the extraordinary October-November, 1975 “over flights” of a dozen US military bases by unknown aircraft, variously described as mundane helicopters right through to totally unfamiliar and oddly performing craft that appeared repeatedly on ground-based radar and utterly eluded USAF authorities for weeks. These events were highlighted in Barry Greenwood and Lawrence Fawcett’s game-changing 1984 book “Clear Intent”, later published with the title “UFO Cover Up: What the Government Won’t Say”. I will not even attempt here to give an overview of the wave of UFO activity that occurred at that time. What does need to be said though is that hundreds and hundreds of pages of official documents were released from nearly two dozen commands and agencies within the US military throughout 1976 to 1983. Barry Greenwood and Robert Todd accessed most of them, and Barry fondly tells me how stunned he was – time after time – that such raw intelligence and front-line reporting was being furnished to him. These researchers cannot be thanked enough for their work.

Amongst those piles of gold, was a four page release of “incident” summaries extracted from both the NORAD Command Directors Log and the 24th NORAD Region Senior Director’s Log. The time period for released material was from the 29th of October to the 10th of November, 1975. The actual documents were released to researcher Todd Zechel on the 4th of October, 1977. Despite the fact these are quite well known, I wish to highlight some of the contents, and provide imagery of the offending pages. The first page details various worrisome intrusions by “unknown helicopters” over Loring Air Force Base, Maine, Wurtsmith Air Force Base, Michigan, and Malmstrom Air Force Base, Montana – all of which maintained mission-ready nuclear weapons. See below. 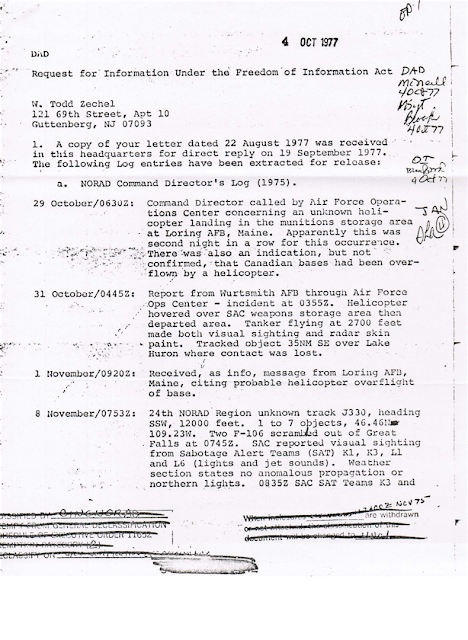 The stakes are raised on page 2 of the release where the 24th NORAD Region Senior Director's Log (Malmstrom AFB, Montana) The most alarming incident summaries are probably:

“7 Nov 75 (1035Z) - Received a call from the 341st Strategic Air Command Post (SAC CP), saying that the following missile locationsreported seeing a large red to orange to yellow object:  M-1, L-3, LIMA and L-6.  The general object location would be 10 miles south of Moore, Montana, and 20 miles east of Buffalo, Montana.  Commander and Deputy for Operations (DO) informed.”

And, for the actual word “UFO”, 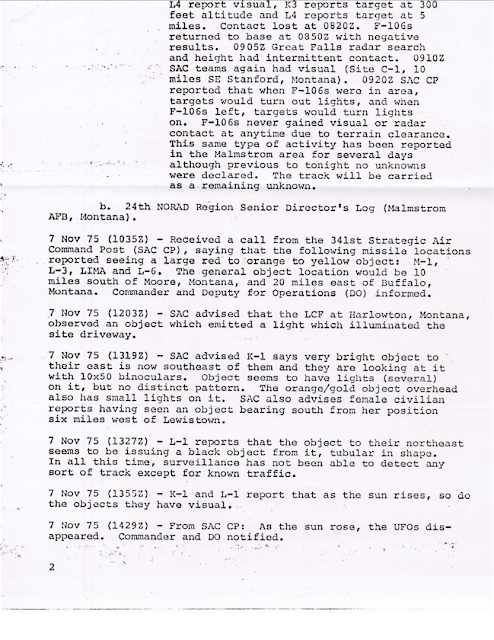 On page 3, the continuing NORAD summaries mention the term “UFO” five times, plus radar tracks of “unknowns”, “objects”, plus the inspection of such events by fighter jets, which met with failure. The page is imaged below. 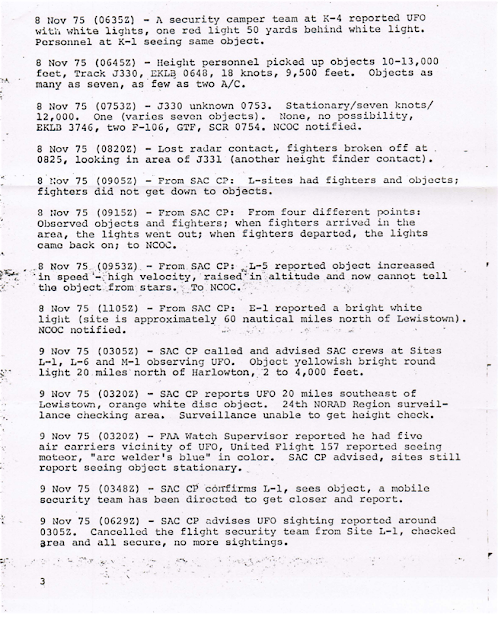 The final page summarises a continuation of similar events that kept plaguing nuclear-weapon equipped bases along the US-Canadian untill mid-November. One piece of text, which brought Minot Air Force Base into the spectacle states: 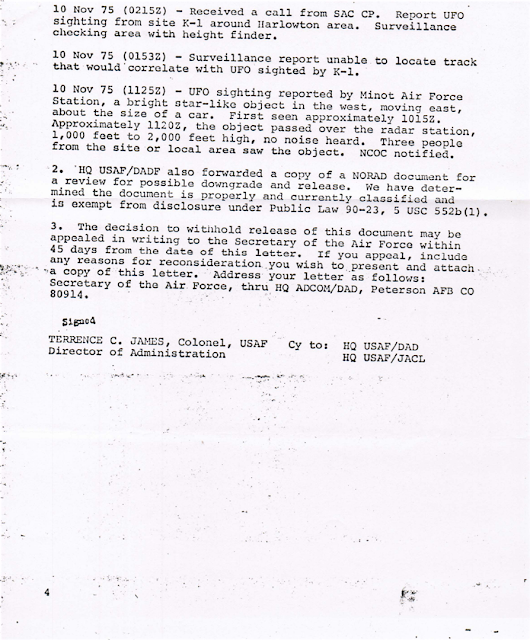 Finally, this 4 page NORAD release was finalised with some interesting statements which alluded to more material that related to the over flights of these bases, and, thus, Todd Zechel's FOI request. The text indicates that more documents of NORAD providence are in existence, but that they are not fit for release to the public due to legal exemptions. Specifically:

“2.  HQ USAF/DADF also forwarded a copy of NORAD document for a review for possible downgrade and release.  We have determined the document if properly and currently classified and is exempt from disclosure under Public Law 90-23, 5 USC 552b(1).”

These pages were signed off by one Colonel Terrance C. James, USAF, Director of Administration. The USAF and NORAD run administrative and functional operations hand-in-hand, thus, a USAF Colonel was able to clear this material for release. Also, aside from the above releases, there were actually a great deal more documents of NORAD providence, or, that mentioned NORAD, released to the likes of Barry Greenwood, Robert Todd, Lawrence Fawcett, Todd Zechel and others in that extraordinary period of FOI openness. In one, which Barry Greenwood has on file, the Commander-in-Chief of NORAD sent a four-part message to various NORAD units on November 11, 1975 summarizing the events. The introduction stated:

Regardless of who released what, clearly any NORAD Log Extracts that contain the phraseology like  “UFOs”, radar tracks of low-flying “unknowns”, “objects” and “unknown helicopters” indeed fall within our area of interest. NORAD, as well as other US military branches, stated that these incidents were “isolated”, but even the most bone-headed skeptic would not accept that. In Part 4 of this series I will be further discuss NORAD's capabilities and mission.