This is Part 5 of an ongoing series regarding the North American Aerospace Defence Command (NORAD) and their involvement UFO phenomenon. I have already detailed over a dozen pages of declassified military documents that show us that tangible UFO events have come to the attention of NORAD. The first four posts in my series can be found Part 1, Part 2, Part 3 and Part 4.

Dealing With NORAD: An Introduction

Dealing with NORAD is not easy. Normally, one would request information under the Freedom of Information Act (FOIA) from an American government agency, or under the Access to Information Act (ATIA) from a Canadian government agency. However, NORAD is a “bi-national” organisation, and the governments involved decided to “exempt” it from either FOIA or ATIA in 1982. However, the US’s Northern Command (NORTHCOM), who partly controls NORAD, can process FOI requests for NORAD records – but everything is on NORAD’s terms. The actual response one gets from the NORTHCOM FOIA and Privacy Act Requester Service Center at Peterson Air Force Base for NORAD records is, except in exceedingly rare cases:

“NORAD as a bi-national organization is not subject to FOIA. No search of records will be conducted.”

With a statement like that, what hope does anyone have of obtaining NORAD records (be they radar data analysis reports, position statements, operational reports, etc) regarding UFO activity? In due course, I will explore this at much greater length. Despite this information vacuum, a number of NORAD records have been released during the last few decades. In this post I will focus on airspace management and so-called “air breathing” events. In the next post I will focus on space-based issues. Also, much of the following findings, unlike my previous NORAD-related posts, have only been possible due to the ceaseless efforts of British research, colleague and friend David Charmichael. Together we have managed to discover more about NORAD and the UFO matter than has been discovered for some time.

Currently, NORAD, at least in regard to airspace management, is divided in eight areas known as “J Directorates”. “J2” and “J3” are of most importance to us. J2 is the Directorate of Intelligence, and J3 is the Directorate of Operations. Furthermore, within J3 there are a number of divisions. We have ascertained that the “Aerospace Operations Division” is responsible for the unknown tracks, and, thus, the UFO matter. This division is known as number “3”. So, when written in official documentation, the whole abbreviation is “J33” or sometimes “J3(3)”. On top of that, there is further breakdown of the J33 area, but the details seem to be classified. We have, however, managed to find out that there is a sub-division of J33 called “Airspace Management” which could be of importance. It is known as the “C” sub-division of J33, written as J33C. We also know of other areas of NORAD that appear to be significant to the UFO matter, as we shall soon see.

As for official NORAD documentation, two tantalising Instructions I have on file are “NI 10-5 (OPERATIONS) IDENTIFICATION OF AIR TRAFFIC”, dated 31st January, 1996, and “NI10-19  (OPERATIONS) AEROSPACE REPORTING SYSTEM”, dated 12 April 1996. Both Instructions are promulgated “BY ORDER OF CINCNORAD” – The Commander-in-Chief of NORAD. The introduction section of “NI 10-5 (OPERATIONS) IDENTIFICATION OF AIR TRAFFIC” states:

“This instruction describes how to identify airborne objects, to include aerial drug trafficking, with the North American Aerospace Defense Command (NORAD) system.”

Below is the first page of  “NI 10-5 (OPERATIONS) IDENTIFICATION OF AIR TRAFFIC”. It may be worth noting that David Charmicahel and I feel that this publication could still be classified, or, was re-classified after a careless release. I have chosen to publish anyway. 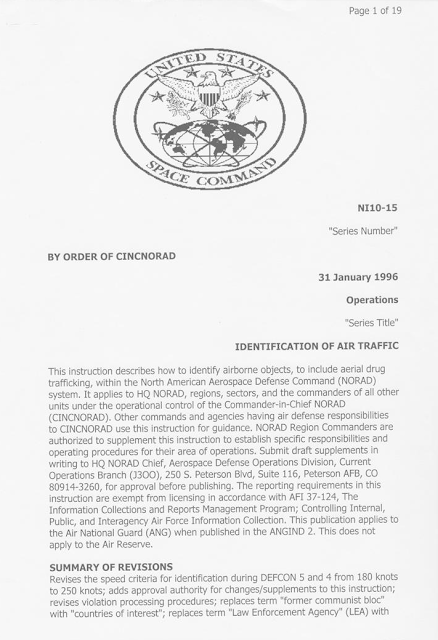 The following pages continue in sectioned point form, and reveal that NORAD – at least in the late 1990’s and into the 2000’s – categorised tracks as either “Friendly” or “Non-Friendly”. These categories are further subdivided into the classifications, “Unknown”, “Interceptor”, “AWACS”, “Special”, “Hostile” or “Faker”. Finally, a track that is awaiting classification is designated “Pending”. Tracks that remain “Unknown” – despite all attempts to identify them – are designated “NORAD Remaining Unknown”, or “NRU”. These events are – or were in the past – rapidly entered on a form known as “NORAD Form 61: Unknown Track Report”. One wonders how many of these “unknowns” have been bona-fide UFO’s. All “Unknown” and “NRU” events have always been classified SECRET. Also, some of the raw data used to be kept in a special NORAD database titled “NORAD Unknown Track Reporting System” and abbreviated to “NUTR”. Discovered by researchers Robert Todd and Barry Greenwood in 1989, NORAD released a general description page of this system after persistent enquiries and FOI requests. The database contained details of seven thousand unknown tracks compiled between 1971 and 1990. Below is an image of the database descriptor page begrudgingly released in 1990. 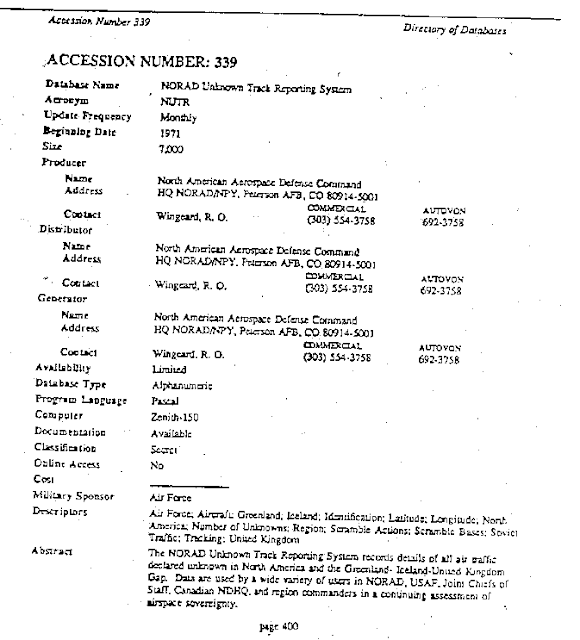 Upon discovering this database, Robert Todd immediately asked NORAD for a release of the contents of the database and was furnished with a series of almost entirely redacted database print outs. The columns were labelled as “HOW ID”, “Sum of Count of TRK #” and “Sum of Sum of # OBJ”. Also, a breakdown for, presumably, “Remaining Unknowns” is visible. But that’s it. The rest of the details – method of detection and verification, altitude and speed of object(s), place of last detection, etc – was blacked out. I am currently asking NORAD to release this old information, and I will discuss that in a later blog post. Below is an example of the database print out of unknown tracks and remaining unknowns. In this page, a total of 95 unknown tracks is listed, with 98 objects detected. This page seems to be results from a single NORAD Region. The time period is perhaps 6 months or 12 months of events, but we never found out, and NORAD weren’t offering to tell us. 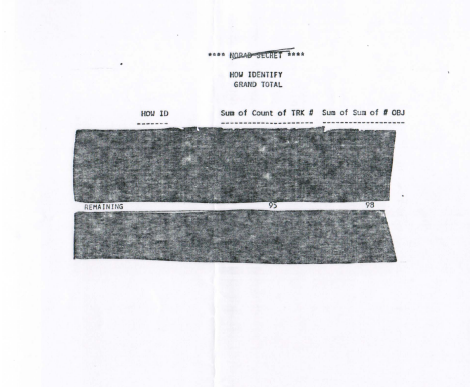 Do NORAD actual study these events further? After years of speculation it turns out that NORAD do indeed investigate these occurrences further, despite having indicated otherwise – and now we have it in black-and-white.

“The ADOC sends a copy of these reports to the Centre for Aerospace Analysis (N/SPANA).”

The Centre for Aerospace Analysis? N/SPANA? We know very little about this organisation, expect that it appears to have been a “joint” area between both NORAD and the old United States Space Command (SPACECOM). In fact, “N/S” (in the organisational code “N/SPANA”) almost certainly stands for “NORAD/SPACECOM”. SPACECOM was absorbed into the US Strategic Command (STRATCOM) in 2002. Interestingly, in 1995, British researcher Armen Victorian received a reply to one of his enquiries to NORAD which stated:

“The Aerospace Analysis Directorate of US Space Command does perform analysis on NORAD Unknown Track Reports... ….they perform their analysis under the auspices of their NORAD role, utilising a dedicated NORAD data base.”

What does any of this matter? It matters because it proves both NORAD and SPACECOM were jointly handling unknown track data above-and-beyond initial detection and plotting. We only have the 1996 version of NI 10-5 (OPERATIONS) IDENTIFICATION OF AIR TRAFFIC so much of this information is twenty years old, but it is a lot more than we knew before. Vague rumours have abounded for decades that NORAD investigated the UFO issue, but now we have something concrete. Obtaining a current copy of this publication has met with difficulty – and that’s putting it mildly. Either way, it would be very surprising if NORAD were not still passing significant unknown track information – UFO data in its purest form – to technical specialists in dedicated cells.

Aerospace Reporting and The Elusive “Form 61”

Another NORAD Instruction which directly relates to the UFO matter is “NI10-19 (OPERATIONS) AEROSPACE REPORTING SYSTEM”. It states:

“6.1. Purpose. Track reporting provides significant air activity information to the NMCC and CINCNORAD through the NORAD Air Defense Operations Center (ADOC). The information is essential for the proper execution of NORAD's mission of warning and attack assessment, air sovereignty and air defense.”

“….Information on all Unknown tracks must be immediately electronically forward told. The completed Form 61 will be forwarded NLT 1 hour after final action is completed unless otherwise directed by the ADOC. Information on any track, regardless of classification, perceived to be a threat (e.g. foreign military combat aircraft) or of national interest will immediately be electronically and voice forwarded to the ADOC.”

And, just to be sure:

Finally, at the end of Chapter 6, “Track Reporting”, it states:

This, of course, refers to the old Center for Aerospace Analysis which I have discussed.

So, at least some years ago, this “Form 61” – or, full title, “NORAD Form 61: Unknown Track Report” – is an item of the utmost importance. Containing real-time, accurate data on “unknowns”, and studied further by whatever “N/SPANA” became, or possibly a sub-division of the current J33 area of NORAD, these sets of data could be brimming with real UFO cases that need, in my view, to see the light of day. Apparently, however, Form 61’s are kept for only five years. Below is an image of a 1977 Form 61. Obtaining a more recent version has met with difficulty. 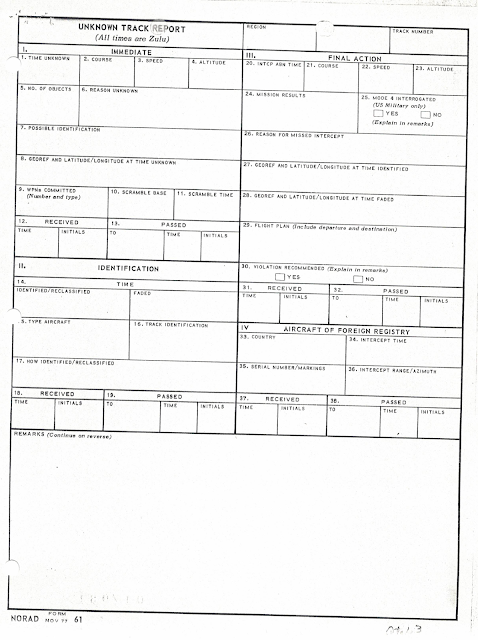 Now that I have dealt with NORAD’s atmospheric detections and study of unknowns, I will move on to space-based events in Part 6 of this series, and beyond. After that, I will continue to highlight what how NORAD play the game now – in 2015 – with myself and David Charmichael. Much effort has gone into this work, and, like so much in the UFO topic, more questions are raised than there are enough answers for.
Posted by Paul Dean at 14:39