Found Or Forgotten? An Impressive UFO Case File From The CIA, And A Little Help From A New Friend


Note: This post has been amended, and can be found here:

America’s Central Intelligence Agency (CIA) has a long history of involvement in the UFO matter. By the 1970’s researchers already knew that they had a large body of internal records, including raw intelligence information reports, discussion papers, foreign press items, etc. In 1978 UFO research group Ground Saucer Watch (GSW) successfully forced the CIA to release some 900 pages of UFO records after lengthy Freedom of Information Act (FOIA) requests. But was this all the CIA had? Researcher Brad Sparks ascertained that 200 more documents were directly referenced in those 900 pages, but suspiciously not included in the 1978 release. More documents of CIA origin have been released since 1978, but their contents are usually of low level significance. Of late, I have been spending some time using the CIA’s electronic search engine known as “CIA Records Search Tool”, or “CREST” and recently I discovered a hitherto classified and unseen CIA record related to the infamous and still unsolved 1975 “over flights” which intruded on myriad nuclear-armed bases across the USA. That work can be viewed here:

But how many more records does the CIA have yet unreleased? And how many more are released but as yet unseen by researchers? I may have found another example of one such record – and a very early example at that –  which means that unnoticed CIA records are not so rare after all. What is rare, however, is getting any enthusiastic and competent help with projects like this, especially when that help comes from a Scottish girl who – if you can believe this – is just 17 years old. Glasgow based UFO researcher Lara Elliott, who has already aided Fran Ridge’s exemplary NICAP case chronology listings, studies the “core” UFO phenomenon, and thankfully hasn’t been sucked into the puerile theater of UFO “entertainment”.

But I digress. The newly found CIA record seems to be a copy of information supplied to them by US Air Force Intelligence. Loren E. Gross has highlighted the case in Volume 7 of his outstanding “UFOs: A HISTORY” series. I haven’t seen the Air Force material, but the CIA record I found is a 4th August, 1950 case report from the Atlantic Ocean. The first page is headed “CENTRAL INTELIGENCE AGENCY” with “INFORMATION REPORT” underneath. The subject is “Unidentified Airborne Object”. “At Sea – North Atlantic” is the location. Interestingly, a huge area of text at the top of this first page is blacked out, or, redacted. Next to that sea of ink is the familiar phrase “THIS IS UNEVALUATED INFORMATION”. Listed next to the word “SOURCE” is “Officers…”, then the names and other details are blacked out. Finally, “…..who reported the following observations at 10:00 am EDT on 4 Aug 50 at 39° 35’ North, 72° 24 ½ West”. Below is an image of this page, with a transcript typed out underneath for clarity. 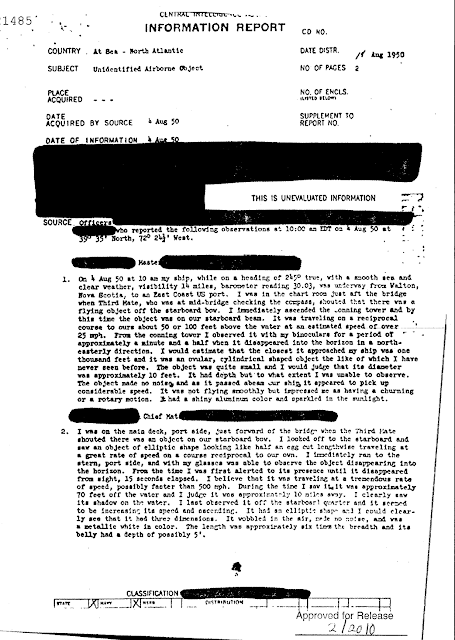 1.On 4 Aug 50 at 10 am my ship, while on a heading of 2450 true, with a smooth sea and clear weather, visibility 14 miles, barometer reading 30.03, was underway from Walton, Nova Scotia, to an East Coast US port. I was in the chart room just aft the bridge when Third Mate, who was at mid-bridge checking the compass, shouted that there was a  flying object off the starboard bow. I immediately ascended the conning tower and by this time the object was on our starboard beam. It was travelling on a reciprocal course to ours about 50 or 100 feet above the water at an estimated speed of over 25 mph. From the conning tower i observed it with my binoculars for a period of approximately a minute and a half when it disappeared into the horizon in a north-easterly direction. I would estimate that the closest it approached my ship was one thousand feet and it was an ovular cylindrical shaped object the like of which i have never seen before. The object was quite small and I would judge that its diameter was approximately 10 feet. It had a depth but to what extent I was unable to observe. The object made no noise and as it passed abeam our ship it appeared to pick up considerable speed. It was not flying smoothly but impressed me as having a churning or rotary motion. It had a shiny aluminium colour and sparkled in the sunlight.

2. I was on the main deck, port side, just forward of the bridge when the Third Mate shouted there was an object on our starboard bow. I looked off to the starboard and saw an object elliptic shape looking like half an egg cut lengthwise travelling at a great rate of speed on a course reciprocal to our own. I immediately ran out to the stern, port side, and with my glasses was able to observe the object disappearing into the horizon. From the time I was first alerted to its presence until it disappeared for site, 15 seconds elapsed. I believe that it was travelling at a tremendous rate of speed, probably faster than 500 mph. During the time I saw it, it was approximately 70 feet off the water and i judge it was approximately 10 miles away. I clearly saw its shadow on the water. I last observed it off the starboard quarter and it seemed to be increasing its speed and ascending. It had an elliptic shape and I could clearly see that it had three dimensions. It wobbled in the air, made no noise, and was a metallic white in colour. The length was approximately six times the breadth and its belly had a depth of possibly 5’.

How interesting. The second page of this case report is imaged below. 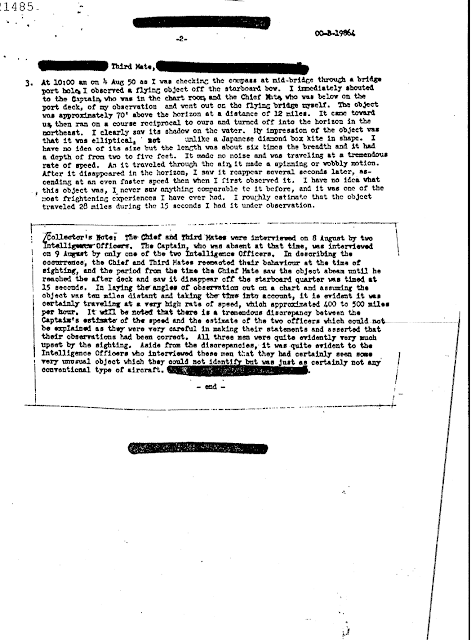 Again, For clarity, the above page reads:

3. At 10:00 am on 4 Aug 50 as I was checking the compass at mid-bridge through a bridge port hole, I observed a flying object off the starboard bow. I immediately shouted to the Captain, who was in the chart room, and the Chief Mate, who was below on the port deck, of my observation and went out onto the flying bridge myself. The object was approximately 70’ above the horizon at a distance of 12 miles. It came toward us, then ran on a course reciprocal to our and turned off into the horizon in the northeast. I clearly saw its shadow on the water. Its impression of the object was that it was elliptical, not unlike a Japanese diamond box kite in shape. I have no idea of its size but length was ix times the breadth and it had a depth of from two to five feet. It made no noise and was travelling at a tremendous rate of speed. As it traveled through the air it made a spinning or wobbly motion. After it disappeared in the horizon, I saw it reappeared several seconds later, ascending at even faster speed than when I first observed it. I have no idea what this object was, I never saw anything comparable to it before, and it was one of the most frightening experiences I have ever had. I roughly estimate that the object travelled 28 miles during the 15 seconds I had it under observation.

Collector’s Note: The Chief and Third Mates were interviewed on 8 August by two Intelligence Officers. The Captain who was absent at that time, was interviewed on 9 August by only one of the two Intelligence Officers. In describing the occurrences, the Chief and Third Mate reenacted their behaviour at the time of sighting, and the period from the time the Chief Mate saw the object abeam until he reached the after deck and saw it disappear off the starboard quarter was timed at 15 seconds. In laying the angles of observation out on a chart and assuming the object was ten miles distant and taking the time into account, it is evident it was certainly travelling at a very high rate of speed, which approximated 400 to 500 miles per hour. It will be noted that there is a tremendous discrepancy between the Captains estimate of speed and the estimate of the two officers which could not be explained as they were very careful in making their statements and asserted that their observations had been correct. All three men were quite evidently very much upset by the sighting. Aside from the discrepancies, it was quite evident to the Intelligence Officers who interviewed these men that they had certainly seen some conventional type of aircraft. XXXXXXXXXXXXXXXX

Obviously this, by anyone’s measure, is a UFO case. It’s the usual story: qualified witnesses, classically unfamiliar visual description and performance, and indisputable CIA paperwork regarding the event. As stated, Loren E. Gross has detailed the same case, and provides very similar information. Starting on page 4, that work can be found here:

Furthermore, the above example demonstrates that the CIA has more records in various states of availability. How many more, and probably more importantly, what the significance of such records will be, is anyone’s guess. As for Scottish researcher Lara Elliott, I wish to thank her for transcribing the above document for this blog post. As far as I am aware, she is the only very young person in the field who wishes to contribute to the serious side of UFO research. Without new and young people, we are somewhat doomed. Lara’s level-headedness is exemplified at Fran Ridge’s gigantic archive – one of the best in existence – here: