And Get Excited.... Because Some Of It Is Still Classified


Some of you will be aware that in 1994 the Royal Australian Air Force’s (RAAF) official policy of accepting and investigating UFO sightings, or “Unusual Aerial Sightings” (UAS) as they called them, was massively downgraded to almost nothing at all. I knew there would be a paper trail (beyond what was already released years ago) which hadn’t been appraised before. In September, 2015, using the powerful Freedom of Information (FOI) Act, I submitted a detailed request to the Department of Defence (DoD) for any material that “went into” this policy downgrade. They issued me, at some cost, 42 pages of never-before-seen administrative records from that era. This is the third and final Part of this series. For those who wish to start from the beginning, have a look at Part 1 and Part 2.

Beyond what I have highlighted previously, there are some more records that are of some interest. A three page “Message Form” dated 24th December, 1993 was sent to six “Air Indicator Groups” (AIG). An AIG is a list of preset destinations for internal message routing. This particular message was titled “Unusual Aerial Sightings: Revised Policy” and had a file reference 138/93/DGPP. DGPP stands for Director General of Plans and Policy. The author was Air Commodore S. T. James who was DGPP for the RAAF in 1993 and 1994. Page 1 of the message states:

FOR MANY YEARS THE RAAF HAS BEEN FORMALLY RESPONSIBLE FOR HANDLING UNUSUAL AERIAL SIGHTINGS (UAS) AT THE OFFICIAL LEVEL. CONSIDERATION OF THE SCIENTIFIC RECORD SUGGESTS THAT, WHILST NOT ALL UAS HAVE A READY EXPLANATION, THERE IS NO COMPELLING REASON FOR THE RAAF TO CONTINUE TO DEVOTE RESOURCES TO RECORDING, INVESTIGATING AND ATTEMPTING TO EXPLAIN UAS.

THE RAAF NO LONGER ACCEPTS REPORTS ON UAS AND NO LONGER ATTEMPTS ASSIGNMENT OF CAUSE OR ALLOCATION OF RELIABILITY. MEMBERS OF THE COMMUNITY WHO SEEK TO REPORT A UAS TO RAAF PERSONNEL WILL BE REFERRED TO A CIVIL UFO RESEARCH ORGANISATION IN THE FIRST INSTANCE. KNOWN ORGANISATIONS ARE LISTED AT ANNEX A TO THIS POLICY.

SOME UAS MAY RELATE TO EVENTS THAT COULD HAVE A DEFENCE, SECURITY, OR PUBLIC SAFETY IMPLICATION, SUCH AS MAN-MADE DEBRIS FALLING FROM SPACE, A BURNING AIRCRAFT OR AN AIRCRAFT MAKING AN UNAUTHORISED INCURSION INTO AUSTRALIAN AIRSPACE. WHERE MEMBERS OF THE COMMUNITY MAY HAVE WITNESSED AN EVENT OF THIS TYPE THEY ARE ENCOURAGED TO CONTACT THE POLICE, CIVIL AVIATION AUTHORITIES OR COASTWATCH”

The message continues into Page 2 with a list known civilian UFO groups, which I won’t fully type out here. Page 3 finishes with:

2.          THE CHANGE IN POLICY WILL NOT BE PUBLICISED BY PRESS RELEASE. KNOWN UFO ORGANISATIONS WILL BE CONTACTED INDIVIDUALLY BY MAIL AND PROVIDED WITH A COPY OF THE NEW POLICY TOGETHER WITH A BRIEF EXPLANATION OF THE IMPLICATIONS FOR THEM.

3.            A LONGER TERM TASK WILL BE TO CENTRALISE ALL SIGHTING RECORDS HELD BY RAAF AND TO PLACE THEM IN THE AUSTRALIAN ARCHIVES. THE PRIVACY IMPLICATIONS OF PLACING THE RECORDS IN THE ARCHIVES WILL NEED TO BE UNDERSTOOD BEFORE THIS OCCURS.

I have imaged the above three pages below. 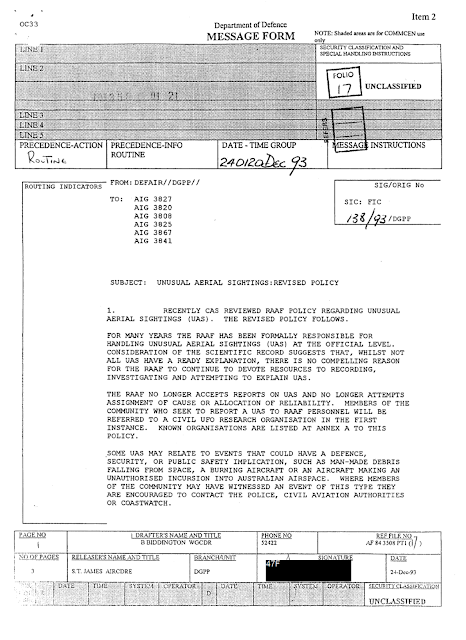 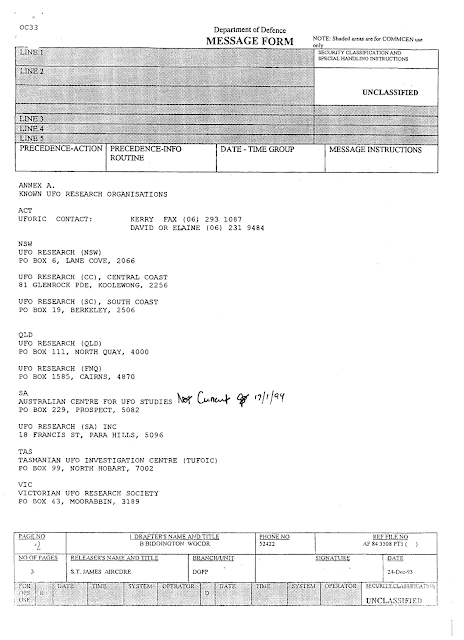 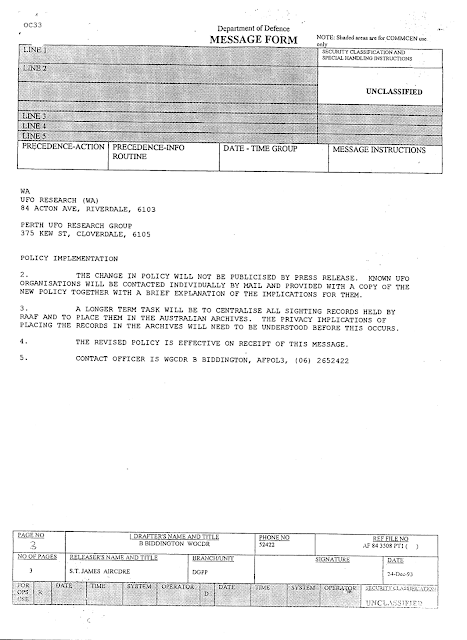 Another item which is of note is a reference copy of RAAF Headquarters document which forms a front cover sheet to the dry UAS Policy as it stood in 1984. Indeed, it was 1984 when the RAAF had last changed the policy when they made the decision to cease investigating any and all sighting submitted to them. Only sightings deemed of possible defence or security significance were to be studied. Anything less was simply logged, with a courtesy letter written to the witness. So, what did the 1984 policy look like when crammed into one page? Signed by Air Vice Marshal, J. W. Newman, who held the role of Deputy Chief of the Air Staff from 1984 to 1985, this outline of the 1984 UAS Policy states, in part:

“1.      Reference A raised the matter of problems associated with UAS investigation, and sought a revision of RAAF UAS policy and investigative procedures.

2.       Enclosure 1 states the amended RAAF policy on UAS. The essence of the policy change involves the Formation Intelligence Staff, in consultation with Command, ascertaining the defence or national security implication of a UAS report, and deciding if further investigation is warranted. This will decrease the number of UAS report.

3.       The press statement contained in Enclosure  2 is expected to be released shortly.  No public comment should be made prior to its release. Commands are not to implement the revised policy on UAS untill conformation of the press statement release has been made by message.

4.       Enclosure 3 lists various civilian research organizations associated with UAS and it would be prudent for Formation Intelligence Staff to obtain a list of organizations relevant to their locality, and offer these to the observer, of the RAAF has no interest in the UAS report.

Below is this important record. 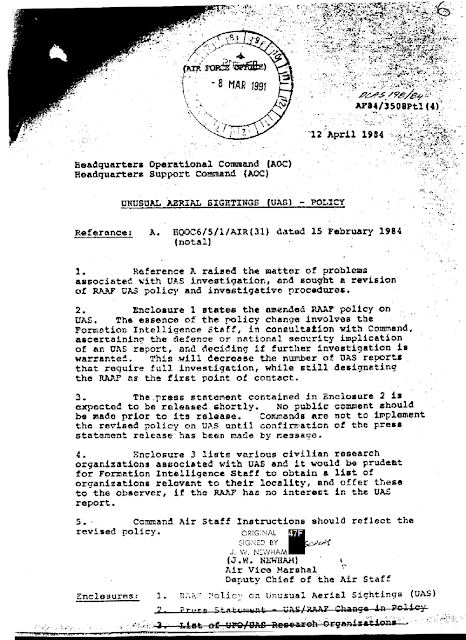 I could continue providing textual transcription and imagery of this significant piece of Australian DoD history, but this series needs to be finalized, and anyone who wants to study the records provided to me merely needs to ask. It is absolutely worth other researchers having a look at this material. I have taken much away from these records, and, if nothing else, it proves that the RAAF can locate and prepare 20 year old records with what appeared to me to be relative ease. Also, in regards to the redactions of text found in this release, on the 17th of January, 2016, I appealed the DoD’s FOI decision makers and asked for the blacked-out text to be released in full. I expect an answer by February’s end.

Finally, one very last piece of history that I wish to share is a copy of the RAAF’s 6 page UAS Sightings Annex A, parts 1 and 2. Part 1 was the actual pro forma questionnaire for witnesses to fill out if they so wished; and Part 2 was the Unit Investigation form, which was a RAAF officer’s “investigation” working papers for any given case. These clean, blank forms are how they appeared in the 1980s and early 1990’s. See below. 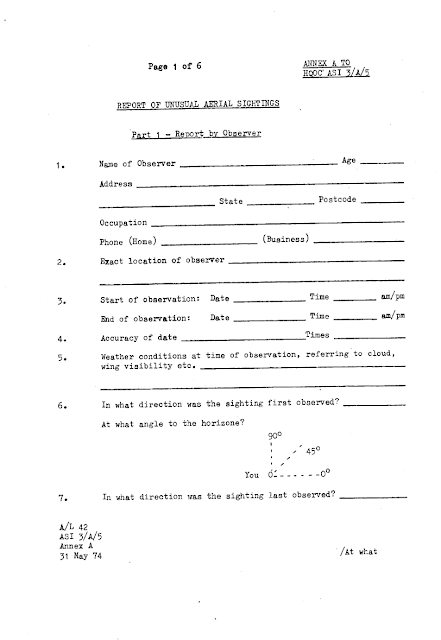 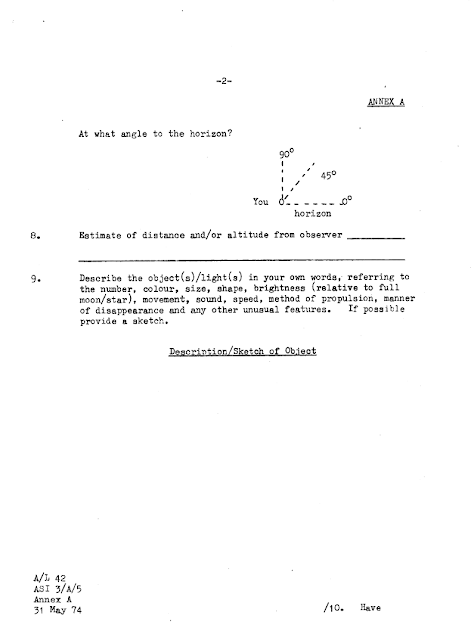 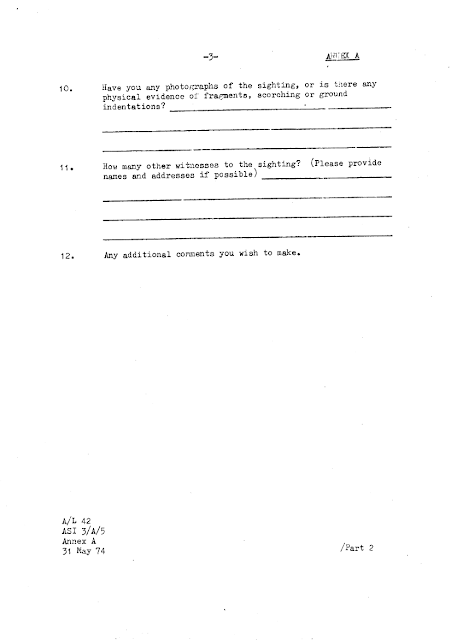 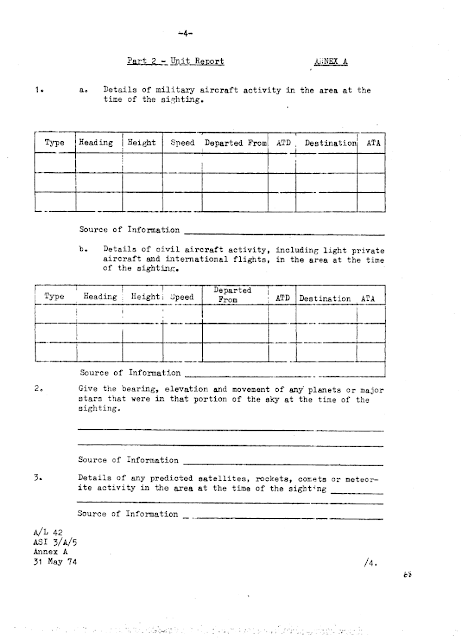 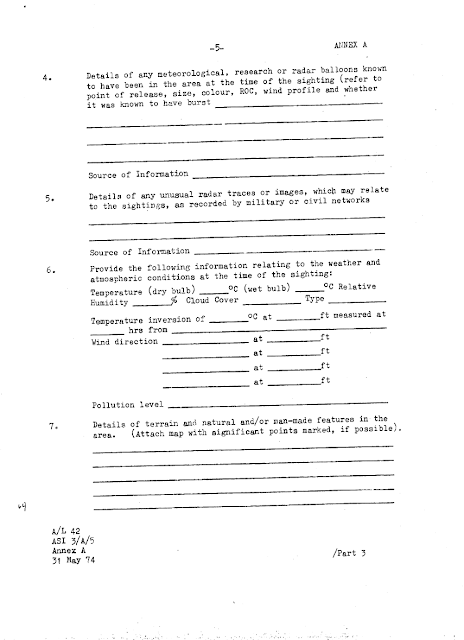 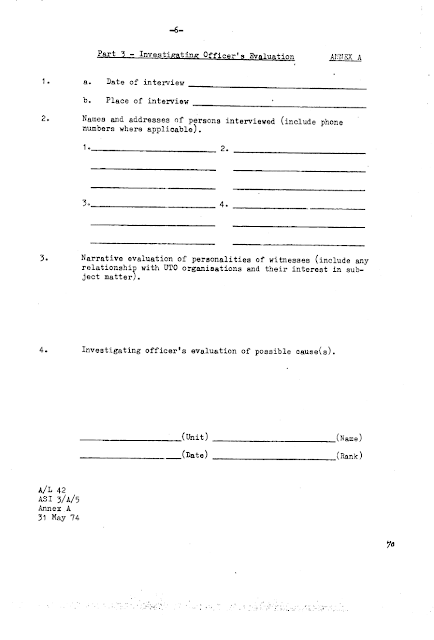