“The military deleted a passage about unidentified flying objects from a 2008 Air Force personnel manual just days after The Huffington Post asked Pentagon officials about the purpose of the UFO section.”

As suspiciously coincidental as it sounds – and it is a bit coincidental for my liking – I’ll mostly focus on what we know, as opposed to what we suspect.

The deleted material in question is none-other than the good old “CIRVIS” instructions, or, “Communications Instructions for Reporting Vital Intelligence Sightings”. These are the very same procedural reporting guidelines that have been promulgated within the United States military since the 1950’s. CIRVIS reporting procedures demand the timely reporting of “Unidentified Flying Objects” by military and civilian pilots, as well as other members of the United States armed forces. In fact, the first procedural doctrine that CIRVIS reporting procedures appeared in was JANAP 146(A), or, “Joint Army Navy Air Force Publication 146(A)”. Ordered by the Joint Chiefs of Staff (JCS) back in 1954, JANAP 146 continued to be promulgated and amended until 1975. By then, the publication was up to the “E” version, or JANAP 146(E), and it continued to contain the infamous CIRVIS chapter with “Unidentified Flying Objects” listed right there alongside, but distinct from, “Unidentified Aircraft”, “Missiles”, etc.

In May 1996, the JANAP 146(E) doctrine was replaced, partly, by a new set of guidelines titled “Air Force Manual 10-206 Operational Reporting” (AFM 10-206) The earliest version I have on file was disseminated by the Secretary of the Air Force (SAF) on the 7th of March, 2000. CIRVIS procedures are laid out in Chapter 5, pages 39 to 41, and, just in case there is any doubt, point 5.7.3. states “Report the following specific sightings.”. Point 5.7.3.3. states just three words: “Unidentified flying objects”. A newer version of the publication was disseminated on the 15th of October, 2008 and was upgraded to an Instruction, rather than a Manual. The title was, thus, “Air Force Instruction 10-206 Operational Reporting” (AFI 1-206) and, again, Chapter 5, CIRVIS reporting is laid out as clearly as ever. Then, in 2011, CIRVIS – and let’s not forget what it stands for: “Communications Instructions for Reporting Vital Intelligence Sightings” – vanished. A new version of AFI 1-206, dated 6th September, 2011, superseded the 2008 edition, but was massively reduced in scope and size, including the removal of CIRVIS procedures, and thus, a channel for reporting UFO’s.

This raises somewhat pressing questions, even awkward ones.

As stated above, the timing of all this business was suspicious: The Huffington Post had just lined up a date with a USAF official at the Pentagon to discuss CIRVIS procedures, particularly UFO’s. It does seem rather extraordinary that the very week a media platform makes serious enquiries into a specific area of on-going controversy and airborne national security, the very material to be discussed is deleted from militarily critical USAF doctrine. On the other hand, I am very conscious of the fact that hefty changes to military publications take months or years from the end-to-end proposal stage to final implementation: There are commander’s briefs to be reviewed; administrative drafts of the new material have to be written; discussion papers and position statements are collated for evaluation, and so forth. In other words, the removal of an entire chapter of a current USAF Instruction should be achieved through procedural bureaucracy, which, by very definition, is slow. This would be a good argument that the USAF had not removed the CIRVIS procedures due to the Huffington Post baring down on them.

Possibly more crucial are the questions of: Why have CIRVIS reporting procedures been removed? What, if anything, replaced them? And who ordered their removal?

This is where dogged British researcher David Charmichael stepped in. David and I have as many as twenty FOIA (Freedom of Information Act) being processed by branches of the US government at any one time. 2013 and 2014 were no exception. At this time, David submitted FOI requests asking for records regarding both the removal of CIRVIS from the Instruction, and actual reports of UFO’s submitted using CIRVIS procedures. In regards to raw CIRVIS reports, it is important to be aware that North American Aerospace Defence Command (NORAD) is the prime recipient when a CIRVIS report is made. Apparently, all CIRVIS reports end up there, or, are held briefly by regional Air Operations Center’s (AOC) on NORAD-dedicated systems as needed. Researchers have learnt that raw CIRVIS reports may not be kept anywhere on file for any longer than a few months, though we wonder if we are being told the truth on that little matter. Even armed with that knowledge, David took a punt on asking the USAF for actual CIRVIS reports, and of course was told they do not hold them. Simultaneously, David asked NORAD for copies of CIRVIS reports, and was giving the standard NORAD-exemption answer:

“NORAD as a bi-national organization is not subject to FOIA. No search of records will be conducted.”

While this charade was going on David was also submitting FOI requests to Headquarters, USAF asking for records relating to the removal of CIRVIS from “Air Force Instruction 10-206 Operational Reporting”, and it is here that some progress was made. Initially, the USAF came back with the worn out “No Records” response. How can the world’s most advanced Air Force not have any records related to a significant change in once-vital doctrine? Not one memorandum? Not one Commander’s brief? Hogwash. David appealed vehemently on the 5th of February, 2014 and also asked for “all records created in the course of handling” his previous FOI requests on the CIRVIS conundrum. Finally, the USAF came back with a number of documents. Of these, there was a completed Headquarters, Department of the Air Force “NO RECORDS SEARCH STATEMENT – RECORDS SEARCH – (UNIT)” form. It discusses how USAF staff came to the conclusion they didn’t have hold any CIRVIS reports, which, in ways, is related to the appeal discussed here. The actual area of the USAF that conducted searches is listed as “AF/A30-AC”. In the section that asks “Include rationale for ‘no record’ response” the following is stated:

“When submitted these reports were drafted by individual Command Post throughout the Air Force and were only transmitted to NORAD Command Center. No reports were transmitted to HQ Air Force per AFI 10-206 chapter 5, para 6.6.1 dated 15 October 2008. When 10-206 was re-written on 6 September 2011 the CIRVIS report was deleted because NORAD no longer required the report”

The form is dated August, 21, 2013. The above statement certainly confirms that “Air Force Instruction 10-206 Operational Reporting” was “re-written” when Huffington Post was in the throes of questioning the USAF head-on. Does “re-written” mean the Instruction was literally re-written on the 6th of September, 2011? If so, that flies in the face of what is supposed to happen with military doctrine. However, “re-written” could easily be a lazy way of saying “implemented”. The actual document is below. 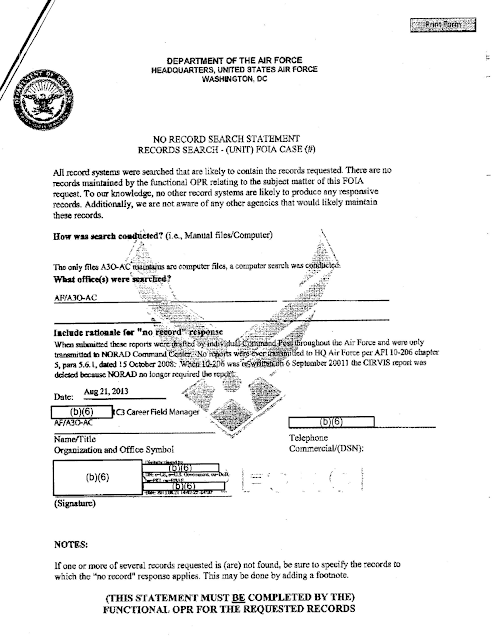 Furthermore, the above document came with a covering email dated August 22nd, 2013 and stated, in part:

Note: CIRVIS no longer exists and has been eliminated from the instruction. There is currently no affiliation with CIRVIS and AFI 10-206.”

I have imaged the document below. 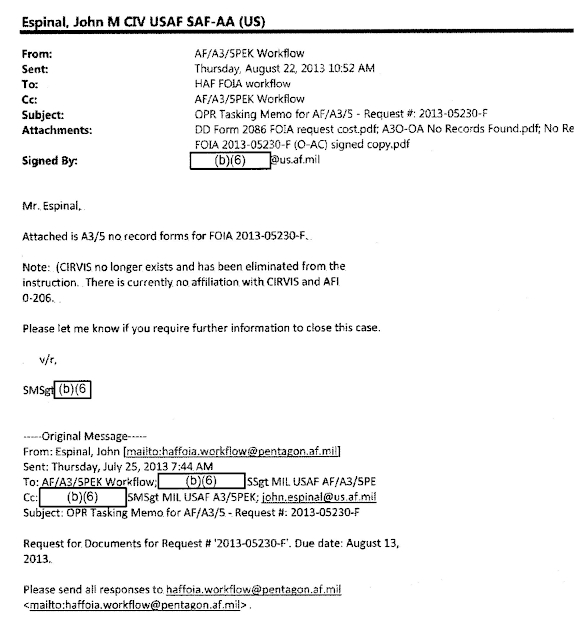 Finally, another document released to David was a copy of a “Consolidated Resolution Matrix” for “Air Force Instruction 10-206 Operational Reporting”. Without going into unnecessary detail, this document is a tabulated database matrix of items contained in the Instruction, and is updated when changes, additions or deletions are made to the contents of the Instruction. In the section regarding CIRVIS, the “Comments” column states:

“Remove non-1C3 AFSC reporting items not required by CJCS or CSAF. Reports including REPOL, MEDREP, CIRVIS are reports owned by Logistics, Medical and NORTHCOM respectively and do not involve 1C3 action of CJCS or CSAF notification. CIRVIS in particular is no longer required.”

In the “Rationale” column it is stated:

“The valid reporting processes need to be absorbed by their functional areas (Logistics and Medical). CIRVIS no longer exists.”

Though these short declarations don’t tell us why CIRVIS reporting of UFO’s, or anything else in the air that shouldn’t be there, were removed, they do confirm a few things. One, is that the US’s mighty Unified Combatant Command NORTHCOM (Northern Command) “owns” CIRVIS reports. For the uninitiated, NORTHCOM, controls NORAD – the ultimate destination for reports of aerial oddities, which is of course is what UFO researchers have been saying for years. As for a date – and much of the reason we are doing this is to find out when the removal decisions were being made – the USAF hasn’t actually still provided us anything! You heard that right! In all these background documents, there still isn’t a date given confirming when CIRVIS reporting was not needed, thus we cannot confirm Lee Speigel’s theory that shenanigans were going on when he was about to sit them down and get some answers. However, there is one piece of information that may be telling. The above mentioned matrix was emailed to David Charmichael in Adobe PDF form, and the actual file title was “AFI 10-206 – MAJCOM Consolidated Matrix Inputs-3digit – 2010.pdf”. Note the “2010”. Does this mean that the CIRVIS removal was already in progress in 2010 but not yet announced? Could it be nothing to do with the year 2010, and just some number related to something else? Or, maybe, just maybe, could it be a ploy by USAF staff to throw researchers off, even for a laugh. Below is an image of the above mentioned matrix. 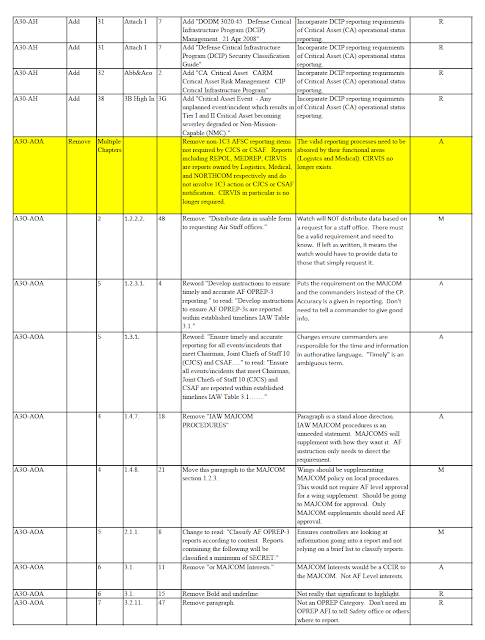 Whatever the true situation, there is much more here to be discovered. One of the most puzzling questions, to me, is this: Do the USAF actually want to be buried in FOI requests? Is the release of more satisfactory information so bloody tough for them that they are prepared to gamble that we will drop the matter? David and I submit FOI requests all day long, and there is nothing that will change that, especially on a matter as grave as the urgent reporting of UFO’s by combat pilots and the like.  Finally, Lee Spiegel’s original Huffington Post article can be found here:

http://www.huffingtonpost.com.au/entry/air-force-deletes-ufo-rep_n_982128.html
Posted by Paul Dean at 04:47