Rarely Seen US Army Documents Available Again
Who remembers the 1973 case where a UFO nearly destroyed a US Army Reserve helicopter? You should. Even the debunkers and sceptics get uncomfortable with this one. If, by some twist of fate, you don’t, perhaps you will recognise the infamous one page “US Army Disposition Form” report which was typed up and signed by all four of the crew – 1st. Lt. Arrigo Jezzi, SSgt. John Healey, SSgt. Robert Yanacek, and Capt. Lawrence J. Coyne. I have imaged it below. 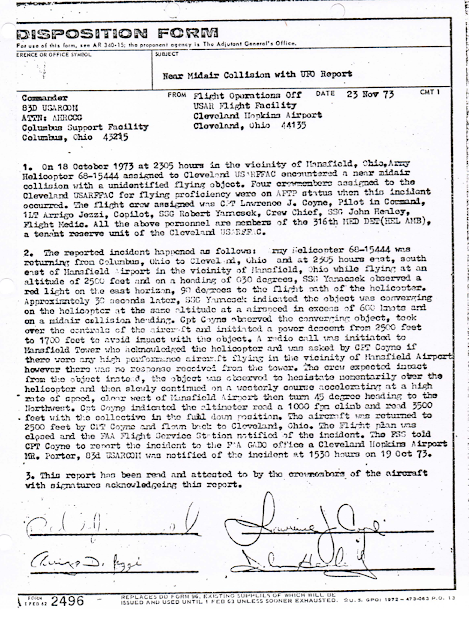 This document is very well known, and is quoted whenever the case is discussed. The “Subject” box has “Near Midair Collision with UFO Report” typed in. What a start to an official military report straight after the incident occurred?

What many researchers don’t know, though, is that there were actually four more pages of USAR paperwork with this case. Researcher Robert Todd had the US Army’s Office of the Assistant Chief of Staff for Intelligence (ACSI) release these records under the Freedom of Information Act (FOIA) after some of the most abusively demanding correspondence anyone will ever from a UFO researcher. The records, on top of the above mentioned disposition form, are four “Operational Hazard Reports”. This type of form was also known as a “DA Form 2696” and is vital for recording hazardous events.  An air safety or flying “hazard” was, in 1973, defined by the US Army as “any condition or act that affects or may affect the safe operation of Army aircraft…”. After the startling UFO encounter, each of the four crew filled out one of these forms. There are tick-boxes and sections that need to be filled in, and certainly were in this case, such as “Departed From” and “Flight Atmospheric Conditions”. The most interesting sections, however, are the “Description/Explanation/Comments” box, the “Other Aircraft/Obstacle (Type A/C)” box, and the “Other Aircraft/Obstacle (Obstacle Description)” box.

I have imaged the form below. 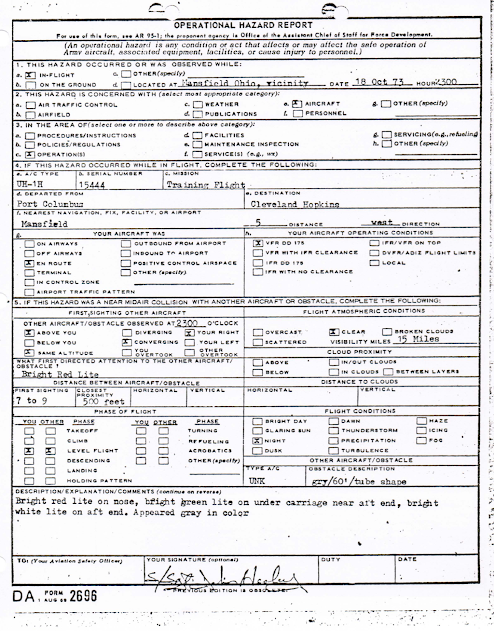 SSgt. Robert Yanacek, the crew chief for the flight, hand wrote his answers rather than using a typewriter. Also, the copy of this form has a small amount missing from the far left-hand side. In the “Other Aircraft/Obstacle (Type A/C)” box, he wrote in “Unidentified”. Next to it, in the “Other Aircraft/Obstacle (Obstacle Description)” box, he writes “Solo – Oblong with lights”. The “Description/Explanation/Comments” section, which slightly suffers the effects of a poor copying when the records were furnished to Robert Todd, Yanacek states:

“??ject approached at same altitude from 8 – 10 mi out, ?? the east, forcing acft commander to take evasive ??tion. Object made no attempt to alter its flight path.” 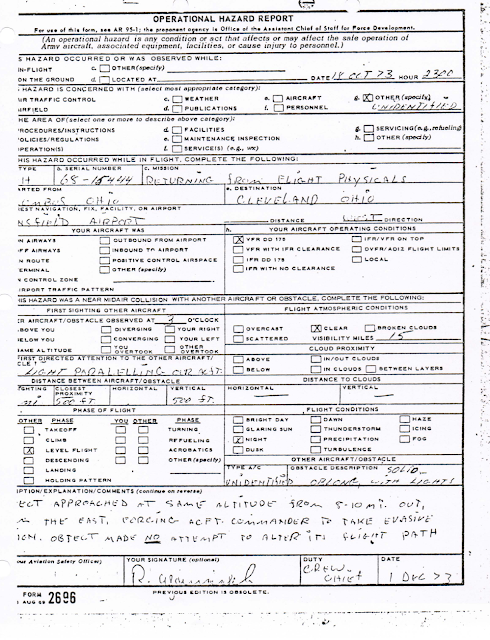 The third hazard report form was filled out, with a typewriter, by 1st. Lt. Arrigo Jezzi, who was at the controls of the helicopter on the front left-hand side. In the “Other Aircraft/Obstacle (Type A/C)” box, he has entered in “UFO”. This is simultaneously both nebulous, as well as paradoxically explicit. The “Other Aircraft/Obstacle (Obstacle Description)” box has been left blank. For the “Description/Explanation/Comments” section Jezzie states:

“Obstacle sighted on the Eastern horizon. First impression was that red light spotted was a radio tower. Then pilot and crewchief noticed its movement, and that its direction was toward our aircraft. I spotted this obstacle at about 500ft above us flying rapidly in the westerly direction. Only thing sited was a highly intense white-green trailing light. Speed of obstacle and/or a/c was estimated at 500 knots or better.” 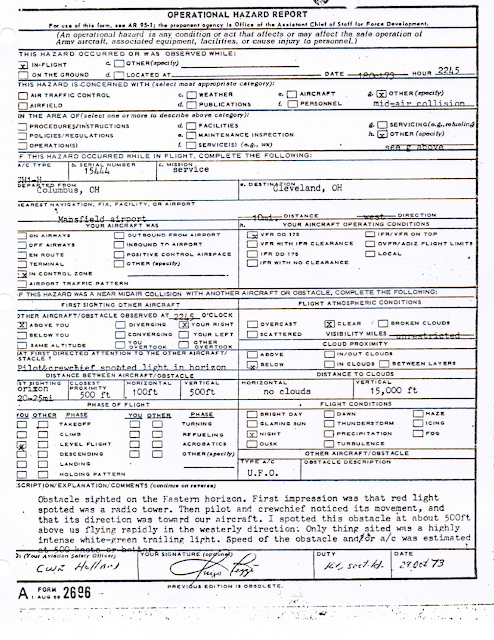 The final hazard report form I have on file was filled out by Capt. Lawrence J. Coyne who was commanding the flight from the front right-hand. In the “Other Aircraft/Obstacle (Type A/C)” box, he has entered in “Unknown”. For the “Other Aircraft/Obstacle (Obstacle Description)” Coyne has written “See Attached Sheet”. This is interesting because it refers to a annotated sketch of the object created by Coyne, which I will present further on. Finally, the “Description/Explanation/Comments” section has been left black, possibly because Coyne was instrumental in typing out and submitting the more well-known “US Army Disposition Form” which I presented at earlier, and where his narrative is longer than what can be entered into his the hazard form. See below. Finally, as mentioned above, there is one final sheet of paper – an annotated sketch of the object drawn by Coyne – was released with the hazard reports by the US Army’s record keepers. It is titled, in Coyne’s handwriting, “Continuation Sheet to DA Form 2696, Item #5 Obstacle Description: Continued.” Coyne indicates the “direction of movement” with an arrow, and clearly states, “grey metallic hull”, “Constant bright red light”, and “50 to 60 feet in length”. Finally, he writes “Green constant light that moves similar to a spot light only brighter” next to the drawing of the object and indicates where this light was apparently emanating from. I have imaged it below. 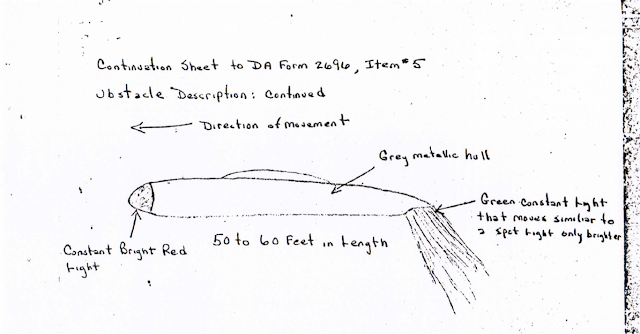 Again, this case has been covered very heavily. However, for ease, I will provide a brief synopsis above the official records thus far presented. A USAR UH-1H helicopter, based in Cleveland, Ohio, was returning from Columbus, Ohio, at about 10:30pm following regularly scheduled physical examinations. Weather was clear and starry. The four-man crew, commanded by Lawrence Coyne, a 19-year veteran of the USAR, noticed a red light on the horizon which appeared to be converging on the helicopter at a worrying speed.

Jennie Zeidman, associate of astronomer J. Allen Hynek, published a report titled “Helicopter-UFO Encounter Over Ohio” for the Centre for UFO Studies in 1979 after meticulously investigating the case. Zeidman states:

“Just as a collision appeared imminent, the unknown light halted in its westward course and assumed a hovering relationship above and in front of the helicopter. “It wasn’t cruising, it was stopped. For maybe ten to twelve seconds – just stopped,” Yanacsek reported. Coyne, Healey, and Yanacsek agree that a cigar-shaped, slightly domed object subtended an angle of nearly the width of the front windshield. A featureless, gray, metallic-looking structure was precisely delineated against the background stars. Yanacsek reported “a suggestion of windows” along the top dome section… …The green beam passed upward over the helicopter nose, swung up through the windshield, continued upward and entered the tinted upper window panels. At that point the cockpit was enveloped in green light. Jezzi reported only a bright white light, comparable to the leading light of a small aircraft, visible through the top “greenhouse” panels of the windshield. After the estimated ten seconds of “hovering,” the object began to accelerate off to the west… …After the object had broken off its hovering relationship, Jezzi and Coyne noted that the magnetic compass disk was rotating approximately four times per minute and that the altimeter read approximately 3,500 feet; a 1,000 foot-per-minute climb was in progress. Coyne insists that the collective was still bottomed from his evasive descent. Since the collective could not be lowered further, he had no alternative but to lift it, whatever the results, and after a few seconds of gingerly maneuvering controls (during which the helicopter reached nearly 3,800 feet), positive control was achieved. By that time the white light had already moved into the Mansfield area. Coyne had been subliminally aware of the climb; the others not at all, yet they had all been acutely aware of the g-forces of the dive. The helicopter was brought back to the flight plan altitude of 2,500 feet, radio contact was achieved with Canton/Akron, the night proceeded uneventfully to Cleveland.”

The case has never been solved.
Posted by Paul Dean at 19:27