In Part 1 of this series “OPREP–3 - A Classified US Military Reporting Channel For UFO Incidents?” I discussed a US military–wide reporting channel known as the “Operational Reporting” system, shortened often to “OPREP”. I highlighted that one category of OPREP, namely category 3, is defined as a serious “Event/Incident”, and that UFO, or UFO–like events, had been reported directly to the highest levels of command in the 1970’s. Those events included the reporting of intrusive “unknown helicopters” and “objects” from nuclear–armed United States Air Force (USAF) Strategic Air Command (SAC) bases including Loring AFB, Wurtsmith AFB, Malmstrom AFB, and a host of others. Also, the United States Navy’s (USN) Pinecastle Electronic Warfare Range suffered a mysterious UFO event that was reported via the OPREP–3 system. Most importantly, these cases are not hand–down–rumours, but are supported by hundreds of officially release records obtained under the Freedom of Information Act (FOIA) by researchers. I made specific efforts to image those records, and will continue to do so in this Part 2.

OPREP–3 reporting instructions are laid out in a variety of publications at different levels of the US military. Perhaps the highest level doctrine to mention OPREP–3’s are those promulgated by the Chairman of the Joint Chiefs of Staff (CJCS). One recent example is a manual titled “Joint Reporting System Situation Monitoring Manual”, and was promulgated on the 31st of January, 2011. It is coded “CJCSM 3150.05D” and is unclassified in entirety. Beneath the CJCS, all the Unified Combatant Command’s (UCC) and Major Commands (MAJCOM) of the US Armed Forces publish their own versions of OPREP–3 doctrine, each slightly different.

“The OPREP-3 reporting system is used by military units at any level of command to report significant events and incidents to the highest levels of command. OPREP-3 reports use command and control channels to immediately notify commanders of any event or incident, which may attract international, national, or significant news media interest. Reports must be timely, concise, and include sufficient information to allow action addressees to fully understand the situation and provide information to other levels, as required. The report is established to provide time-sensitive information on which to base an appropriate response to any significant event or incident that has occurred or is in progress…”

“Command Posts use the OPREP-3s to immediately notify commanders of any significant event or incident that rises to the level of DoD, AF, or MAJCOM interests. Submit the applicable OPREP-3 regardless of whether or not the event is being reported through other channels…”

Furthermore, there are different “categories” of OPREP-3’s that, while not mandatory, can be chosen by for specific events or levels of interest. Those categories are distinguished by certain “flagwords” that are attached to the OPREP-3 report. Paragraph 3.2. of AFI 10–206 states:

“OPREP-3 reports categorize events or incidents according to their nature. FLAGWORDs associated with each category aid prompt transmission, processing, and distribution of the reports by alerting people to their importance. The following flag word reports make up the OPREP-3 system.”

Of interest to us are the flagwords “PINNACLE” and “BEELINE”. Another one, used only by the United States Navy (USN), is “NAVY BLUE”. When fully typed out, these flagwords will appear immediately after the term “OPREP-3”. An example would be “OPREP-3 BEELINE”. Often, the full term is shortened so the flagword appears as a single letter. “OPREP-3 BEELINE”, hence, is shorted to “OPREP-3B”. It is also important to note that these flagwords, and their meaning, has barely changed in forty years. The category which may be the most important to us is a called a “PINNACLE”, or “OPREP-3P”.  AFI 10–206, Paragraph 3.2.1. states:

“PINNACLE (OPREP-3P). This message is used by any unit to provide the National Military Command Center (NMCC) and, as appropriate, combatant commands and services with immediate notification of any incident or event where national-level interest is indicated…”

The Instruction goes on to state the kinds of “incidents” or “events” that would cause the transmission of an OPREP-3P. Of interest is Paragraph 3.2.1.6. states:

Of course, we have seen an OPREP-3 PINNACLE used for “unidentified object” intrusions before. As I highlighted in Part 1 of this series, the Command Post at Loring Air Force Base, Maine, sent an “IMMEDIATE” telex to the Military Command Center (NMCC), and other commands, on November 1st, 1975, which contained this line of text:

And, below that, the message stated:

There is no ambiguity here. OPREP-3P reporting of UFO events is clearly something that the US government would prefer to stay tightly within its control. The question is, just how many have there been in the last four decades?

“BEELINE (OPREP-3B). Used to report any event or incident that requires Air Force-level interest, but not requiring OPREP-3 PINNACLE reports. Although the report normally remains within US Air Force channels, commanders may add other addressees, as appropriate to avoid duplicate reporting. AF may make BEELINE information available to agencies outside the Air Force (e.g., NMCC, State Department) based on the situation.”

We have seen the flagword “BEELINE” before. On the 30th Oct, 1975, Wurtsmith Air Force Base, Michigan, the former home of nuclear-armed 379th Bomb Wing, endured an event involving low flying, “unidentified aircraft” which unexpectedly encroached into the “no fly” airspace above the base. A number of OPREP-3’s were sent from the Wurtsmith AFB Command Post to SAC Headquarters, and other areas of the USAF, and, indeed, one of them was an OPREP-3 BEELINE, for which we have the actual telex documents for. The key line of text states:

There are other OPREP-3 flagwords that could potentially be used when submitting a UFO incident to higher commands. One is a special type of OPREP-3 PINNACLE called a “NUCFLASH”, or “OPREP-3PNF”. Paragraph 3.2.2. of AFI 10–206 states:

“PINNACLE NUCFLASH (OPREP-3PNF). Used to report an event, accident, or incident that could create the risk of a nuclear war. This message has the highest precedence in the OPREP-3 reporting structure. Report any of the following as an OPREP-3PNF:

3.2.2.4. Reports of cruise missiles or non-friendly, non-US or non-allied aircraft not on an approved flight plan that could pose a threat.”

In a charged and rapidly changing environment, could a serious UFO event be mistaken for a “ballistic missile launch or space launch” or “space object reentering the earth’s atmosphere”, especially when very little is yet known about the event? What about “reports of cruise missiles or non-friendly, non-US or non-allied aircraft not on an approved flight plan...” and other similar events? The reporting of urgent space-borne events using OPREP-3 PINNACLE procedures is not new. The North American Aerospace Defence Command (NORAD) and Aerospace Defence Command (ADC) maintained a joint regulation, issued on the 1st of May, 1983, titled “NORAD/ADC Regulation 55-103 Operations – Errant Launch/Space Event Reporting” (N/A REG 55-103). Paragraph 3.c.1. states that the old United States Space Command’s (SPACECOM) Space Control Center (SCC) and Space Surveillance Center (SSC) will, during unusual or unexpected space activity:

“Determine reportability for all objects which fail to achieve a planned orbit, objects already in orbit which decay or that are predicted to decay, deorbits, and satellite breakups. If these objects are reportable, notify the… …NMCC via an OPREP-PINNCACLE report (significant space event).”.

This page is imaged below. 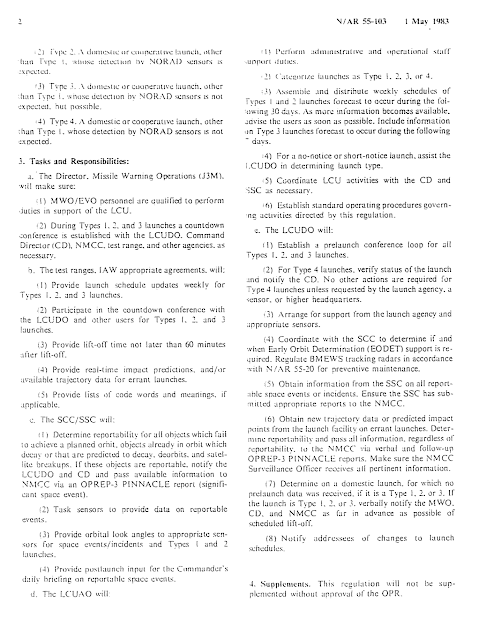 The US Navy (USN) has some of its own flagwords for OPREP-3 reporting. One of them is “NAVY BLUE”. As I discussed in Part 1 of this series, the USN’s Pinecastle Electronic Warfare Range in Florida was visited by an unidentifiable object on the night of May 14th, 1978. There was primary radar confirmation, evasive action by the unknown entity, and significant visual confirmation from the ground. It was an “OPREP-3 NAVY BLUE” which alerted the Commander–in–Chief of the USN’s Atlantic Fleet (CINCLANFLT) about the incident. The two page telex states:

“Used to provide the Chief of Naval Operations (CNO) and other Naval commanders notification of incidents that are of high Navy, as opposed to nation-level, interest.”

“OPREP-3 NAVY BLUE (OPREP-3NB). This report provides the Chief of Naval Operations, through the Navy Operations Center, information on any significant event or incident that is not of national-level interest.”

An OPREP-3NB may not be as gravely serious as, say, an OPREP-3P, but the fact that the Chief of Naval Operations was urgently made aware of a UFO incident via any system at all is still worthy of discussion. Again, like the other OPREP-3 reportable events I have detailed above, how many UFO-associated OPREP-3NB’s have been sent to-and-fro within the USN in the last few decades?

Speaking of recipients, just what sort of commands and agencies receive OPREP-3 reports? If sent from within the USAF, a base commander, or anyone else cleared to use the OPREP-3 system, has a degree of discretion regarding who is on the “distribution list” of the report. Some of the addressee’s are pre-arranged, and some depend on the type of serious event in progress. All OPREP-3P’s must be sent, at minimum, to the National Military Command Center, some USAF Major Commands (MAJCOM’s), the White House and State Department, and often the North American Aerospace Defence Command (NORAD), and other areas within the wider Department of Defence (DOD). An OPREP-3B will normally remain within USAF channels, including the MAJCOM the base is subordinate to, plus nearby bases and, if appropriate, the NMCC. And OPREP-3H also usually stays within the USAF MAJCOM that the base is organised under, and often not much further. A good example of a distribution list that we know received an UFO related OPREP-3, in this case a PINNACLE, is the November 1st, 1975 incident that plagued Loring AFB. Imaged below is the Loring OPREP-3 PINNACLE report. The top two thirds of the page contain the distribution list. 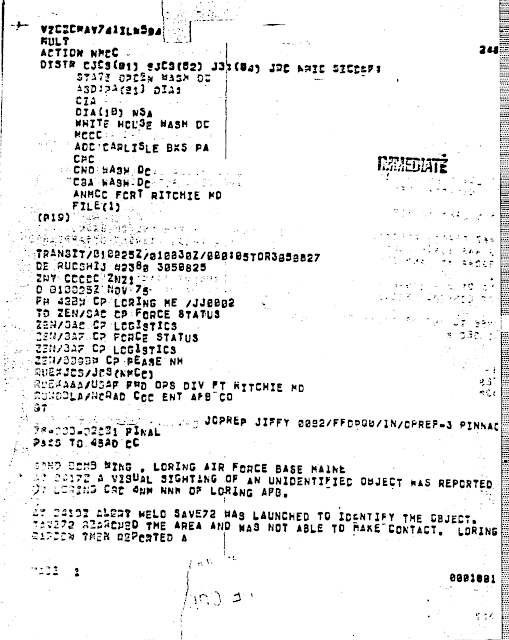 Included here is the NMCC, the Chairman of the Joint Chiefs of Staff Committee (CJSC), the Secretary of the Joint Chiefs of Staff (SJCS), the State Deaprtment, the Defence Intelligence Agency (DIA), the Central Intelligence Agancy (CIA), the White House, the USAF’s Major Command Coordination Center (MCCC), the Alternate National Military Command Center (ANMCC) at Fort Ritchie, NORAD’s Combat Operations Center (COC), plus various Strategic Air Command (SAC) and 8th Air Force components. And that’s not even all of them. The fact that any of them received UFO reports of any sort, especially the calibre of these areas of the US government, is somewhat alarming. Consider what the US government had systematically been saying since the 1960’s. Researchers are well aware that the Secretary of the USAF, Robert C. Seamans, Jr, famously announced, on the 17th of December, 1969, that no US military agency will continue the reporting, or receiving of reports, of UFO events, and, that:

Nothing has changed. The US government still recycles the same tired lines of dogma that three generations of researchers have had to listen to. That OPREP-3 reports have contained UFO situations is undeniable. Have there been many more? And what sort of analysis of such events has been conducted? Currently, access to OPREP-3 records is impossible. But that may soon be about to change. In Part 3 of this series, which I had hoped would be quite short, I will detail my, and colleague David Charmichael’s, struggles to see that the Office of the Secretary of Defence (OSD) and the Joint Chiefs of Staff (JCS) release OPREP-3’s, the work of others before us. I shall also reveal the contents of an OSD reply letter sent to UK researcher Dr. Armen Victorian in the 1990’s, which, despite being twenty years old, could be one of the most important lead we’ve had in decades.
Posted by Paul Dean at 05:26