The Federal Aviation Administration And UFO's

The US Department of Transportation’s (DOT) Federal Aviation Administration (FAA) is the United ’States airspace and civilian flight regulation body. Their responsibilities include the management of national airspace, air traffic control services and flight safety promotion. The FAA’s mission also includes an interoperable role with the United States Air Force (USAF) and North American Aerospace Defence Command (NORAD) to assist in atmospheric air defence and military flying activity. For example, primary radar coverage of the USA is partly achieved by the joint FAA-USAF Joint Surveillance System (JSS). The most important component of that system is the Air Route Surveillance Radar (ARSR) network which is capable of detecting and tracking any sizable body in US airspace and somewhat beyond. Raw radar data from long-range radar sites is instantly fed to FAA and USAF sites to build up a wider “recognised air picture” of exactly what is in the American skies at any given time.

Despite this awesome capability, the FAA, apparently, does not deal with “Unidentified Flying Objects” (UFOs). Dozens of Freedom of Information Act (FOIA) requests submitted to the FAA, over the last thirty or so years, have yielded almost nothing of substance. There are only a couple of FAA publications that mention UFO’s. One is the “Federal Aviation Aeronautical Information Manual, Official Guide to Basic Flight Information and ATC Procedures”, often simply called the “AIM”. The latest version of the AIM was promulgated on the 10th of December, 2015. John Greenwald, owner of “The Black Vault” website, was probably the most recent FOIA requester to be furnished with a copy of the relevant pages that mention UFO’s. Researcher Alejandro Rojas recently discussed this matter with John Greenwald, and the story can be seen here. Briefly, the above mentioned FAA manual states, in Section 7−6−4, states:

b. If concern is expressed that life or property might be endangered, report the activity to the local law enforcement department.”

This has to be one more puerile pieces of officially sanctioned guidance I have seen. Flight crews do still report UFO’s and other aerial oddities, but they seem to have nothing better to fall back on, at least where the FAA is concerned. One could argue about this topic ceaselessly, but it’s an old story, and nothing has changed one way, or another. Another FAA publication, titled “JO 7110.65W Air Traffic Organization Policy”, last published on the 26th of May, 2016, has exactly the same short entry on UFO’s as the above detailed AIM manual.

In Greenwald’s original FOI request, dated April 12th, 2016, he asked for copies of:

“…records, electronic or otherwise, of ALL FAA manuals, regulations and publications - that deal with, or mention, Unidentified Flying Objects (UFOs) and/or Unidentified Aerial Phenomena and/or Unexplained Phenomena, and/or any other derivative that may be used the your agency. This would include, but not be limited to, all manuals, publications and/or instructions that pertain to pilots (commercial or otherwise), Air Traffic Controllers, or employees of the FAA.”

It should have been fairly clear to the FAA that Greenwald’s request should have covered unknown or unidentified aircraft that are detected and tracked on primary radar networks. This happens all the time. Aircraft without their International Friend or Foe (IFF) function switched on are common. Then there are balloons, many unmanned aerial vehicles (UAV), and anything else that is IFF-quiet or unable to communicate by radio. In fact, everything is a UFO – that is “Unidentified Flying Object” – until it is positively identified. The FAA must, therefore, have gigantic quantities of information on “UFOs”. There would be policy and plans materials, actual radar imaging, reports and briefs relating to unknown aircraft crossing international boarders, training manuals for ATC’s, and myriad other records that deal with what the FAA’s role is in processing unidentified aircraft. So, what Greenwald was furnished with is almost irrelevant in the scheme of things. The staff handling the request must have decided that he solely meant “UFO” and “Unidentified Aerial Phenomena and/or Unexplained Phenomena” to be of the media-induced, kooky “flying saucer” variety. However, it is also the issue, on a serious level, that no one, especially the FAA, wants to discuss. Billy Cox, who writes most entertainingly in his De Void blog, calls this caper “the great taboo”.

So if “UFO” and “Unidentified Aerial Phenomena and/or Unexplained Phenomena” are not on the FAA’s books, then “unidentified” aircraft, “unknown” radar tracks, etc certainly must be.

And now I am attempting, in a series of reports, to somehow lift the lid on this issue.

An FAA Order, titled “7610.4J Special Military Operations”, put into effect on November the 3erd, 1998, contains information that may one day lead us to significant aircraft identification records. Chapter 5, titled “Aircraft Movement Information Service” (AMIS) is worth a general glance, but it is section 8, titled “Violations of ADIZ Regulations”, that may point to a cache of FAA records which would relate directly to unknown and unidentified aircraft. Section 8 is itself divided into sub-sections. Thus, for example, chapter 5, section 8, sub-section 1, is written “5-8-1”.

Chapters 5-8-1 through to 5-8-4 of “7610.4J Special Military Operations” discusses the sharing of data between the FAA and NORAD when an “unknown radar track” appears on dedicated primary radar systems. Also shared is information on known flight activity and attempts at aircraft identification. When NORAD orders USAF combat aircraft to intercept the object is causing the “unknown radar track”, FAA controllers are part of the process, and are required to fill out either “Part A” or “Part B” of a special form. The form is called an “AMIS Unknown/Intercept Log”, as we shall see.

“AMIS controllers shall complete Part A of the AMIS Unknown/Intercept Log (FIG 5-8-1) when an unknown radar track is reported by NORAD air defense facilities and the aircraft is identified before intercept. Each Unknown/Intercept Log shall be numbered consecutively for each calendar year.”

“AMIS controllers shall complete Part B of the Unknown/Intercept Log when an unknown radar track was intercepted to identify the aircraft.”

So, this is simply saying that when NORAD send combat jets to identify a target, the FAA Air Traffic Controllers will be part of the tracking and communications process, and will fill out a “AMIS Unknown/Intercept Log”. If the unknown/unidentified aircraft or object is somehow identified before the jets chase it down, “Part A” of the log form will be filled out. If the unknown/unidentified aircraft or object is only identified after the jets get there, then “Part B” is filled out. This raises some very relevant questions. How often do NORAD controlled USAF jets have to do this? What sort of unknowns vanish before intercept occurs? What sort of things have they identified upon arrival? Are they all simply unannounced or distressed aircraft that have lost the ability to communicate? Or are other oddities sometimes seen? Below is relevant page from the above detailed FAA publication. 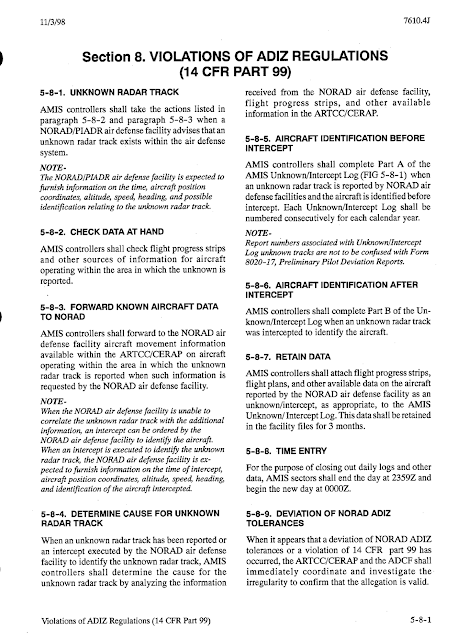 The “7610.4J Special Military Operations” provides a copy of the “AMIS Unknown/Intercept Log”. It is designated “Figure 5-8-1”.  For unknown/unidentified aircraft or objects, “Part A” is titled “Unknown” and FAA staff can fill out the blocks one would predicably expect on a form such as this. There are sections for “Time”, “Coordinates”, “Heading”, etc. Of note are sections titled “Possible Identification” and “Remarks”. There are also blocks for “Reason Unknown” which give examples that staff would circle like “Late Flight Plan” and “Pilot Error”. There is also an “Other (Specify)” section.  “Part B” contains more technical sections that are, as explained above, relate to a successful identification after jets get to the offending unknown. The “AMIS Unknown/Intercept Log” is imaged below. 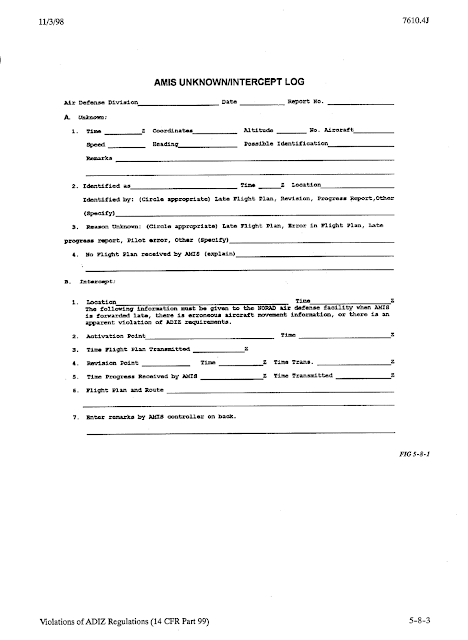 The above discussed publication is from 1998. What about a current example? Indeed, there is a much more recent version now available, but only in redacted form. My college David Charmichael had it furnished to him under the FOI Act in December, 2015. It is titled “JO 7610.4JS Special Operations”, which is very similar to the title of the 1998 version. It was published on April the 3erd, 2014. The chapter layout has changed though. Chapter 5, section 8, is now chapter 5, section 5. The contents, despite being heavily redacted, appear to be similar to the old version, as we can see below. 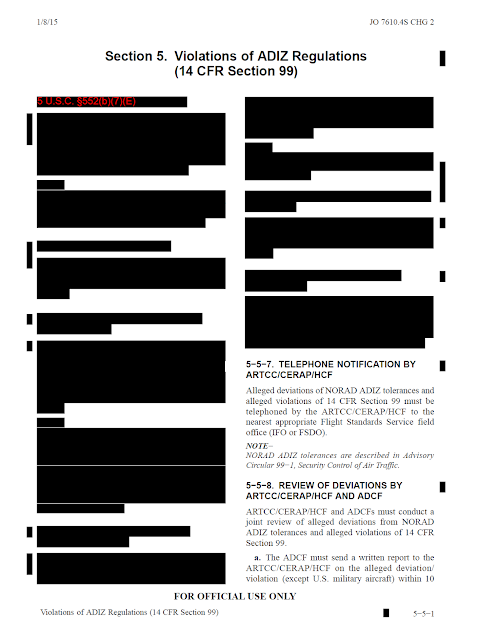 Likewise, the “Unknown/Intercept Log”, now designated as “Figure 5-5-1”, is similar to the old form, but with heavy redactions. Also, the name of the form has now, apparently, changed to “AAMS Unknown/Intercept Log”. In FAA language, “AAMS” stands for “Area Airspace Management System ”.  The redactions are in place due to the material apparently being exempt from public release under 5 U.S.C 552(b)(7)(E)  which:

Below is the current, redacted version of the “AAMS Unknown/Intercept Log”. 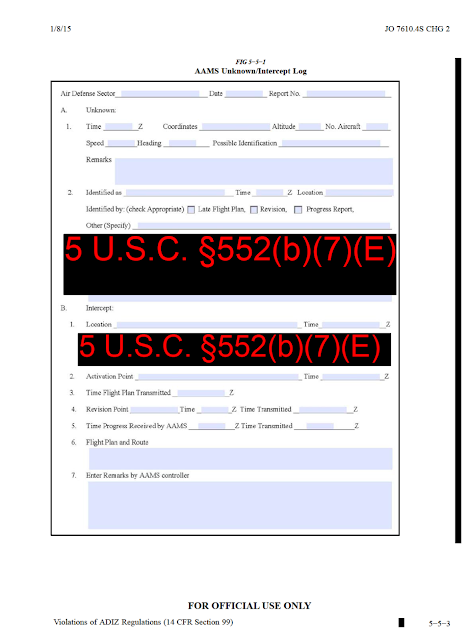 Of course, none of this is proof that UFO’s – above and beyond unknown or unidentified aircraft and the like – are being routinely detected on combined NORAD and FAA systems. Having said that, examples of these FAA Unknown/Intercept forms have never been released, to my knowledge at least, and we simply do not know what has been hurriedly scrawled on to them during tense detection, tracking and interception events. Maybe we will one day know. Part 2 coming soon.
Posted by Paul Dean at 06:15