There are currently two Australian government agencies who are equipped to, and indeed do, accept UFO reports from civil aviation flight crews. They are the Australian Transport Safety Bureau (ATSB) and Airservices Australia (ASA). Of course, they do more than deal with infrequent UFO reports, and, in fact, are responsible for airspace management, the functionality of airports, pilot licensing, air safety, navigational systems, etc. Australia’s Department of Defence (DoD) also accepts and processes UFO reports, but their system is quite different from those of the ATSB and ASA. The DoD’s Directorate of Defence Aviation and Air Force Safety (DDAAFS) accepts reported military UFO cases via a form called an “Air Safety Occurrence Report” (ASOR). ASOR’s are processed through the Defence Aviation Hazard Reporting and Tracking System (DAHRTS), and are studied within the Closed Loop Hazard/ASOR Review and Tracking System. DDAAFS military UFO reports have proven very hard to obtain. But ATSB and ASA reports have been somewhat easier. For the purpose of this piece, I will focus on ASA. Describing themselves as “…a government owned corporation providing safe, secure, efficient and environmentally responsible services to the aviation industry” ASA is responsible for national airspace management, air traffic control, aeronautical information services, aviation communication, radio beaconing, and the like.  Some time ago I submitted a Freedom of Information (FOI) request for any UFO, or UFO–like, reports submitted to ASA by flight crews, with the date range of 2008 to 2015. I published the results of that effort in January, 2015, and my findings can be looked at here. Also, as an aside, I have also had the ATSB furnish me with numerous reports of aerial unknowns, and the results of that work can be found here.

In my previous FOI request to ASA, I stipulated they search their “Electronically Submitted Incident Report” (ESIR) database and the newer “Corporate Integrated Reporting and Risk Information System” (CIRRIS) for UFO events dating from 2008 onwards. Of course, one would assume, correctly as it turns out, that pilot–submitted UFO reports go back much further than that. The reason for me not asking for all material dating back to, say, the 1980’s, is because an FOI requestor can be knocked back if their request is to broad, or, will cause an unacceptable burden for administrative staff. So, one often breaks these requests for data up into smaller date range blocks. Needless to say, as soon as the last FOI request was furnished, I submitted another one. On the 30th of January, 2015 I submitted a new FOI request to ASA for all UFO or UFO–like cases dated between 1992 and 2008. Specifically, my request stated:

“….any incidences where flight crews have reported any: 1) Unusual, Unknown, or Unidentifiable Aircraft or Objects; 2) Suspected Drones/Unmanned Aerial Vehicles; 3) Meteoric events, fireballs and the like; and, 4) Especially unusual weather phenomenon; which are held on the Electronically Submitted Incident Report (ESIR) database or the “Corporate Integrated Reporting and Risk Information System” (CIRRIS) database.”

On the 18th of February, 2015 Sasha Pesic, ASA’s Freedom of Information & Privacy Contact Officer/Legal Inquiries Coordinator, asked me if I would grant them an extension of time in searching their database(s) and preparing any found material, which, despite not being famous for my patience, I agreed to. On the 7 May, 2015, I received the results of my request. At one page, in PDF form, ASA supplied me with 3 UFO or related events in table form, which is imaged below.

One case stands out. In June, 1999 two airplanes experienced what, by anyone’s measure, must be considered a potentially important UFO event. In ASA’s “Executive Summary” column it is dryly stated:

“Pilots of AJP and AJK enroute for Alice Springs sighted an unidentified green object in their vicinity. No details of any other traffic held by Brisbane Sector 11.”

In the “Description” column it is stated:

The document in question is imaged below. 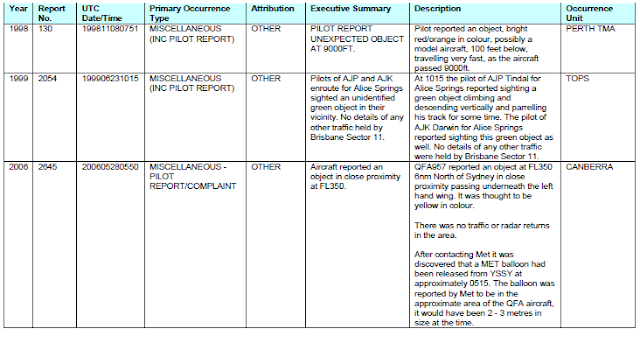 While lacking further narrative, there is enough here to demonstrate that flights AJP and AJK saw something worth reporting, and the incident occurred at a significant altitude, as we shall see. Obviously, it is one thing for a single flight crew to report a UFO event. But when two flight crews report the same thing, the story is much hard to brush aside. If equal importance is the data which also comes with the report. The UTC Date/Time data is listed as “199906231015”, which is Coordinated Universal Time (the old Greenwich Mean Time), translates as the year 1999, on the 23erd of June, at 10:15am. As the event occurred while both aircraft were enroute to Alice Springs, flying from the north, this equates to 1945hrs in central Australia, or, 7:45pm. The event occurred in the “TOPS” airspace sector of Australia, which is a volume of airspace located in the Northern Territory (NT). The “Primary Occurrence Type” is listed as “MISCELLANEOUS”, with a further comment stating “(INC PILOT REPORT)”, which one presumes means the event included a pilot(s) report. The “Attribution” of the case is listed as “OTHER”. Finally, the “Report No” is listed as “2054”.

At that time the sky is quite dark, so, one may presume that any object that is be described as “green” was almost definitely luminous. As for the planes involved I have ascertained, through Australian aircraft registration records, that both  were Westwind IAI 1124 business jets built by Israeli Aircraft Industries. These impressive aircraft carry two crew, and operate at a maximum speed of 865 kilometres per hour at 29,000 feet, but cruise at 725km/hr at 39–41,000 feet on long flights. Seeing as the Executive Summary states “Pilots of AJP and AJK enroute for Alice Springs...”, there is every chance that the aircraft were travelling at a fairly high velocity, and an altitude of over 29,000 feet.

Whatever the speed, wherever the exact locale, even the admittedly limited data presented in this single ASA document does raises some questions. Firstly, what  “green object” can seemingly dip up and down vertically in the atmosphere, and then track with a jet “...for some time”? We can’t rule out another aircraft, but some of the details given make this rather unlikely. The mystery flight would need to be carrying a very singular bright green light aboard, which breaches civil aviation requirements. Also, one could speculate that the crew of either AJP and AJK would have attempted communication with other flights in the region, and if they did there was obviously no positive response.  Most importantly, the “Description” section clearly states that “No details of any other traffic were held by Brisbane Sector 11.”. In Australia, the Brisbane Sector monitors and controls all air traffic in the TOPS area, so ASA’s Brisbane Sector effectively admitted that nothing else was flying in the area. Other explanations may fit, but the case is eighteen years old, so investigation is not easy. One could safely assume that the crew’s of the two aircraft in question have long moved on. Moreover, military records dedicated to, for example, ground–to–air missile evaluation launches are almost impossible to obtain, even through significant FOI work. Quite simply, the details of high–end ordinance tests are classified in Australia, as one would expect. Other solutions, including a gigantic period of meteoric activity, long–duration space re–entries, reflections on windscreens, intense hallucinations, rare electrical activity, etc can be ruled out. The astronomical angle is worth studying, but to conclusively blame a planet or star for “...climbing and descending vertically...”, then tracking one of the two flights, pushes the limits of credulity.

In regard to the release of this document, it is worth noting that ASA had a previous opportunity to make public the case. As I have detailed, my FOI request was finalised in Feburary, 2015. However, three years earlier, Australian researcher Keith Basterfield asked ASA for any information held regarding UFO’s, and the material I have presented in this report, which dates back to 1999, was not released. Specifically, on the 30th of May, 2012, Basterfield submitted an FOI request to ASA for:

“…any documents held by Air Services Australia, on the subject of ‘unidentified flying objects’.”

On the 18th of June, 2012, Keith was furnished with internal ASA material containing a number of media enquiries to ASA’s Public Affair’s desk, and a number of general enquiries from the public. Nothing of note was unearthed. Technically, of course, Basterfield had asked for records regarding “unidentified flying objects”, and the event I have highlighted was listed as an “unidentified green object”, with the “Primary Occurrence Type” listed as “MISCELLANEOUS”, and the “Attribution” listed as “OTHER”. These details do not contain the specific term ”unidentified flying objects”, which is what Basterfield had based his FOI request on, so the failure to release him anything of note probably boils down to a terminology issue. Usually, FOI staffers will do little more than process the request using exactly what a requestor has asked about, but surely a search of the ESIR and CIRRIS databases for the terms “unidentified” and “object” should have come up with the Alice Springs AJP and AJK event. Whatever the parameters, or limitations, of ASA record searching are, one can’t help but wonder if further requests, using a whole list of other keywords, would pick up. We may not have to wait long. I aim, very soon, to formulate a new FOI request to ASA. It will include a more robust and wider scope than anything I have done previously.
Posted by Paul Dean at 01:59