From The Royal Australian Air Force

On the 27th of July, 2014, I obtained, under the Freedom of Information Act (FOIA), two formerly classified Royal Australian Air Force (RAAF) publications which are currently maintained by 41 Wing and detail the processes and procedures that should be adhered to when RAAF assets detect and track an unknown aircraft, a known aircraft which has strayed of course, hostile aircraft, or anything else untoward. The two publications are titled “RAAF 41 Wing Standing Instruction (Operations) 3-19 Contact Of Interest Reporting Process” and “RAAF 41 Wing Standing Instruction (Operations) 3-15 Unauthorised Aircraft Movements Reporting and Investigation Process”. The details of this affair, and the information contained in one of those publications, can be seen here.

On the 5th of November, 2015 I submitted my most complex FOI request yet. Through the good old Defence FOI branch, or, to be accurate, the Freedom of Information Branch, Ministerial and Executive Coordination and Communication Division, Department of Defence. Essentially, I asked for any unusual radar plots that had been picked up by the RAAF that did not conform to known aircraft. Specifically, I wrote:

1. Any “Contact(s) Of Interest” (COI) reports or events, as laid out in RAAF 41 Wing “Standing Instruction (Operations) 3-19 Contact Of Interest Reporting Process”, which remained unsolved or unknown.

NOTE: Essentially, I am looking for the events where (aside from being reported, recorded and logged) RAAF 41 Wing has tracked a contact which was either out-of-place, went unsolved upon investigation, or behaved in an unusual manner.
After some hoopla regarding the “date range” of the material I wanted, Defence FOI and I agreed to restrict my request to a date range of my choosing, but not longer than a month or so. I randomly picked the month of July, 2014. After some time Defence FOI agreed that my request was valid and proceeded to send me the initial bill. On the 16th of Feburary, 2015, I received a final decision, along with four pages of RAAF material which were applicable to what I had requested. In Defence’s decision letter, it was stated that:

“Group Captain Wallis has decided to partially release the material with deletions made in accordance with subsection 22(1) [Access to edited copies with exempt or irrelevant matter deleted] of the FOI Act, on the grounds that the deleted material is considered exempt under section 47E [public interest conditional exemptions-certain operations of agency] of the FOI Act.”

“Upon examination of the document, Group Captain Wallis identified information relating to the conduct of operations within units and elements of No 41 Wing. Group Captain Wallis considered the disclosure of this material might reasonably have a substantial adverse effect on the proper and efficient conduct of the operations of this agency. Group Captain Wallis advised that she took into account the expected effect of disclosing the material considered exempt under section 47E. Group Captain Wallis advised that if released, the material would or could reasonably be expected to cause damage to the operations of the Commonwealth as the data refers to real operational performance and outputs. She was of the view that that once the information was made publically available (ie published on the FOI Disclosure Log) it could be used by individuals to circumvent Defence’s detection procedures and enter or leave Australian Sovereign Territory airspace without clearance or detection.”

In other words, the material I was looking for was going to be heavily redacted, or “blacked out”. That was the bad news…  The good news was that there was indeed still enough material here to learn something about the way the RAAF handles unusual, unknown or out-of-place contacts. It may not look like much, but beggars can’t be choosers. Below are two of the four pages I how hold: 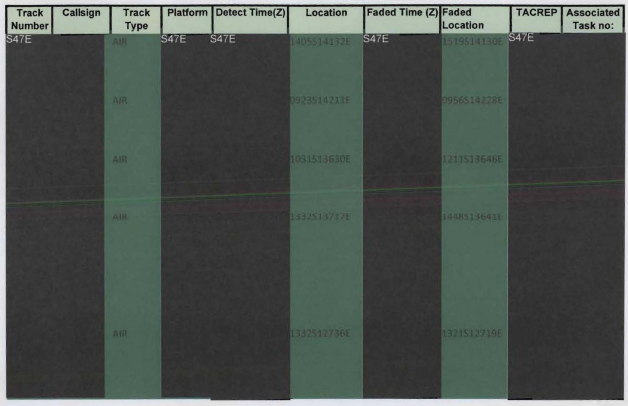 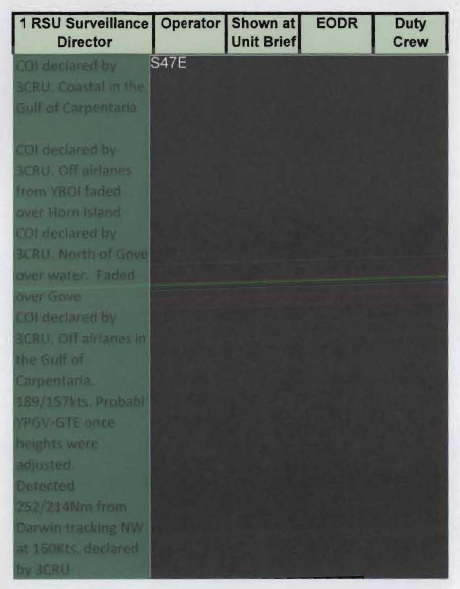 It may look all very unassuming, but imaged above is actual data as logged on 41 Wing systems (both the 1RSU unit and the 3CRU units) detailing unusual or unknown events that were serious enough to be monitored, and probably sent to higher authorities. Of course, there is so little here to work with in regards to making sense of the raw data, and certainly nothing that could point to any really unusual events of the startling sort we all are looking for as UFO researchers. But those events - where primary targets have ran rings around combat jets and the like - have from time-to-time, been admitted to by Air Defence units the world over. I still have not studied the material sent to me yet in enough depth to formulate new FOI requests which may yield more impressive information. But, and I can assure you, I will be.
Posted by Paul Dean at 01:24