About a year ago, I took the plunge and begun the near-impossible task of ascertaining what role joint US/Canadian North American Aerospace Defence Command (NORAD) has maintained regarding the UFO matter. Sure enough, just as I had suspected, there is a paper trail dating back decades, and much of it makes for rather awkward reading. Furthermore, I have been working with David Charmichael, a brilliant British citizen who has been aggressively asking NORAD, and its parent agency Northern Command (NORTHCOM), one of ten Unified Combatant Commands organised directly under the Secretary of Defence and Joint Chiefs of Staff, for some honest answers regarding the oddities they track on vast radar systems, and other UFO-related matters. Together he and I have discovered much.

For those that don’t know, NORAD, as its current Fact Sheet states, is:

“...charged with the missions of aerospace warning and aerospace control for North America. Aerospace warning includes the detection, validation, and warning of attack against North America whether by aircraft, missiles, or space vehicles, through mutual support arrangements with other commands. Aerospace control includes ensuring air sovereignty and air defence of the airspace of Canada and the United States.”.

Put simply, NORAD uses myriad primary and secondary radars to build up an integrated, recognised air and aerospace picture, even out into sub-space, of what is flying around above the USA and Canada. NORAD has generally maintained that the only “UFOs” they detect and track are simply strayed aircraft, hostile formations of Russian combat aircraft and such. NORAD do not have any interest, or, any knowledge, of  our sort of “UFO” events.

Unfortunately for NORAD, however, if one goes by what the contents of their own declassified paperwork says, the overwhelming evidence is that they have not been honest, and this dishonesty has been going on since the 1950’s. But first, let’s see what official concoctions NORAD has come up with over the long years.

“…this command has no present activity in investigating UFOs, nor does any area of the United States government that I’m aware of.”

“We do not undertake investigative measures… …our interests are satisfied in near real time, and no formal documentation is created by this command.”.

The address given was that of the Mutual UFO Network (MUFON), a civilian organisation. This reply letter is imaged below. 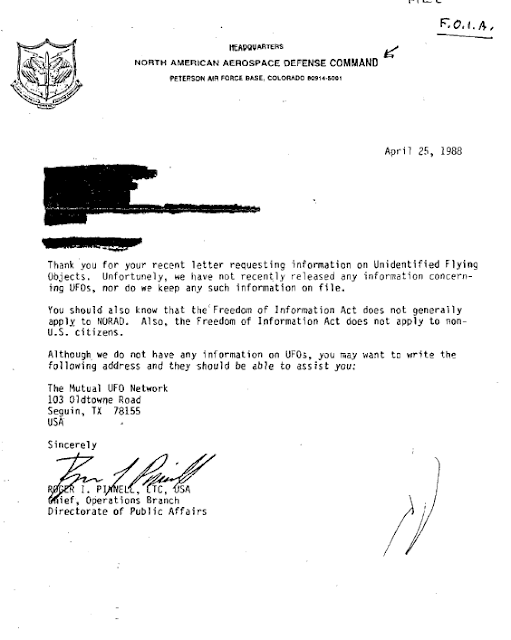 These official statements may sound legitimate at face value, but, in fact, they fly in the face of various documents begrudgingly released by the US military over five long decades.

Since 1954, the “Joint Army Navy Air Force Publication 146” (JANAP 146) procedures, promulgated by the Joint Chiefs of Staff, have issued a series of “Communications Instructions for Reporting Vital Intelligence Sightings”, more commonly referred to as simply “CIRVIS”. The timely reporting of UFO’s by military and civilian pilots, as well as other professionals, is clearly laid down in these CIRVIS procedures, and, first on the addressing distribution list is none other than the Commander-in-Chief, NORAD (CINCNORAD). For example, the February 1959 version of JANAP CIRVIS procedures, published as JANAP 146(D), states, in part, under the “Information to be Reported and When to Report” section on Page 8:

Note, that “Unidentified Flying Objects” is listed as distinct from single aircraft, formations of aircraft, missiles, etc. Below is an image of this page from JANAP 146(D) CIRVIS. 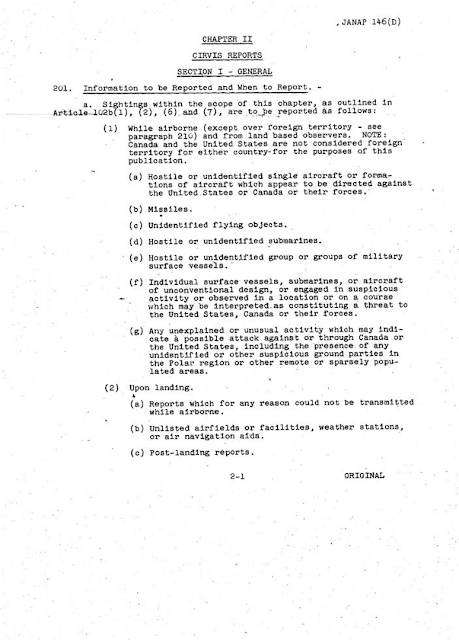 Of even more interest are these two procedural statements, on Page 12:


“c. A post-landing report is desired immediately after landing by CINCNORAD or RCAF-ADC to amplify the airborne report(s).”

CINCNORAD is merely Commander-in-Chief, NORAD, and, RCAF-ADC is Royal Canadian Air Force, Air Defence Command. Below is an image of the page. 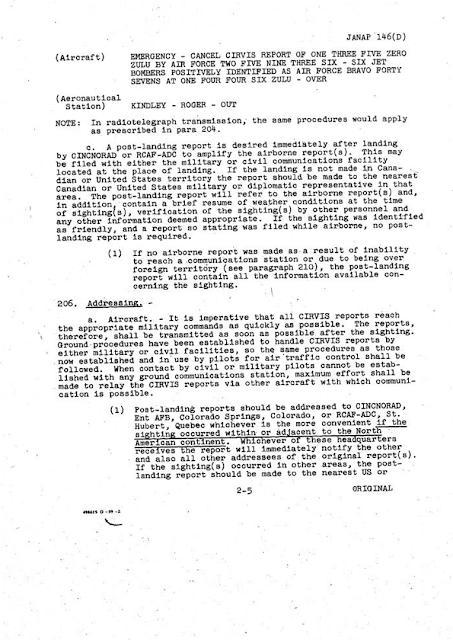 Thus it is established that NORAD, even so long ago, was very much concerning itself with serious UFO sightings made by US or Canadian forces, and any claims to the contrary are absolute nonsense. Years later, nothing has changed.

The 2008 “Air Force Instruction 10-206 Operational Reporting” instruction contains the second most current CIRVIS sightings procedures, which still include “Unidentified Flying Objects” as separate from aircraft, missiles, etc. On Page 36, it is stated, with regards to the addressee of such “vital” reports:

So much for NORAD not being in the US military’s “UFO loop”. 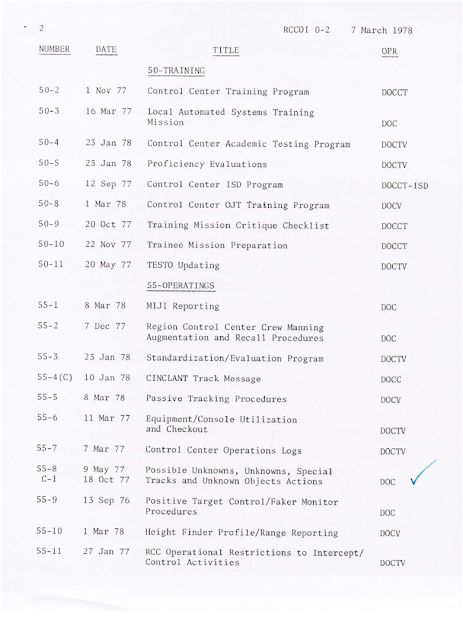 There a numerous such NORAD indexes that contain references to classified publications, and through diligent research, some of these publications have been released. The above mentioned 20th NR instruction contains a section, on Page 6, titled “Unknown Objects”, and states, in part:

This makes very clear that “unknown objects” are of concern to NORAD, despite what the United States government has ceaselessly said to the public. The page in question is imaged below. 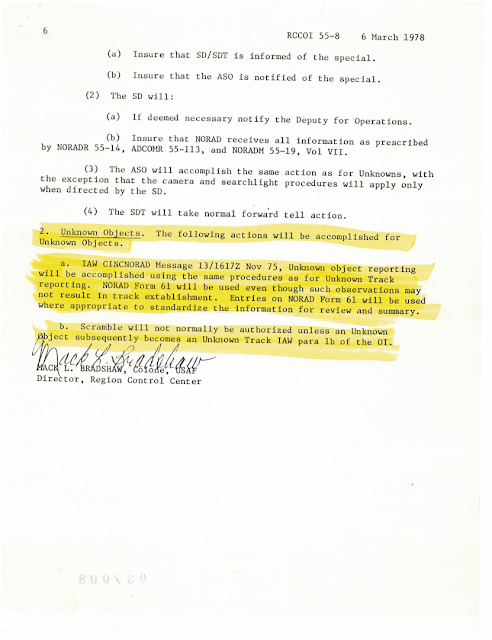 While these procedural and instructional records are very significant, there is far more material which catches NORAD out red-handed being involved with localized and serious UFO events. In my next post, Part 2 of this series, I will be highlighting such material which provides ample evidence that NORAD know far more about the UFO issue than they are prepared to discuss.