Continuing on from my Part 1 of my series, titled “NORAD And The UFO Smokescreen” I will carry on presenting evidence, in the form of declassified documents, that the North American Aerospace Defence Command (NORAD) has been heavily involved in significant, inexplicable and unexplainable UFO events since its formation in 1957. Even when given the opportunity to disclose UFO case and study records to the flawed the University of Colorado’s “UFO Study” (the US Air Force’s final word on the UFO matter in 1969), NORAD managed to stay nearly silent on the matter despite evidence they were sitting on vital, even startling information. I am not attempting here to analysis the actual cases as such. This would not be the appropriate platform to do so, and, much work has been done of these events already. What I am attempting to do is prove NORAD, like so many other agencies, have not been truthful, which is getting seemingly easier every day.

Take, for example, a 10th of April, 1964 information relay message found in the US Air Force’s (USAF) Project Blue Book records. The document highlights and summarises the contents of previous information moving around US Air Force Headquarters (USAF/HQ), USAF Air Staff, and the National Military Command Center (NMCC). In the subject line there are three very familiar words: “Unidentified Flying Objects”. Under this, two pieces of sectioned information state:

“NMCC, NORAD advised that there were 6 to 12 unidentified flying objects at 30 miles East of Merced, California. Radar picked up 12 objects at altitudes 60,000 ft., 90,000 ft., and higher elevations. F-106’s were scrambled at Castle Air Force Base. There were no results because of high altitudes. They are checking the possibility of sending U-2’s.”

“Objects were following a 60 mile race-track pattern. F-106’s were flying a 90,000 ft. altitude. Pilots locked on to some of the objects but could not keep the lock. NORAD said they were sending 2 more XXXXX aircraft with pilots in pressure suits.”

The case was later dismissed by the USAF as one mere weather balloon. Whether that conclusion is accurate has been debated ad nauseam, but for the purposes of my study it is interesting to note that NORAD is mentioned not once, but twice, in the message text. Specifically, “NMCC, NORAD advised that there were 6 to 12 unidentified flying objects...” and “NORAD said they were sending 2 more XXXXX aircraft with pilots in pressure suits.”. So, for NORAD to state – as they did throughout the 1960’s and 1970’s – that they had no interest or “records held” relating to unidentified flying objects is clearly deceptive. Below is an image of this record. 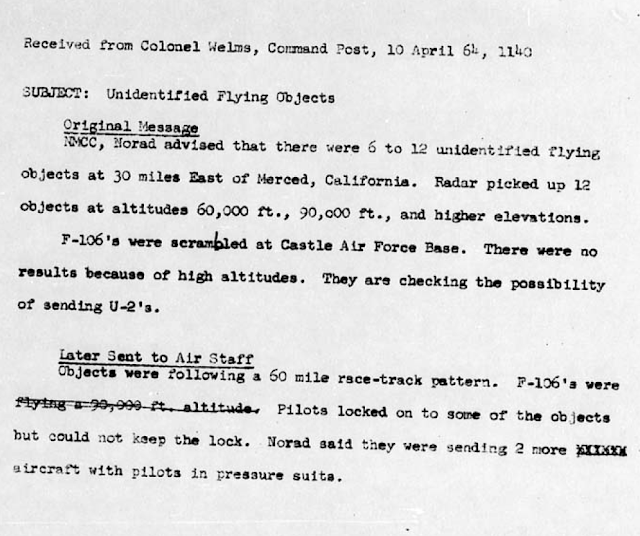 Another record, dated September 10, 1972, and sent from 22 NORAD Region Headquarters, (22NRHQ) North Bay, Ontario, Canada to both the Canadian Forces Headquarters (CFHQ) and the National Research Council (NRC) is an unclassified telex discovered in the Canadian Archives, along with dozens of others like it. It details an object seen visually, and, tracked on radar by two tower operators at North Bay Airport, which is connected to Canada’s NORAD Operations Headquarters. Described visually as “one object flashing red and green lights, speed very slow to 300 knots at 4000 to 6000 feet estimated”, the report then gives the following further  description:

Below is an image of the telex. 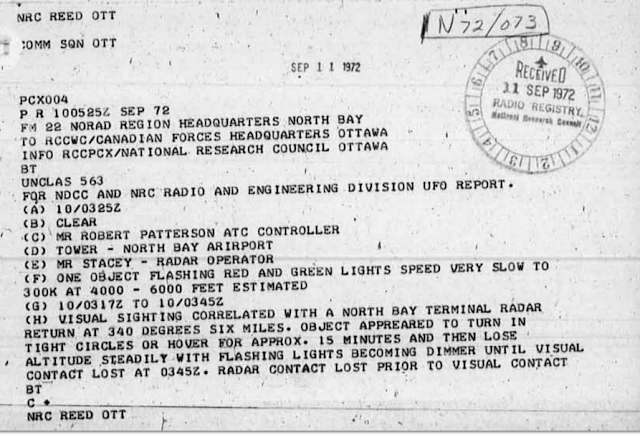 Aside from the obvious fact that NORAD, again, is mentioned in what can only be described as some sort of UFO event, two interesting issues are raised here. Firstly, the message reads “UNLCAS” in the security classification line – meaning “unclassified”. In other words, the contents of the message are not security or intelligence sensitive. From this, one can’t help but wonder what sort of material is held in NORAD records which are classified. Apparently there are many. Secondly, it is interesting to note that the telex was sent from NORAD, not to NORAD – further rubbishing the assertions that they have not one scrap of interest in odd aerial incidents.

In another Canadian telex, again sent from 22NRHQ to the CFHQ and NRC, dated 4th July, 1972, states that Captain Sorefleet and Captain Drury, stationed at Canadian Forces Base Bagotville, Quebec, reported one “white oval” while flying in a fighter jet at 35,000 feet. The description indicates a “small red tail”. This, of course, could be a meteor sighting. However, the telex finally states “observed for 2 minutes about 40 miles”. Whatever the object was, it was clearly unidentifiable enough that the pilots wished to report it, and NORAD was part of that process. The page is imaged below. 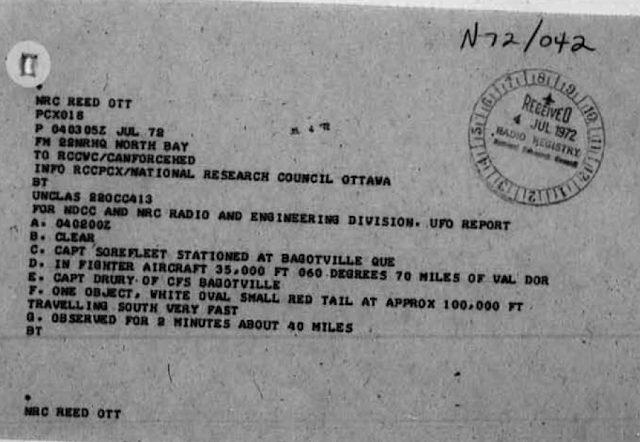 These events occurred in 1972, only 2 years after the Secretary of the USAF, Dr. Robert C. Seamans, Jr, famously announced, on the 17th of December, 1969, that no US military agency will continue the reporting, or receiving of reports, of UFO events, and, that:

But did the US Department of Defence – especially the commands dealing with air defence and air warfare – really accept this? Do we have any evidence that the above statement is complete rubbish barely fit for the trash bin?

Who’s Got Their Stories Straight At Air Force Headquarters This Week?

In 1979, researcher Robert Todd had the USAF release some of the documents related to the closure of Project Blue Book – the USAF’s 17 year study (one of three such study’s) into the UFO phenomenon. One of the documents was a 20th October, 1969 memo known as the “Bolender Memo”. Signed by Brigadier General Carrol H. Bolender, who was the Deputy Director of Development, for the Deputy Chief of Staff for Research and Development, at USAF Headquaters, the second page of the memo contains two passages which depart radically from the USAF’s above mentioned statement that no UFO event reported or investigated was a threat to national security. Those passages are:

“Moreover, reports of unidentified flying objects which could affect national security are made in accordance with JANAP 146 or Air Force Manual 55-11, and are not part of the Blue Book system.”

“However, as already stated, reports of UFOs which could affect national security would continue to be handled through the standard Air Force procedures designed for this purpose.”

Below is an image of the page in question. 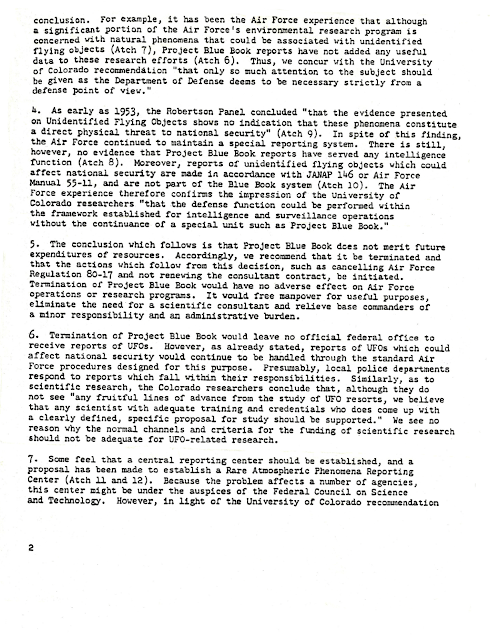 The Bolender Memo, quite simply, admits that some UFO reports can, and do affect national security. This flies in the face of what the public were being told. Also, the memo indicates that Project Blue Book was never supposed to receive the most alarming, security-vital UFO reports, and, specifically, such reports were being made using the “Joint Army Navy Air Force Publication 146(E)” (JANAP 146E) system or “Air Force Manual 55-11” (AFM 55-11). In fact, at this time Project Blue Book, and the University of Colorado’s flawed “UFO Study”, was only receiving reports filed using “Air Force Regulation 80-17” (AFR 80-17). This raises awkward questions. For example, if Project Blue Book staff were not getting a chance to evaluate the most sensitive UFO reports submitted by USAF airmen and other military professionals, then who was? As I highlighted in my Part 1 of this series, the USAF and NORAD were in fact at the receiving end of UFO reports made using JANAP 146E’s “Communication Instructions for Reporting Vital Intelligence Sightings” (CIRVIS) procedures. UFO reports made using AFM 55-11, using the “Air Force Operational Reporting System” (AFOREP), were likely occurring too.

America’s political leaders have not been told about all this, even when they have asked specific questions. In a reply letter to Senator Patty Murray, dated August 25, 1993, Lieutenant Colonel Thomas Shubert, USAF, stated:

“As information, the Air force began investigating UFOs in 1948 under a program called Project Sign. Later, the program's name was changed to Project Grudge and, in 1953, it became known as Project Blue Book. On December 17, 1969, the Secretary of the Air Force announced the termination of Project Blue Book... ...As a result of these investigations, studies, and experience, the conclusions of Project Blue book were: 1)  no UFO reported, investigated and evaluated by the Air Force has ever given any indication of threat to our national security…”

Again, compare this with the contents of the Bolender Memo: “…reports of unidentified flying objects which could affect national security are made in accordance with JANAP 146 or Air Force Manual 55-11, and are not part of the Blue Book system.”. Since the public and Congress did not, and do not, know about this JANAP 146 and AFM 55-11 business, the impression can be easily given, as it was to Senator Murray, that the USAF had then, and have now, no reason to take whatsoever the UFO matter seriously. Below is an image of the USAF letter to Patty Murray. 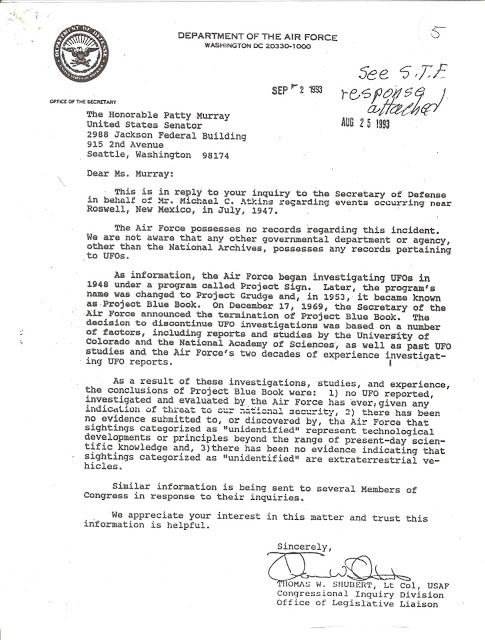 The above examples are only a handful of quite contradictory pieces of information that have managed to find their way out of NORAD, and the wider US military. I have countless more on file. Thousands. Why are we consistently finding that the press, the public, and even politicians were, and still are now, told one thing, but, in classified documents, meant for very restricted readership, the exact opposite is stated? Recently, retired USAF Colonel Charles Halt, who was Deputy Base Commander of the Bentwaters Air Force Base during the famous Rendlesham Forest event, stated:

“I’ve heard many people say that it’s time for the government to appoint an agency to investigate. Folks, there is an agency, a very close-held, compartmentalized agency that’s been investigating this for years, and there’s a very active role played by many of our intelligence agencies that probably don’t even know the details of what happens once they collect the data and forward it. It’s kind of scary, isn’t it?”

Should we brush these sort of comments aside? Maybe not. He may just be confirming what government documents have been telling us all along. In Part 3 of this series I will go deeper into NORAD’s relationship with the UFO issue.
Posted by Paul Dean at 02:10