Some time ago I accepted a request to do a cold case study of a mass witness UFO sighting that occurred in New Zealand in 1970. It started around 2:15pm on the 7th of May, very near the town of Napier. That should narrow things down a bit if anyone has some memory of it, or, some actual records. Likely, someone must remember something significant. Either way, whatever actually occurred, the case lit up the Napier Daily Telegraph on the 8th of May – just a day after the impressive event – with this headline: “Mystery sky object seen by teachers and 400 children”. I’ll let readers appraise the article themselves. 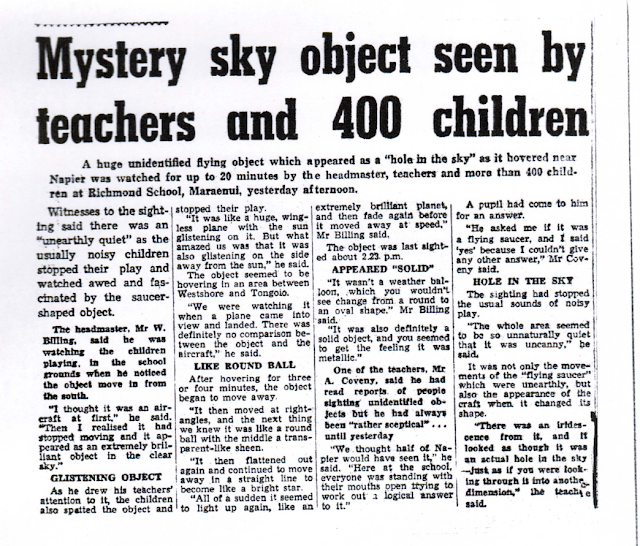 Further, for easy reading, I have transcribed the article below. The catch-line under the heading reads:

“A huge unidentified flying object which appeared as a “hole in the sky” as it hovered near Napier was watched for up to 20 minutes by the headmaster, teachers and more than 400 children at Richmond School, Maraenui, yesterday afternoon.”

..And then we get into the guts of it:

“Witnesses to the sighting said there was an “unearthly quiet” as the usually noisy children stopped their play and watched awed and fascinated by the saucer shaped object. The headmaster, Mr. W. Billing, said he was watching the children playing in the school grounds when he noticed the object move in from the south. “I thought it was an aircraft at first”, he said. “Then I realised it had stopped moving and it appeared as an extremely brilliant object in the clear sky.”.”

From there, a mini-sub-heading line keep us engaged with: “GLISTENING OBJECT”, then the article continues:

“As he drew his teachers’ attention to it, the children also spotted the object and stopped their play. “It was like a huge, wingless plane with the sun glistening on it. But what amazed us was that it was also glistening on the side away from the sun” he said. The object seemed to be hovering in an area between Westshore and Tongoio. “We were watching it when a plane came into view and landed. There was definitely no comparison between the object and the aircraft.” he said.”

The next sub-heading reads, “LIKE ROUND BALL” and keeps the article going:

“After hovering for three or four minutes, the object began to move away. “It then moved at ring-angles, and the next thing we knew it was like a round ball with the middle a transparent-like sheen.” “It then flattened out again and continued to move away in a straight lune to become like a bright star.” “All of a sudden it seems to light up again, like an extremely brilliant planet, and then fade again before it moved away at speed,” Mr Billing said. The object was last sighted about 2:23pm.”

Yet another mini-sub-heading reads, “APPEARED SOLID”. The article continues:

“It wasn’t a weather balloon, which you wouldn’t see change from a round to an oval shape,” Mr. Billing said. “It was also definitely a solid object, and you seemed to get the feeling it was metallic.” One of the teachers, Mr. A. Coveny, said he had read reports of people sighting unidentified objects but he had always been “rather sceptical”… until yesterday. “We thought half of Napier would have seen it” he said. “Here at the school, everyone was standing with their mouths open trying to work out a logical answer to it.” A pupil had come to him for an answer. “He asked me if it was a flying saucer and I said “yes” because I couldn’t give any other answer,” Mr. Coveny said.”

The final sub-heading in the article reads “HOLE IN THE SKY”, and continues with:

“The sighting had stopped the usual sounds of noisy play.” “The whole area seemed to be so unnaturally quiet that it was uncanny”, he said. It was not only the movements of the “flying saucer” which were unearthly, but also the appearance of the craft when it changed shape. “There was an iridescence from it, and it looked as though it was an actual hole in the sky – just as if you were looking through it into another dimension” the teacher said.”

On the continuing page of the newspaper, there was even a picture. I would normally be ashamed to publish something so poorly imaged, and I will be obtaining a better copy, but for now it is all I have. 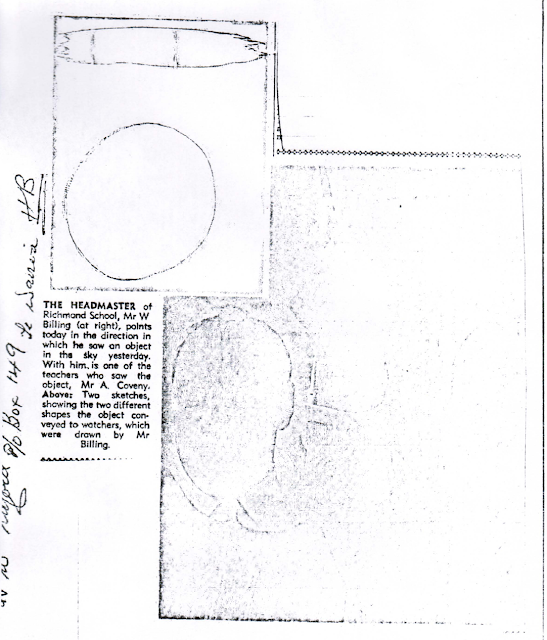 Luckily the caption is clear, and it reads:

“THE HEADMASTER of Richmond School, Mr W. Billing (at right), points today in the direction in which he saw an object in the sky yesterday. With him is one of the teachers who saw the object, Mr. A. Coveny. Above: Two sketches, showing the two different shapes the object conveyed to watchers, which were drawn by Mr. Billing.”

Other than two similar newspaper articles with similar, but less detailed, accounts of the sighting, this is all I have... All except these two drawings neatly placed on the one page by either the school teachers themselves, or by interested parties thereafter. Bryan Dickenson has kindly supplied me with this image from his files. 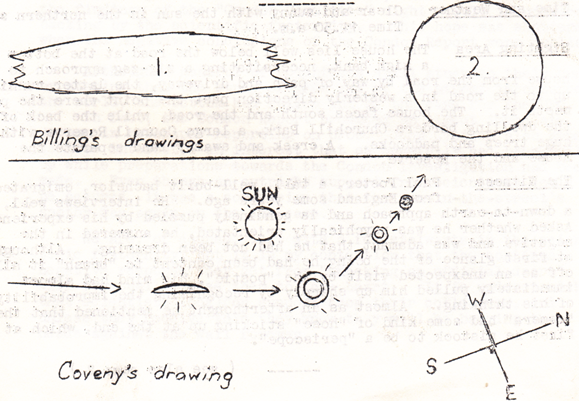 If anyone knows more about this case, such as the whereabouts of the teachers, or whether the Royal New Zealand Air Force was asked for comment, or if it was explained somehow, I would like to hear from you.
Posted by Paul Dean at 04:33