A rather extraordinary document, sourced from the in the Dr. Edward U. Condon Collection at The American Philosophical Society in Philadelphia, has come to my attention. It’s a page from the “trip notes” written by members of Dr. Condon’s UFO Study team. While visiting Kirtland Air Force Base in mid-Feburary, 1968, some of Dr. Condon's team members met with, we assume, aerospace and missile experts, and discussed the recent and alarming nuclear missile shutdowns at Malmstrom Air Force Base that occurred less than a year before. We all know the detailed stories, and there exist enough United States Air Force (USAF) and other ’agencies documents to be sure something odd was going on. Little of this has been admitted by the USAF, but they may want to rethink that stance one day, when more documents leak out. Not unlike the document below. Under the heading “KIRTLAND AIR FORCE BASE” it is dryly stated:

“Checked classified aspects of electromagnetic effects possibly associated with UFO sightings near a Minuteman missile base. Notes results of the discussion were inconclusive, in that it cannot be ruled out that UFOs were the cause of the effects observed at the base. Nothing more can, within security limitations, be said.”

There are a number of very important aspects to this. Firstly, note the use of the word “sightings”, not “sighting”. That means that more than one missile shutdown event was discussed, or, that only one event was discussed, but was confirmed by multiple people or systems in situ. Secondly, there is the admission that it “…cannot be ruled out that UFOs were the cause of the effects…”. Thirdly, more was discussed, but nothing of it was to be put on paper, or, word verbatim “Nothing more can, within security limitations, be said.”.

That’s a lot of punch on half a page of notes. I have yet to study this further, and more will be coming soon. On another note, I discovered this while digging deeply for North American Aerospace Defence Command (NORAD) documents, and, on the same page as this Minuteman missile business, there are trip notes relating to space objects, obviously of the UFOs variety, being conceivably detected on air defence systems. The briefing was conducted at the West Coast Study Facility, which functioned under the old USAF Systems Command (AFSC). Again, like the Kirtland AFB visit, the details of the briefing were classified. A summary was presented, however, which is on the document below. I will be discussing this aspect of things in my continuing series “NORAD And The UFO Smokescreen”.

Below is the above mentioned document. 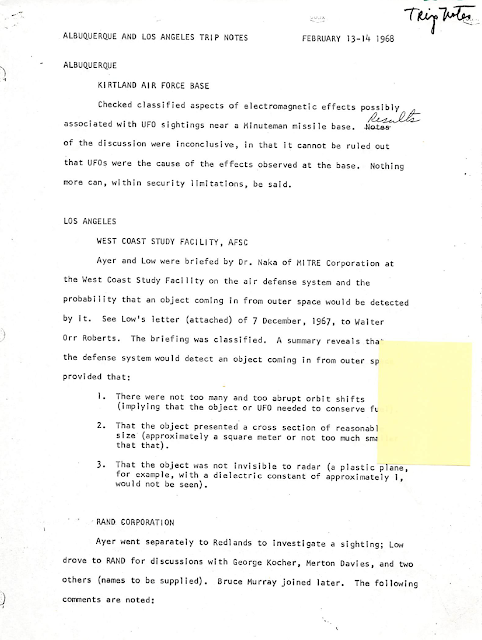