In Part 6 of “NORAD and the UFO Smokescreen”, I introduced the possibility that the North American Aerospace Defence Command (NORAD), as well as other commands and their space components, had ever detected and tracked what we would ultimately called UFO’s outside Earth’s atmosphere. By UFO’s, I, of course, mean unknown and unidentifiable bodies above-and-beyond manmade payloads or debris, and natural, meteoritic material. I established that NORAD is not in direct command and control of space surveillance systems, but relies on incoming data from the United States Strategic Command (STRATCOM) and the component commands who run the vast Space Surveillance Network (SSN) – over thirty electro-optical and radar sensors distributed the world over. I also established that, if UFO’s do in fact exist, that NORAD and the SSN could, even in the 1950’s and 1960’s, have spotted serious UFO’s events – within technical limitations – and that such events would have been classified. Beyond those facts, much of what we know, at least up until the mid-1970’s, is inconclusive, and sometimes just rumor. However, this very large and complicated jigsaw puzzle was becoming clearer.

During this time, a seemingly new set of terminology came into usage. The most tantalizing of those new terms, which is still in use today, is “Uncorrelated Target”, often shortened to “UCT”.

“So many statements have been offered publicly to the affect that astronomers don’t see UFOs or photograph unknown objects that everyone believes them, despite their falsity. The result is that when anomalous images show up on films, the tendency is to eliminate the UFO hypothesis simply by not calling them UFO’s, as NORAD eliminated UFO’s by calling them UCTs (Uncorrelated Targets).”

This is important as Page had been a member of the CIA’s Robertson Panel on UFO’s in 1953. He was one of the more hostile members towards UFO’s, though he later was involved with the American Association for the Advancement of Science’s (AAAS) UFO Symposium in 1969 which much of the established scientific community had resisted. Below is the page in question. 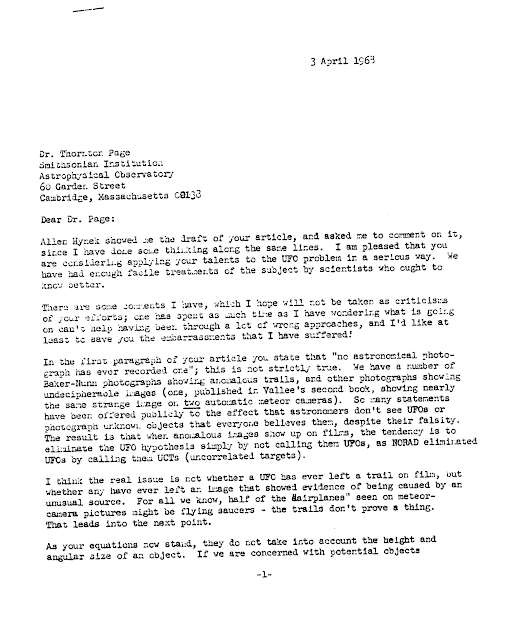 So, what are Uncorrelated Targets? And do they really have anything to do with the UFO phenomenon?

When an SSN detection and tracking site discovers what could be new and/or uncatalogued object in space, it is first given the label “Unknown Observation” (UO). If routine attempts to identify the UO fail, it is quickly “tagged” as an “Uncorrelated Target” (UCT) and further attempts are made to associate it with a previously known object which has moved in space, wrongly tagged by the SSN system, or otherwise lost. Publically available information concerning these capabilities is remarkably myriad. For example, NASA’s 2008 “Handbook For Limiting Orbital Debris” states:

“….the observations on the object come into Space Defense Operations Center (SPADOC) as Uncorrelated Targets (UCTs)… …UCTs may also enter the system from objects which are new to the network. New satellites can arise in a number of ways, the most obvious being a newly launched satellite or from debris related to a launch. Other processing in SPADOC has specific responsibility for identifying these objects and cataloguing them as quickly as possible. But, on occasion, pieces of debris may be missed and this will eventually result in UCTs entering the system. Other sources of UCTs include manoeuvres or orbital separations.”

Openly available information regarding UCTs, like the examples offered above, is extensive. Classified records, however, are regrettably very challenging to obtain. We are doing everything we can, using the Freedom of Information Act (FOIA) and Mandatory Declassification Review (MDR) to pry open hitherto unseen records.

What we do know, though, is very interesting.

Uncorrelated Target data is, with only one special exception, classified SECRET. UCTs are fall into four “categories”, which are: “Nonsignificant ”, “Significant”, “Critical” or “False”. Furthermore, UCTs fall into two “classifications”, which are either “Near Earth” or “Deep Space”. All UCT data is sent from the initial detecting and tracking site to STRATCOM J3 (Operations), the Joint Functional Component Center – Space (JFCC-S) and the Joint Space Operations Center (JSpOC). NORAD too receives UCT data to fulfil its “Integrated Tactical Warning and Attack Assessment” (ITW/AA) mission, which includes missile warning and target prediction. Some UCTs are undergo a process known as “Space Object Identification” (SOI) whereby UCT data is processed with the aim of actually identifying the object. SOI includes the measuring of a UCTs reflective brightness, determining its radar cross section (RCS), and even eavesdropping on any transmission, if manmade. UCT processing focuses on bodies that are in orbit, or reaching orbit, or have ballistic trajectories expected of missile launches. Thus, UFO’s – if one considers the erratic and unpredictable manner they are said to behave – may be difficult for the SSN to verify or assess. Or, the other possibility is that the SSN is far more adaptive and sensitive than what publicly available information says.

How do we know all this? We know, because it can be all found in half a linear foot of military doctrine dating back thirty years.

There exist a number of NORAD, STRATCOM and old US Space Command (SPACECOM) publications which are of great interest. Unfortunately many are classified, and, thus, totally unrealisable, or, releasable only after heavy redaction. My colleague David Carmichael and I are endeavouring to have a significant number of them identified, declassified and released under the Freedom of Information (FOI) Act. Moreover, we are attempting to access current publications as well, which is even more difficult. Despite these barriers, there have been notable successes. Dozens of doctrinal publications – regulations, instructions, directives, guidelines, manuals, handbooks, etc – have been released, if redacted, as we shall see.

The earliest publication we have on record that mentions UCT’s is an obsolete SPACECOM regulation titled “US 55-12 Space Surveillance Network (SSN) Operations”, dated 1st June, 1992. The version I have obtained is heavily redacted, but nevertheless contains information essential to the study of possible UFO detection in space. At a hefty 191 pages and classified SECRET by “multiple sources”, UK researcher Dr. Armen Victorian, also known as Henry Azadehdal, briefly wrote about its contents in 1996 after securing a copy. He was almost certainly the first UFO researcher to see it. I obtained my copy from someone else in the defence intelligence community, but I believe that the copy I have on file is the same as what Victorian acquired. My colleague David Charmichael attempted to get the redacted sections released in early 2015, but he was told by the STRATCOM J006 (FOI) desk that they remain currently and properly classified. The unclassified sections of “US 55-12 Space Surveillance Network (SSN) Operations” are, however, still of interest. The first page of states: 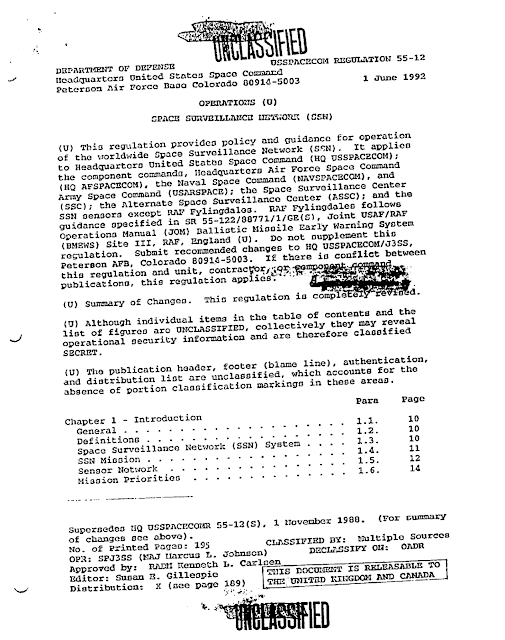 Despite this regulation being nearly twenty-five years old, the most critical segments to our research are precisely the ones that are heavily redacted. Much can be taken away from what is left, however. There are chapters detailing the roles and responsibilities of the various SSN sensors, the breakup of satellites, tracking and impact prediction, tasking procedures, emergency actions, computer system outages, communications security and other technical matters. The rest, though, is a patchwork of redaction. A good example is the first page of Chapter 6, titled “MANEUVERABLE SATELLITES”, speaks for itself, and I have imaged it below. 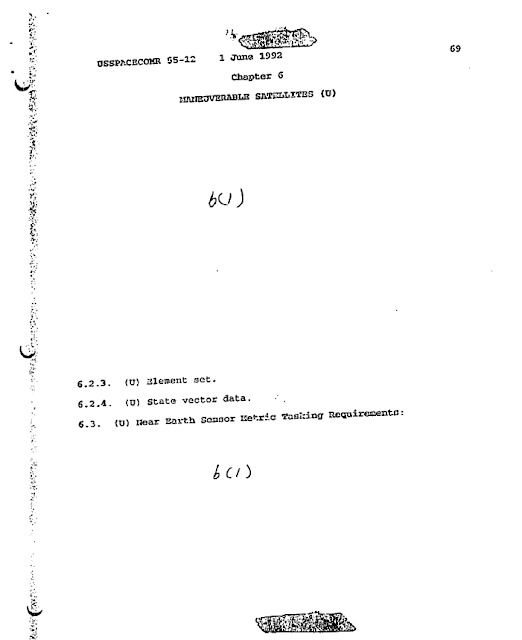 “12.1 (U) General. … The SSN often detects objects on orbit that do not correlate with orbital elements of any catologed objects in the sites databases. These UCTs are important because such objects could be previously undetected or recently maneuvered foreign satellites or missiles with hostile missions…”

Additionally, UCT “Categories” and “Classifications” are laid out:

“12.2. (U) Categories. UCTs are classified into the following categories:

12.2.1. (U) Significant UCT. A UCT with an average RCS 1 square meter or more. Note: Optical sensors consider all UCTs as Significant unless processing a NFL.

12.2.3. (U) Critical UCT. Any UCT which is suspected to be related to a new foreign launch. Specifically, a UCT is “CRITICAL” if it meets one or more of the following criteria:…”

This is where the predictable redactions begin. Four “criteria” are listed, but have been entirely blanked out. Additionally, a fourth category of UCT is listed. A “False UCT” is a system error, interference, and other tracking peculiarities that do not represent a real object in space. The page then continues on with a new sub-section describing “UCT Classification”:

12.3.1. (U) Near Earth. Near earth UCT observations and element sets are UNCLASSIFIED.

Below is an image of this page. 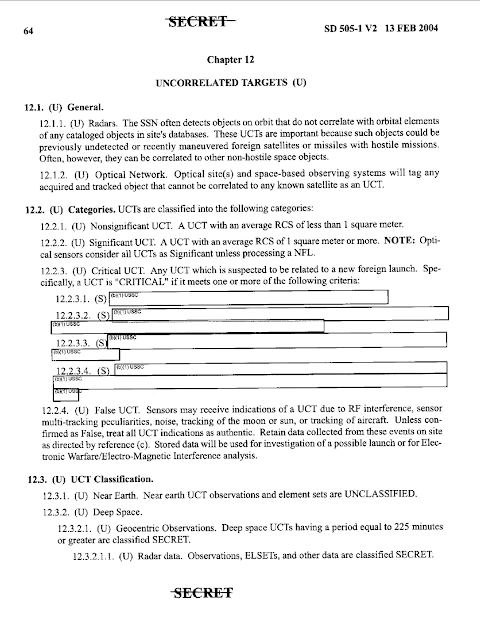 “Copies of any serious UCT event are sent to the Missions Systems Integration Board (MSIB). MSIB is composed of all NORAD and SPACECOM directorates, and senior level representatives from Naval Space Command, Army Space Command and Air Force Space Command.”

Going back to the 1980’s, an obsolete SPACECOM publication titled “Uncorrelated Target Processing Handbook” apparently contains additional information about UCT’s. In 1990, Dr. Armen Victorian and researcher Ray Fowler were told by the SPACECOM Public Affairs Office that the handbook was a 1st Command and Control Squadron (1CACS) publication used for space surveillance tasking and guidance. Fowler, in his 1991 book “The Watchers”, states:

“…the handbook states that the 1st Command and Control Squadron (1CACS) is responsible for processing all UO’s that are reported to Cheyenne Mountain Space Surveillance Center (SCC) from the worldwide Space Surveillance Network (SSN). This includes UCT’s.”

“1CACS is a part of Air Force Space Command (AFSPC) and is collocated with the Space Control Center (SCC). 1CACS performs all routine processing for the SCC”

So there is no doubt that 1CACS was at the forefront of UCT detection and processing, thus obtaining their old records is of utmost importance. Using the FOI Act, we are attempting to access the files of the old 1st Space Wing, which will include 1CACS files, and maybe material from other space surveillance squadrons.

Another 1980’s-era example of NORAD’s role in processing data on unknown objects in, or near, space comes from the dedicated USAF missile and space warning squadrons. One such squadron is the 6th Space Warning Squadron (6SWS), formerly the 6th Missile Warning Squadron (6MWS). The 6SWS is based at Cape Cod Air Force Station, in Massachusetts, uses one of the world’s most powerful Solid State Phased Array Radar (SSPAR) to ceaselessly scan the skies and space over the Atlantic Ocean for sea-launched ballistic missile launches, plus incoming warheads thrown from intercontinental ballistic missiles (ICBM). Complementing that dedicated role, the 6SWS also supports the SSN in near earth space object identification. An obsolete 30th June, 1986 AFSPC regulation titled “AFSPACECOM Regulation 23-36 Organisation and Mission – Field 6 MISSILE WARNING SQUADRON” states, on Page 1:

It is safe to assume that the 6SWS is capable of plotting almost any solid object in its field of view, as long as the size of the object is appreciable. Also clear is that NORAD is in the data loop. Also, note that the “unit also provides surveillance, tracking and limited space object identification (SOI) support for space surveillance operations.”. Whether any truly anomalous UFO events have actually occurred on the screens of the 6SWS is unknown to us. The 6SWS is just one of twenty such space and missile warning squadrons organised within Air Force Space Command (AFSPC). It will be a gigantic task to submit individual FOI requests for detailed information on UFO-type occurrences to all of them; and, as we know, they may not be compelled to release anything substantial. Below is an image of the above mentioned document. 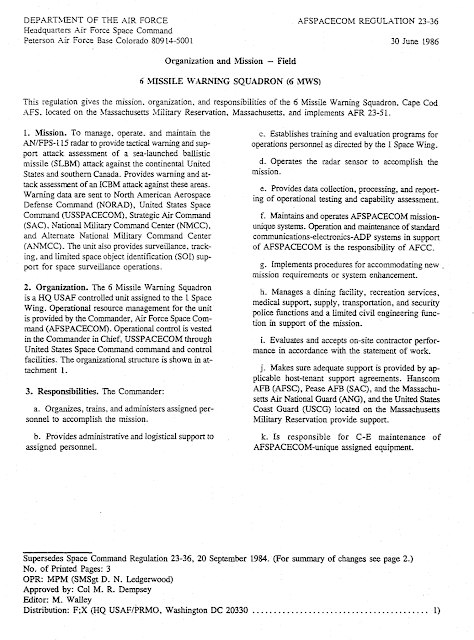 Note that “unknown tracks” and “space object maneuvers” are listed as prime “Operations Loop” telephonic conversation topics for the NORAD and SPACECOM Command Directors. Readers familiar with my earlier work will know that an “unknown track” refers to an unknown, unidentified radar detection and subsequent plotting in the atmosphere. In other words: potential UFO activity. As for “space object maneuvers”, one can only wonder what oddities may have discussed over the years. Below is the aforementioned page. 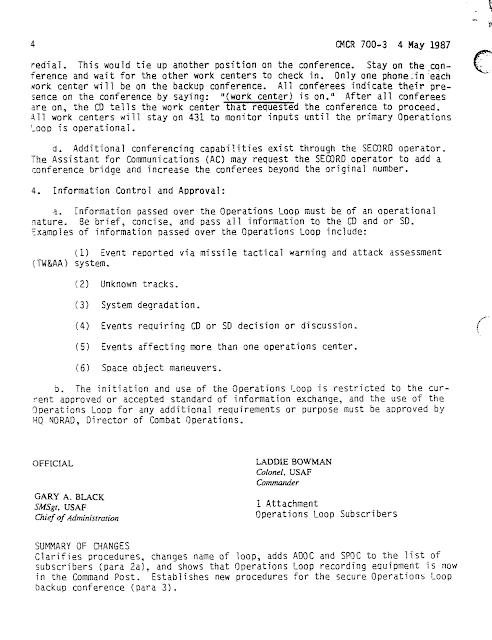 In Part 8 of this series I will be discussing how dedicated UFO researchers in the 1970’s, 1980’s and 1990’s, attempted to obtain actual Uncorrelated Target data.
Posted by Paul Dean at 04:57