Confirming UFO Activity During The Striking Of The

In Part 1 of this series, I discussed the accidental missile strike on the Royal Australian Navy’s (RAN) HMAS Hobart by a United States Air Force (USAF) F–4 Phantom Fighter–Bomber in the early hours of June 17th, 1968. Specifically, I aimed to highlight that there has never really been official confirmation and consensus on what the jet was supposed to be firing on, and, that there was a possibility that the aerial targets it had in its sights were unusual and unidentifiable. The most sensible hypothesis has generally been that North Vietnamese M–14 Hound helicopters were flying in the vicinity of the Hobart, and that the F–4 Phantom made a dreadful targeting error. However, in light of a series of recent discoveries, by both myself and Boston based researcher Barry Greenwood, this may not be the case. I have already gone to considerable length highlighting some never–before–seen information in one particular USAF record, which is titled “Project CHECO South East Asia Report: Air War In The DMZ September 1967 – June 1968”. Again, Part 1 of this series is worth looking at for those who haven’t.

Of course, no serious research project falls back on a single document. Anyone who knows my work will be well aware that I ceaselessly bring forth more, and more, and more, unseen government UFO records to the table. In this Part 2, I aim to present new, or barely known, records which relate to the HMAS Hobart incident. Moreover, there may be, unsurprisingly, a great deal more still–classified records relating to the incident that we simply do not have access to.

An important question which must be asked is that of terminology. Is the use of the term “UFO”, when used in Vietnam–era military records, merely a “catchall” for anything which is airborne and simply unknown to the observer? It would be easy to assume such is the case. However, time and time again we see the term “UFO”, or “Unidentified Flying Object” as distinctly referenced alongside terms like “unidentified aircraft”, “unknown aircraft” and the like.

One of the many examples of this distinction can be found in the individual line items found in a United States Marine Corps (USMC), “Command Chronology” publication, titled “Command Chronology, Headquarters, 3erd Marine Division, 1st Amphibious Tractor Battalion, 1 June, 1968 to 30 June, 1968”. In the “Sequential Listing of Significant Events” section of the document, there are pages of raw, tabulated text which discusses the daily activities of the 3erd Marine Division’s 1st Amphibious Tractor Battalion, in June, 1968. An entry for the 18th of June states:

The very next line item states:

Note the distinction between the terms “unidentified aircraft” and “UFO”? Presumably, military observers would desire to use anything but the term “UFO”, yet we see it used time and time and again throughout all manner of such records.

Another (USMC) “Command Chronology” publication makes reference to ongoing UFO activity in the precise vicinity of where HMAS Hobart was patrolling, and only two nights beforehand. Titled “III Marine Amphibious Force, Air Ground Team, Command Chronology, June 1968”, it was printed by Headquarters, III Marine Amphibious Force, Military Assistance Command on the 9th of August, 1968. Originally classified “SECRET”, and only downgraded to “UNCLASSIFIED” in 2014, it is held, among thousands of similar publications, at the National Archives and Records Administration (NARA) in Washington DC. In a chapter titled “Intelligence”, there is this curious statement on Page 17:

“During the late evening hours of 15 June approximately 15 unidentified aircraft, believed to be enemy helicopters, were reportedly sighted in the DMZ area.  Since that time there have been numerous sightings, both visual and by radar, of unidentified, slow–moving UFO’s in the DMZ area and seaward toward Tiger Island.  No hard evidence of these aircraft has yet been received.”

So, even this USMC historical record – which was authored by utilising raw and classified records – states that “unidentified aircraft” on the 15th of June were only “believed” to be enemy helicopters. Beyond that, “numerous sightings” – seen both visually and on radar – of “unidentified, slow–moving UFO’s” around Tiger Island obviously were of concern. The date–range of these sightings, of course, lead right up to the accidental missile strike on HMAS Hobart. I have imaged the page below. 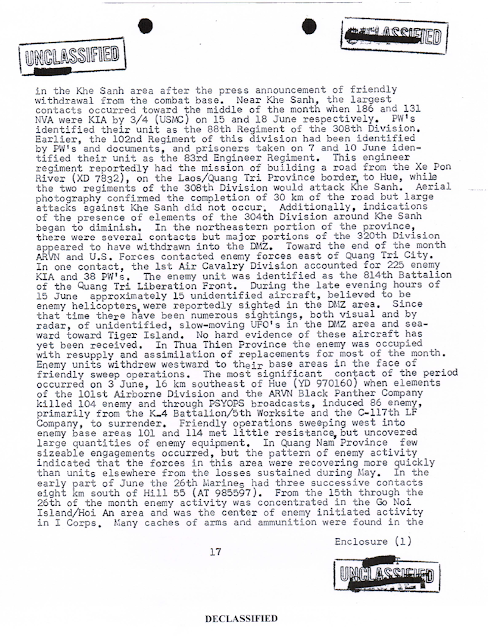 The United States Navy (USN) didn’t come up with any clear picture either. After searching through dozens of US Naval Forces, Vietnam “Historical Supplement” publications, I managed to locate the corresponding item for June, 1968. Titled “US Naval Forces, Vietnam Monthly Historical Supplement, June 1968”, and originally classified CONFIDENTIAL, discussion of the HMAS Hobart attack is concentrated on Page 5. It states:

“Air Force pilots called in response to earlier reports of enemy aircraft near the DMZ, reported shooting down several helicopters. However, no evidence of wreckage could be found. Subsequent investigation of the events indicated that, in the confusion following the initial reports of helicopter sightings, the friendly aircraft had attacked targets which appeared to be on radar. These radar targets probably included PCF 19. The use of helicopters by the enemy was neither conclusively proved nor disproved although observers ashore and MARKET TIME units continued to observe lights and other indications of helicopter activity along the North Vietnamese coast and between the coast and nearby Tiger Island.”

This publication was written well after the HMAS Hobart incident, yet confusion around what was actually flying in the DMZ is still very apparent. Specifically, “US Naval Forces, Vietnam Monthly Historical Supplement, June 1968” was signed off for distribution by Commander J. P. Rizza, Chief of Staff for US Naval Forces, Vietnam, on the 18th of Feburary, 1969, which is eight months after that fateful night. Most telling are the passages of text which state “…use of helicopters by the enemy was neither conclusively proved nor disproved…” and “…continued to observe lights and other indications of helicopter activity along the North Vietnamese coast and between the coast and nearby Tiger Island.”. I have imaged the page below. 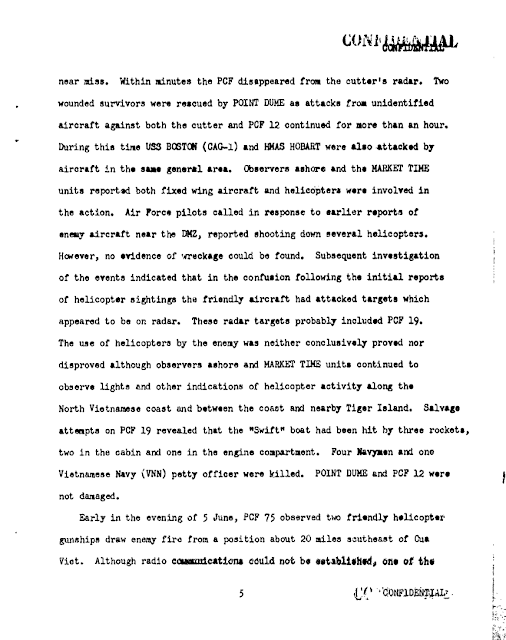 An Australian Prime Minister’s Department file, titled “HMAS ‘Hobart’ – Attack by United States Aircraft In Vietnamese Waters”, contains fifty–six pages of “cablegrams” and other teletype message traffic between the Australian Embassy in Saigon, Vietnam, the Australian Department of External Affairs, and the Office of the Prime Minister. Held now at the National Archives of Australia (NAA), the file was originally classified SECRET and was given the Control Symbol designation 1968/8614, within the A1209 filing Series. In a four page “inward cablegram”, dated the 31st of July, 1968, received by the Department of External Affairs, Canberra from the Australian Embassy, Saigon, it is stated that:

“No physical evidence of helicopters destroyed has been discovered in the area of activity nor has extensive reconnaissance produced any evidence of enemy helicopter operations in or near the DMZ.”

So, six weeks after the incident, despite “extensive reconnaissance”, the US military could not find “any evidence of enemy helicopter operations in or near the DMZ.”. I have imaged the page below. 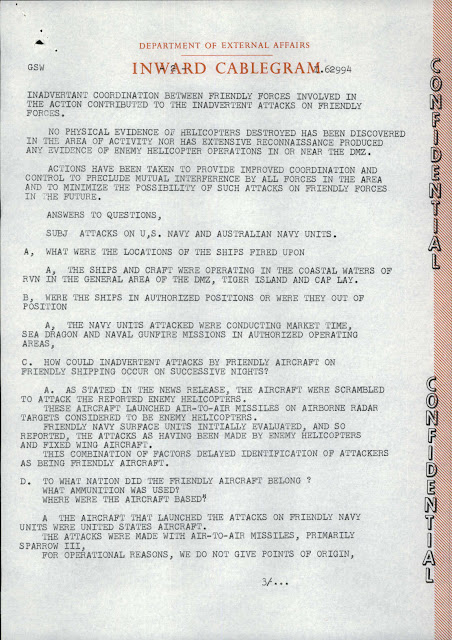 Even General Creighton W. Abrams, the Commander of all US Forces in Vietnam when HMAS Hobart was hit, refuted the notion that enemy helicopters were definitely operating in the Demilitarized Zone (DMZ). One of the US Army Press Corps carried a short statement from Gen. Abrams which was picked up by media organisations in the final week of June. One such example was printed in the Springfield Massachusetts Union on the 24th of June, 1968. It states, in part:

“Gen. Creighton W. Abrams, the US commander in Vietnam, said Sunday ‘there is no formal, concrete, factual evidence’ of enemy helicopters being used along the Demilitarized Zone.” 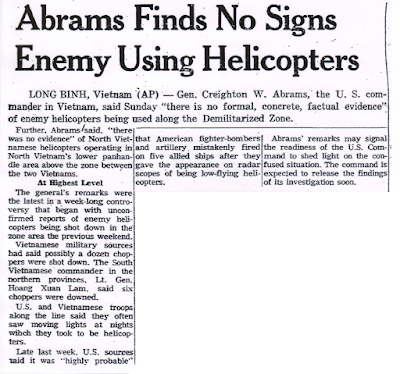 If the USA’s top General in Vietnam couldn’t confirm that all the strange activity in the DMZ could be readily accounted for, then we are somewhat forced to conclude that no one did.

To conclude, at least for now, I again raise the contents of Part 1 of this series. There, I discussed the contents of “Project CHECO South East Asia Report: Air War In The DMZ September 1967 – June 1968” which highlighted, amongst other curiosities, a “joint service conference on the UFO problem”, as well as authorized “projects” that were “established to observe the UFOs”. Further, In this Part 2, I have presented detailed, official records that establish a high level of confusion during the period leading up to the USAF’s accidental strike on HMAS Hobart. The constant utilization of the term “UFOs”, at all levels of military officialdom, indeed matches some of the rumours that circulated in June, 1968 and beyond. That the USAF, and indeed the whole US Armed Forces in Vietnam, were totally unable to present verifiable information – either in public statements, classified records, or anywhere else – that North Vietnamese choppers were intensely active in the DMZ is undeniably significant, and, many would argue, rather disquieting.

Moreover, none of this activity was filed with Project Blue Book, the USAF’s official collection and investigation of UFO reports. This wasn’t merely a case of administrative bungling or misplaced records. It was, however, another example of systematic deception by the US military in regards to what was really going on. When the Secretary of the USAF, Dr. Robert C. Seamans, Jr, announced, on the 17th of December, 1969, that no UFO reported, investigated and evaluated was “ever an indication of threat to our national security”, one can’t help but suspect that he simply had no idea what was really occurring.

Finally, I have imaged, below, the front covers of some of the documents which I have presented to assist other researchers to verify what I have displayed and discussed. These are the cover pages for the records “III Marine Amphibious Force, Air Ground Team, Command Chronology, June 1968”, “US Naval Forces, Vietnam Monthly Historical Supplement, June 1968” and the Australian government file “HMAS ‘Hobart’ – Attack by United States Aircraft In Vietnamese Waters”. 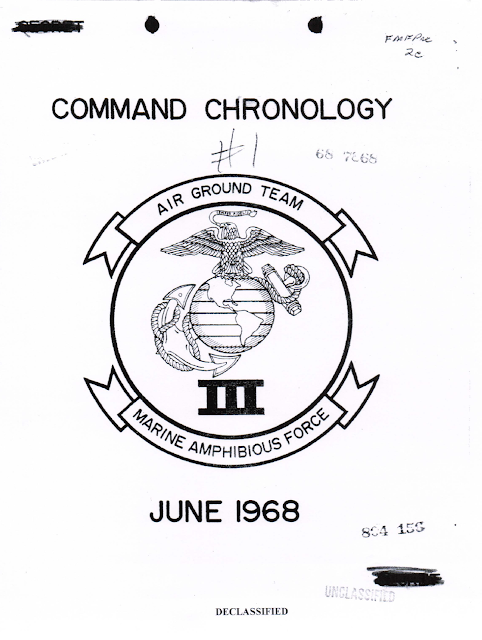 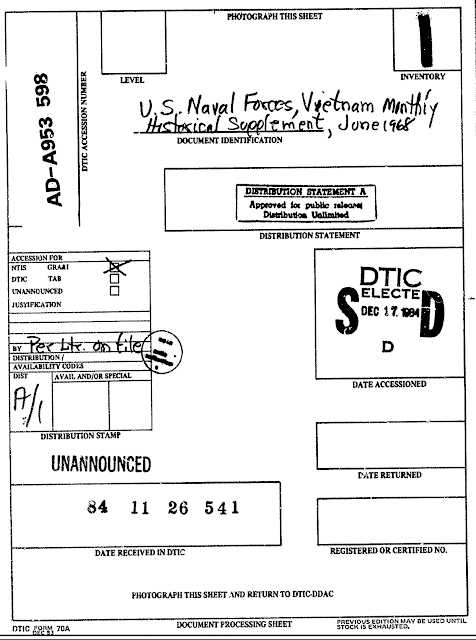 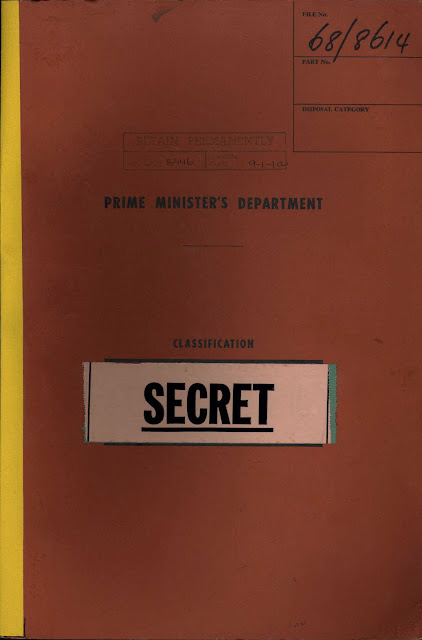