Luis Elizondo, The Defence Office of Prepublication
and Security Review, and a "DD Form 1910" Chain of Custody

Part 1
In the last few months a formal, hitherto unknown US Department of Defence (DOD) program to study the UFO phenomena has been revealed. Located within the massive Defence Intelligence Agency (DIA), the “Advanced Aerospace Threat Identification Program” (AATIP), began in 2007, and was dissolved in 2012. Beyond that, and yet to be formally admitted, the work of AATIP was apparently migrated to an new interagency partnership where it is still ongoing today. The AATIP effort, for most of its existence, was headed by DOD staffer, Luis Elizondo, whose career has been spent in specialised defence intelligence, counter–intelligence and security roles. Since his departure, last year, from the DOD, Elizondo has appeared in numerous media interviews regarding the AATIP program, but avoids detailing specific security classified information. Acres and acres of discussion about the AATIP issue  has, unsurprisingly, taken place on social media and in the press. I do not aim here to further highlight what has already been revealed, or what hasn’t. My intention, as always, is to provide primary documentation, or other solidly sourced narrative.

On top of AATIP’s sudden exposure, two segments of airborne video footage were released that purport to show unidentified, airborne objects. The first piece of footage, and its wider story, was already known to researchers, and is generally referred to as the “Nimitz” or “Tic Tac” UFO case. The second piece of footage, which was entirely new, is known as the “Gimbal” event. The former occurred in 2004 off the coast of California, and involved multiple F/A–18 Super Hornets assigned to the USS Nimitz. The latter occurred in 2015 off the coast of Florida, and involved similar aircraft. Again, my aim is not to go over, ad nauseum, these two events, or their associated video footage. Others have done so, and work is ongoing.

One question that has arisen about these two videos, though, is the issue of DOD endorsement and formal release. Elizondo, and others, such as reporter Leslie Kean, have claimed that defence authorities formally permitted the open presentation of the material, and that a documented “chain of custody” was in existence. Again, it should be noted that the “Nimitz”, or “Tic Tac”, footage was already known, as it had been leaked to an online source, by USN personnel, quite a few years ago. Also, the newer “Gimbal” footage, as I have discovered, was also leaked by USN personnel, though not to an online server for all to see. Informal, isolated leaks aside, Elizondo understandably wished to see that these segments of unusual footage were as properly accounted for as possible, as did those he has confided in. Working with a number of interested parties, either directly or indirectly, which have included an unusual outfit known as the “To The Stars Academy” (TTSA), plus The New York Times, Bigelow Aerospace, and others, Elizondo has not, as yet, demonstrated exactly how he had the videos were declassified or otherwise released. Researchers, and the wider public, have yet to see copies of any “chain of custody” documentation.

Early on, I had assumed that Elizondo had utilised the US Freedom of Information Act (FOIA) to see that the videos were released, but my rather forceful enquiries with the DIA and Office of the Secretary of Defence and Joint Staff (OSD/JS) had demonstrated that this was probably not the case. Likewise, I engaged in lengthy telephone correspondence with staffers at the Assistant to the Secretary of Defence for Public Affairs (ATSD/PA), but they couldn’t shed any light on the matter either. Upon talking to someone heavily involved in this affair, I was able to recently learn that Elizondo had used an internal DOD records–release channel unrelated to the FOI Act. My confidant wasn’t entirely comfortable with telling me exactly what this method was without consulting with Elizondo himself, and I didn’t further push the matter. Put simply, I didn’t know how the videos were formally released, but that has  now changed.

On the 25th of February, 2018, Elizondo was interviewed by reporter George Knapp for the radio podcast show “Coast to Coast”. In that presentation, Elizondo revealed that he used the services of the Defense Office of Prepublication and Security Review (DOPSR). In conjunction with that effort, Elizondo said he utilised a pair of DOD publications which govern the clearance and release of certain information to the public. Importantly, Elizondo stated that the actual document he used was a “DD Form 1910”.

Specifically, DOPSR is an office which resides within the Office of the Secretary of Defence (OSD) and is “responsible for managing the Department of Defense security review program, reviewing written materials both for public and controlled release”. They coordinate “official work products with Defense enterprise stakeholders to ensure that information being released is both accurate and represents the Department’s official position”. The two publications at the center of Elizondo’s video release efforts are “DOD Directive 5230.09, Clearance of DoD Information for Public Release”, which was certified as current on the 22nd of August, 2015, and “DOD Instruction 5230.29, Security and Policy Review of DoD Information for Public Release”, which was promulgated on August the 6th, 1999. As mentioned, the form Elizdono apparently used was a DOPSR–issued “DD Form 1910”. Its title is “Clearance Request for Public Release of Department of Defense Information”. Completed forms are submitted to the Chief of DOPSR, and a copy is sent for coordination with to the DOD’s Director for Freedom of Information and Security Review (DFOISR). Copies of whatever material, be it documents or audio–visual material, that the applicant wants released are submitted with the “DD Form 1910”, and processing can take weeks or months. A sample copy of the form, which is two sided, is imaged below. 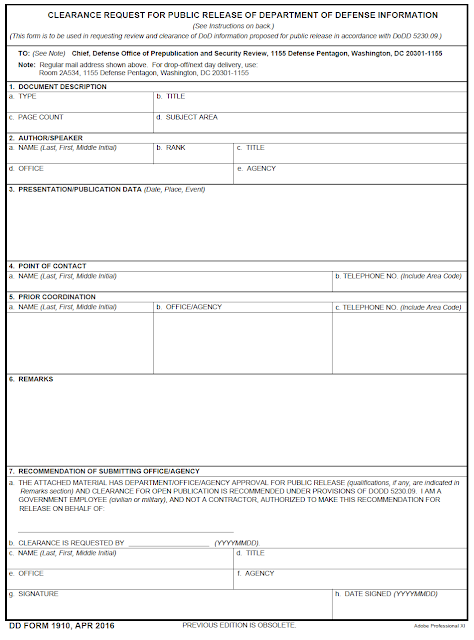 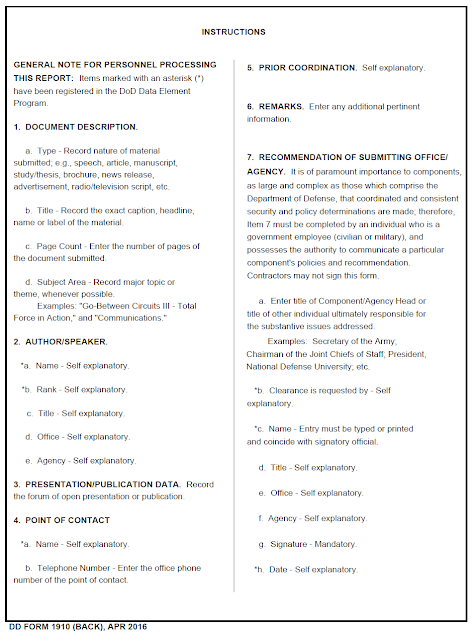 The DOPSR “DD Form 1910” is self–explanatory, for the most part. There are fields, or blocks, for a names, a signature, a date, subject matter areas, prior co–ordination of the subject material, office address information, etc. However, I am not exactly sure, at this stage, what information would be placed in some of the fields.

On the 1st of March, 2018, I submitted an FOI request to the Office of the Secretary of Defence and Joint Staff (OSD/JS) for a copy of this record. Explicitly, I stated, in part:

“This is a request for information under the US Freedom of Information Act (FOIA). I am requesting a specific document which were recently processed by Defense Office of Prepublication and Security Review (DOPSR). The document is a “DD Form 1910”. It was utilised by a former DoD employee, Luis Elizondo, to see that some audio–visual clips (airborne FLIR videos from US Navy aircraft) be formally released to the public for educational or publication use. Elizondo headed up, some years ago, the much–discussed Advanced Aviation/Aerospace Threat Identification Program (AATIP). When he resigned from the DoD, he wished to utilise various DOD audio–visual material as part of a wider, civilian program. Thus, he used a DD Form 1910. Defense Office of Prepublication and Security Review (DOPSR), or associated agencies, must have a copy of the DD Form 1910 in question.”

I was immediately furnished with an automatic reply from the DOD’s FOI Office. In it, I was given an FOI case number, which was “18–F–0601”. On the 2nd of March, 2018, I was furnished with a more formal, if interim, response from the same office. DOD FOI Specialist Sean Porter enclosed a scanned letter from Stephanie L. Carr, who is the long–suffering Chief of the DOD’s FOI Office. In it, Carr states, in part:

“This is an interim response to your enclosed March 1, 2018 Freedom of Information Act (FOIA) request, a copy of which is attached for your convenience. We received your request on March 1, 2018, and assigned it case number 18–F–0601. We ask that you use this number when referring to your request.

Although we have already begun processing your request, we will not be able to respond within the FOIA’s 20–day statutory time period as there are unusual circumstances that impact our ability to quickly process your request. The FOIA defines unusual circumstances as (a) the need to search for and collect records from a facility geographically separated from this office; (b) the potential volume of records responsive to your request; and (c) the need for consultation with one of more other agencies or DoD components having a substantial interest in in either the determination or subject matter of the records. At least one, if not more, of these scenarios applies or would likely apply to your request. While this office handles FOIA requests for the Office of the Secretary of Defense (OSD), the Joint Staff (JS), and other component offices, we don’t not actually hold their records and our office is not geographically located with these organizations. As we do not hold the records, until the required records searches are complete, we are unable to make a release determination.

Your request has been placed in our complex processing queue and is being worked based on the order in which the request was received. Our current administrative workload is approximately 2,246 open requests.”

This is a standard response, no matter what the FOI request entails. I have received the exact same letter on other occasions. While it is certainly true that the OSD/JS FOI desk is inundated with requests for DOD material, I would argue that my request shouldn’t be placed in the “complex processing queue”. After all, I am asking for a copy of just one document, so the statement about the “potential volume of records responsive to your request” is hogwash. Searching for it shouldn’t be an issue, as the record was only generated last year. Also, I have given the OSD/JS FOI desk a very likely filing location, which is, of course, the DOPSR office. The statement about the record potentially being at “a facility geographically separated from this office” could be argued on technicalities either way. Both the OSD/JS FOI desk and DOPSR are located in the Pentagon though. One issue that may cause some complexity is the potential need for “consultation with one of more other agencies or DoD components” which have a “substantial interest in in either the determination or subject matter of the records”, but even this is debatable. Whatever the situation, my hands are probably tied. Short of me ringing the OSD/JS and reminding them of their responsibilities under the FOI Act, which is something I have done with varying degrees of success in the past, we are going to have to wait. Stephanie L. Carr’s letter is imaged below. 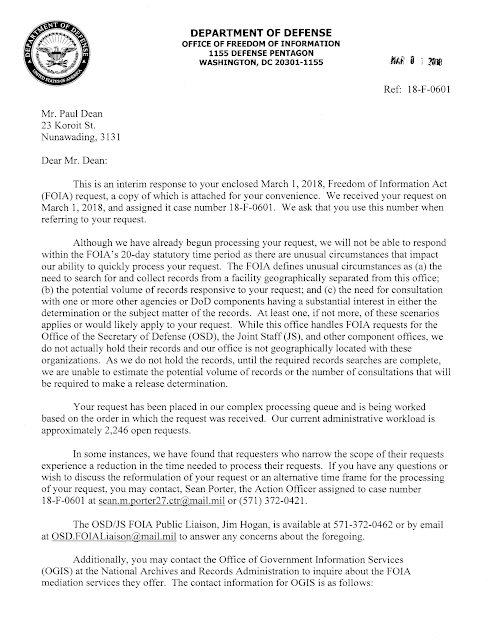 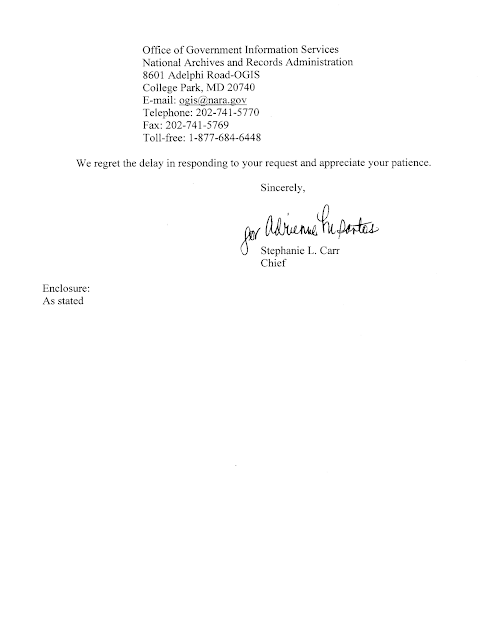