On the 16th of December, 2017, the New York Times presented an article, penned by Helene Cooper, Ralph Blumenthal and Leslie Kean, concerning a hitherto unknown UFO case analysis effort which had resided at the Defence Intelligence Agency (DIA) from 2007 to 2012. The program has cited as the “Advanced Aerospace Threat Identification Program” (AATIP), and was headed, for the most part, by a Department of Defence (DoD) staffer named Luis Elizondo. Myriad deliberation about the AATIP endeavour has taken place in the press and on social media. Recently, I have discussed the fact that the AATIP program was borne from, or was included within, a more formal DIA–based program known as the “Advanced Aerospace Weapons Systems Application Program” (AAWSAP). Actually, the exact name was possibly the “Advanced Aerospace Weapon System Application” (AAWSA) with the term “Program” not quite formally tacked on at the end, and the pluralization of the word “Weapons” and “Systems” dropped. Either way, this lesser known program was apparently housed at the Defence Warning Office (DWO) of the DIA’s Directorate of Analysis. Swedish Researcher Roger Glassel and myself discovered all this business independently of each other, and I was thankful for some confirmation. Freedom of Information Act (FOIA) requests have been submitted to the DIA and the Office of the Secretary of Defence and Joint Staff (OSD/JS), and should be processed within, well, months or years.

In the original New York Times article, the Nevada–based aerospace company “Bigelow Aerospace” was revealed as the major participating contractor for AATIP’s UFO research efforts. The article stated that the “…funding went to Mr Bigelow’s company, Bigelow Aerospace, which hired subcontractors and solicited research for the program”. We wondered at the time whether or not it would be possible to locate any of these subcontractors. Of course, some, by their own admissions, have already been identified. In January, 2018, Dr. Eric Davis and Dr. Hal Puthoff, during radio podcast interviews with George Knapp on “Coast to Coast”, revealed that they been involved in Bigelow Aerospace’s portion of AATIP’s work. But what about other subcontractors? On the 7th of January, 2018, a person with the username “Mirageman”, who one assumes is none other than author Mark Pilkington, published a lengthy tome on the “Above Top Secret” website titled “Bigelow, UFOs, MUFON and the ‘DeLonge’ road to AATIP”. In a section relating to early discussions between Bigelow and the Mutual UFO Network (MUFON), the author wrote:

“...Bigelow was contracting up to fifty scientists, some designated to be on the scene within twenty–four hours after significant UFO incidents, to perform investigations and analyse any data the MUFON investigators had collected.”

Who all these scientists were, few seem to know. Roger Glassel’s recent blogpost, which is hosted at Curt ’Collins “Blue Blurry Lines” site, provided a lead. He wrote:

“By searching on the AAWSA name I also found a LinkedIn profile of a person in the Nevada area that had worked for Bigelow Aerospace between 2009 and 2010. More specifically, he was employed ‘in an interdisciplinary team of scientists and engineers studying advanced aerospace weapon system applications including lift, propulsion, control, power generation, signature reduction, material and armament’.”

Immediately after reading Glassel’s blog post, one of the authors, Keith Basterfield, searched the LinkedIn website and located this individuals profile using various keywords. Within the profile, there is indeed a section stating that the person worked as a “Research Engineer” for Bigelow Aerospace between August, 2009, and June, 2010. This time frame fits in with the date range that the New York Times, and Luis Elizondo, have quoted regarding AATIP’s existence. As we have come to learn, the AAWSA Program, and the AATIP UFO sub–effort, were inextricably linked.

Importantly, there is a substantial quantity of added information. Starting from the top, the first few lines of which had already been highlighted by Glassel, the whole segment reads:

• Perform field measurements collecting data regarding ionizing radiation as well as performing chemical/metal/soil and spectrum analysis across the United States in accordance with the code of federal regulations, ANSI, IEEE and ASTM standards and EPA, USGS, DOE and DOD procedures.

• Responsible for training engineering/scientist team on proper use of equipment safety/procedure guidelines.

On the 1st of May, 2018, I exchanged communications with Curt Collins and confirmed that this was indeed the individual whom Glassel had referred to in his blogpost. In other words, this name matched the individual Keith Basterfield had already found. The significance of the above material is that, for the first time, we have a large part of a what could be called a “job description” of a person who conducted scientific investigation for AAWSAP/AATIP. Activities like “…collecting data regarding ionizing radiation as well as performing chemical/metal/soil and spectrum analysis across the United States…” certainly sound like UFO case investigation and analysis work to me! I have imaged the actual section of the LinkedIn page below. 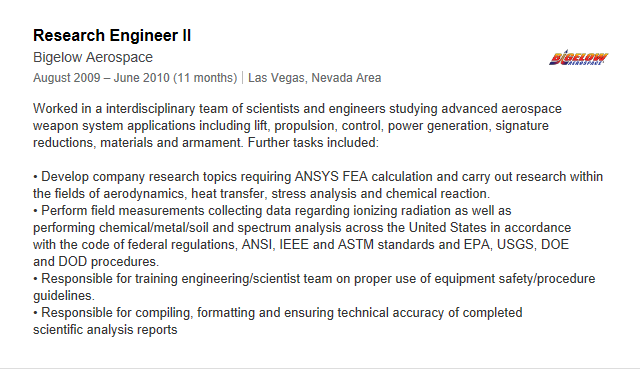 Even Dr. Eric Davis doesn’t appear to have been involved in real time, in–the–field UFO case analysis while work with AATIP. In his January, 2018, radio interview on “Coast to Coast”, Davis specifically stated that he undertook no data analysis, nor video analysis, nor performed witness interviews. These investigatory tasks were apparently done by individuals like the one located on LinkedIn. Going back to the LinkedIn profile, it is worth outline what some of the listed acronyms refer to. “ANSI”, for example, refers to the American National Standards Institute; the “IEEE” is the Institute of Electrical Engineers; the “ASTM” is the American Society for Testing and Materials; The well–known “EPA” is the Environmental Protection Agency; the “USGS is the United States Geological Survey; the “DOE” is the huge Department of Energy; and obviously the “DOD” is the Department of Defense.

Finally, we have conducted a further search of the LinkedIn platform with the aim of finding other individuals who worked within the AAWSAP/AATIP network. As yet, we haven’t had much luck. Meanwhile, Keith Basterfield has forwarded a request to the individual identified by Glassel, Collins and ourselves asking them if they would be willing to talk to us about the work they undertook for the program. No response has been received, as at the date of this post.
Paul Dean at 04:31
Share