Usually, when I study a UFO related topic, I offer a full, foundational treatment, complete with in-text-referencing from primary sources, images of old records, and a complete chronological history of whatever matter I’m exploring. The subject I aim to discuss here, however, is not worth such a laborious or scholarly effort. In fact, dealing with it at all brings my conscience out in a rash.

A four-page document, which purports to be a top-echelon “Special National Intelligence Estimate” (SNIE) has been circulating, and gaining traction, within the UFO community. Pretending to have been completed on the 5th of November, 1961, the SNIE is titled “US INTELLIGENCE COMMUNITY AND MJTWELVE OPERATIONS  A SPECIAL NATIONAL INTELLEGENCE ESTIMATE” and was purportedly prepared for the President’s Foreign Intelligence Advisory Board (PFIAB) by a handful of high-level national security entities. The subtitle of this discombobulated mess is “Critical Aspects of Unidentified Flying Objects and the Nuclear Threat to the Defense of the United States and Allies”, and the supposed serial number is “No. 1-61-E”. Briefly, the subject matter relates to the retrieval of crashed UFO’s, and the risks of nuclear war with the Soviet Union after such events. Researchers Danny Silva and Joe Murgia have presented the document here, here and here. The Black Vault dealt with some of the technical points to the document here.

I first saw this document quite some time ago, and it was the spelling and grammatical errors which immediately caught my attention. The word “Israelis” is misspelt as “Israelies”. The word “parody” should be the word “parity”. And, most outrageously, in the capitalised title, the word “Intelligence” is misspelt as “Intellegence”. Are we expected to believe that senior intelligence officials cannot even spell the very word that their life-long craft is based on? The grammar is just as bad. The phrase “In pursuant to…” should be “In pursuance to…”. The phrase “misguided suspicions…” should probably be “misplaced suspicions…”. And what the hell are “…CIA and DoD postmortem studies…” for a nuclear war that has never occurred? Also stated is that “…It is doubtful that China has a nuclear attack capability at the present time…”. One would think that real authors, being at this level of national security governance and critical intelligence evaluation, would have had a better handle on China’s  nuclear weapons status, or total lack-thereof, by 1961. In fact, China didn’t conduct its first atomic test until October, 1964, and any “nuclear attack capability” came nearly a decade later. There are half a dozen similar historical problems with the obviously problematic SNIE document, but there’s only so much time one can spend raising them all.

The mention of certain government agencies, which didn't even exist in 1961, is far worse. The Joint Research and Development Board (JRBB) went out of existence in late 1948, and was replaced by the Research and Development Board (RDB), which was then abolished in 1953. Then, we see the Joint Nuclear Energy Intelligence Committee (JNEIC) named, yet it was replaced by the Joint Atomic Energy Intelligence Committee (JAEIC) in 1948. In fact both are named, but only the JAEIC existed in 1961 when the document was allegedly authored. The hoaxers should have made up their minds and settled only on the JAEIC. Even worse is the listing of the CIA’s Deputy Director for Operations (DD/O). This is impossible because it didn’t exist until 1973. In 1961 it was called the Deputy Director for Plans (DD/P). Just as bad is the mention of the CIA’s Foreign Broadcast Information Service (FBIS). It didn’t exist, as an organisation at least, in 1961 either. It was technically called the Foreign Broadcast Information Division (FBID) back then, and wasn't until 1965 that the FBID transitioned to the fully office level FBIS. Ooops. The Los Alamos National Laboratory (LANL) is mentioned, but in 1961 it was the Los Alamos Scientific Laboratory (LASL). It wasn’t until 1981 that LASL became LANL. Having said that, some LASL staffers, ostensibly, used the term “Los Alamos National Laboratory” or “LANL” on select formal LASL documents. One researcher, who would prefer not to be named, remembers seeing such records, but none have been openly supplied. Either way, the use of incorrect, if otherwise internally utilised, terminology in such an important document seems unlikely. The impossible organisational red flags I've highlighted are more than enough to warrant extreme suspicion, if not outright scorn. Finally, the document mentions the hoax “MJTWELVE” group, and we all know where that leads. No more discussion on that affair is worth anyone’s time, especially mine.

As but one primary source example of the aforementioned impossibilities, I have imaged a page, below, from the “History of the the Central Intelligence Agency” section contained in the US Senate’s April, 1976, publication titled “Final Report of the Select Committee To Study Governmental Operations With Respect to Intelligence Activities”. Both the DD/O and the FBIS are indexed as only coming into being years after the fake 1961 SNIE hoax document pretends to be from. Specifically, and as I found two years ago, and find yet again for this piece, the Directorate for Plans, otherwise known as the DD/P, is listed as being “renamed” as the Directorate for Operations, or DD/O, in 1973. Further down, we note that the Foreign Broadcast Information Division, or merely the “FBID”, was “renamed” as the Foreign Broadcast Information Service, or “FBIS”, in 1965. Unless someone was time travelling, the creation of the 1961 SNIE with such post-1961 government entities, is utterly impossible. 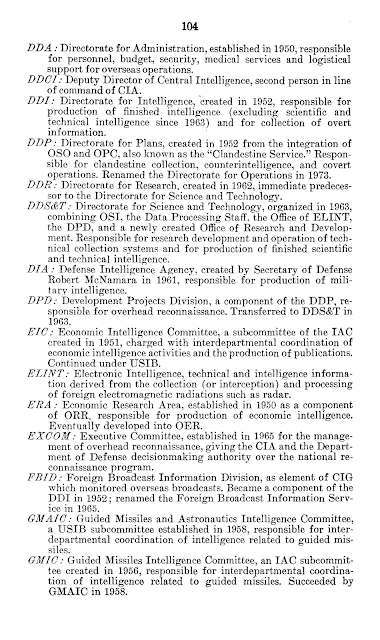 Other red flag issues involve a handful of government entities that should have been involved in the production of such an SNIE, but oddly weren't. The NSA's Scientific Advisory Board is listed as being one of the authors, but not the United States Intelligence Board's (USBI) powerful and vital Signals Intelligence Committee (SIGINT Committee). Other USIB committees were involved, but not them. More tellingly, the USIB's Watch Committee (WATCHCOM) wasn't part of the story, yet they were, in the 1960's, responsible for early warning intelligence, which is exactly what the fake SNIE is all about! Another committee which should certainly have aided in penning such a document was the USIB's Critical Collections Problems Committee (CCPC), but they are suspiciously missing as well. Problems, too, arise in relation to the SNIE's dubious referencing of two high level, but legitimate, documents some time earlier. “DCID 5/1” was issued in December, 1959, by the Director of the CIA, and was titled “Coordination of US Clandestine Foreign Intelligence Activities Abroad”. While it hasn't been released in full, it had nothing to do with UFO’s. An associated Joint Chiefs of Staff (JCS) memoranda discusses its contents at length. “NASM 70” was issued in August, 1961, and was titled “Request for Report on Berlin Situation”. It's been released in its entirety, and it had nothing to do with UFO’s either.
Even the security classification, which is “TOP SECRET UMBRA”, is highly questionable. To date, no early 1960's “UMBRA” codenamed records have been discovered. Before “UMBRA”, the equivalent codewords were “TRINE” and “DINAR”, and examples of such material is myriad. My rigorous study of declassified intelligence records from the early 1960's yielded hundreds and hundreds of varied items with the “TRINE” and “DINAR” compartment. Significantly, the term “UMBRA” is utterly missing from the record prior to the late 1960's, and no serious historian has cited any earlier records with the “UMBRA” stamp. In fact, according to one US Navy cryptology history group, the “UMBRA” codeword wasn't in use until December, 1968. They should know. The old Naval Security Group (NSG) was responsible for highly classified USN message traffic and cryptography across the globe. Performing a range of scrambling and de-scrambling, signals intelligence processing, radio traffic encryption and message relay, the NSG worked, in part, for the Central Security Service (CSS). The CSS, of course, was the military arm of the NSA, and the use of the “TRINE”, “DINAR” and “UMBRA” codewords was routine.

Finally, the most suspicious issue with this SNIE document is where it was first place online, and by whom. A discussion of the document, along with links to the actual images, has been sitting here for a decade. Down the bottom there is the name “Peregrine Communications”. And who might they be? They are the one-time publisher of the book “Exempt from Disclosure”. The authors of this short tome are none other than Robert M. Collins, Richard C. Doty, and Timothy Cooper. There are no greater document fakers in UFO history than these three. If one goes to an Amazon listing for this book, which can be found here, the publisher is listed as, you guessed it, “Peregrine Communications”.

So, with all this in mind, I am offering $1000 (USD) to the first person who obtains a formally, officially declassified version of this SNIE record. We know the name of it. We know the date. We know that SNIE’s are top-level records. It even has a code number. With Freedom of Information Act (FOIA) work, or some other archival access provision, in mind, the document should be sitting there in a box just waiting to be requested and released. SNIE’s are not written lightly, or in large volumes. Researcher Jeffrey T. Richelson, whom I worked with extensively before his untimely death, wrote about their significance in his famed book “The US Intelligence Community”. Further, real SNIE’s from the 1960’s have been released in the last twenty years, so it's not like they are untouchable. In anyone wants to take me up on this offer, I’m all ears. It’s an easy $1000 right? We can work out the finer points later, but I think we all know there's little need. My money is safe. The document is a fake. And it's a bad one.
Posted by Paul Dean at 05:06